This is the second installment of the three-part Wild Reed series featuring excerpts from my friend Robert Caruso’s recently-released book, The Old Catholic Church: Understanding the Origin, Essence, and Theology of a Church that is Unknown and Misunderstood by Many in North America.

This particular excerpt provides an informative and concise explanation of the importance of the conciliar nature of the church for Old Catholicism.

(NOTE: To start at the beginning of this series, click here.)

Old Catholic theologians of the Union of Utrecht recognize that conciliarism was a lived experience since the apostolic age of the early church. Since ancient church times, local churches always maintained faith-based relationships with other local churches that would come together in council when important matters needed to be discussed. The conciliar nature of the church was not created but received in all humility by humanity as a gift (grace) from God. Further stated, the conciliar church is relational in that it reflects the communal nature of the divine Trinity, celebrating unity in diversity. For this reason the early ecumenical councils, albeit important and foundational to Old Catholic faith and theology, in ho way exhaust the concilar definition of the church. Rather, a council of this sort is an event, a “reflection and manifestation of the conciliar nature of the church.

When the Roman Empire eventually adopted Christianity as its state religion the church gradually moved away from its organic and relational (conciliar) character to a more imperial and sovereign hierarchal power structure, i.e., the centralization of church authority gradually assumed by the pope (the bishop of Rome). It is during the Middle Ages that conciliar ideas resurface amidst the imperial power structure of the papal Western Church through its ecclesiologists and canon lawyers. Conciliar theory eventually evolved into a Western Church historical movement in the mid-thirteenth to early fifteenth-centuries that would rival papal authority, and culminate theory into reality at the great council of Constance in 1414 CE.

The conciliar theory movement in the fourteenth-century was an epic moment in church history because it attempted a major paradigm shift in transferring ultimate ecclesial authority to an ecumenical council, superior even to the pope. The Old Catholic churches of the Union of Utrecht are remnant heirs of the conciliarist movement and cannot be understood apart from it. In order to fully comprehend the complexity of the conciliar movement, a concise study of the internal powers of the early and medieval church’s organization is necessary; this implies that medieval canon law, common law, and ecclesiology (theology of the church) are intricately related to the conciliar theory. And conciliarism cannot be fully understood outside these parameters. . . . 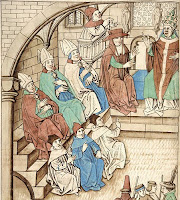 The . . . developments on conciliar theory culminated at the ecumenical council of Constance (1414-1418), “. . . the last council of the Western Church that spoke with one voice.” The council was called forth to end the Great Schism of 1378 and reform the church. Constance was a unique council because it was evoked by the whole church (lay, clergy, and bishops), and its authority is unquestionably recognized historically in the Roman church to date. The council produced a text entitled Sacrosancta, which has been referred to as the most revolutionary reform document ever produced by the Catholic Church. The ideas expressed in this ecumenical treatise stated, “The whole Christian community was superior to any prelate, however exalted; the Pope was to be a servant of the Church rather than its master.” It is from the council of Constance that a new pope was elected (Martin V), and through this council the newly elected pope (and all his successors) was canonically given apostolic authority and succession in the Roman Catholic Church.

This section further argues, based upon the authoritative claims made at the conciliar council of Constance, against the so-called papal divine rights of jurisdictional supremacy over the entire Church and its members, as well as the infallibility of the pope. The council of Constance lucidly proclaimed in its fourth and fifth sessions that “. . . this holy Synod of Constance, being a General Council lawfully assembled in the name of the Holy Ghost, and representing the Church militant, has received immediately from Jesus Christ a power to which all persons of whatever rank and dignity, not excepting the Pope himself, are bound to submit in those matters which concerns the faith, the extirpation of the existing schism, and the reformation of the Church in head and in members,” further stated, “. . . the Council of Constance declared explicitly that a general council is above the Pope, and can judge or even depose him.” Clearly, the divine right of the church was not to be found in the papacy alone; but rather, it was to be found in the congragatio fidelium (the body of the baptized) in general council together as the body of Christ being tenderly guided by the Holy Spirit. Therefore it can be persuasively argued that the council at Constance, albeit not perfect because it burned John Huss at the stake as a heretic and did not enforce a reform in the church, did canonically validate and procure the pope’s limited apostolic authority and Petrine succession by the divine guidance of the Holy Spirit. Thus, the current monolithic school of thought in the Roman church – that claims the papacy is directly established by the Triune God – was challenged.

Consequently, conciliar theory rather than papal primacy helps to compose the colorful and contextual background needed to fully comprehend and appreciate the Old Catholic movement in lieu of papal supremacy. The council of Constance is significant for Old Catholics because its conciliar authority was real, and it established precedence in the Catholic Church that power can be and should be properly delegated by all the faithful, and not exclusively in the plenitude potestasis (complete power) of the papacy. Hence, the institutional papal claims of divine right of supremacy became the main theological and political crux that would later form the Old Catholic movement in the mid- to late nineteenth-century.