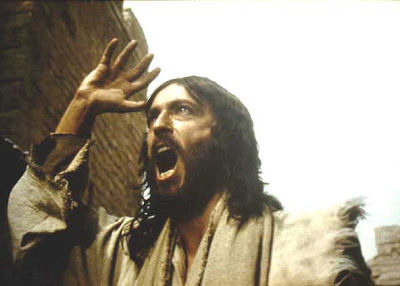 
Of one thing we can be reasonably certain: the event that precipitated Jesus’ arrest and so his death was the turning over of the money changers’ tables in the Temple. Everything that Jesus had preached on his journeys throughout Galilee – spiritual and economic egalitarianism, the need to exist in direct, unmediated relationship with God – exploded in one all-embracing act of holy indignation performed at the heart of religious and political power.

Jesus was not just “purifying” the Temple by overturning the tables; he was symbolically destroying it. His was a consciously iconoclastic act.

. . . Such an act, in the troubled atmosphere of Passover, amounted to direct provocation. Did Jesus want to be delivered to the authorities and martyred? Did he believe that such a martyrdom would inspire the repentance and transformation of his people? Did he expect his act of divine blasphemy to shock his contemporaries into a higher awareness, to be a kind of furious initiation into a new life? We cannot know. My own belief is that Jesus knew exactly what he was doing and what he was risking, and that his willingness to risk death did not reflect any lust for martyrdom or any self-conscious mystical desire to enact the part of the Messiah, but the holy desperation of someone who understands that in certain circumstances the only possible choice is one of open rebellion against injustice and oppression, whatever the results.

The time had come for Jesus to risk being a sacrifice for his revolutionary ideas. Conceivably, Jesus could have survived the hatred of the religious and political authorities that his teaching had aroused by hiding or continuing to teach in small villages or open country, but how could such a political withdrawal effect the kind of transformation of society he knew was essential? The passion of his vision of the Kingdom and the agony of tenderness for all beings that propelled it, propelled him to the moment when he crystallized all of his anger, hope, prayerfulness, and social and political ideals in one symbolic iconoclastic act that he knew would risk his life.

. . . The time had come to risk everything and sacrifice everything for the Kingdom; to demonstrate in his own being and action the total fearlessness and boundless courage that divine love demanded of anyone who wanted to be an instrument of justice and mercy, to reveal the full majesty of that divine identity that could suffer and triumph over even the most terrible of ordeals.


NEXT: One Overwhelming Fire of Love


To start at the beginning of this series, click here.


See also the previous Wild Reed posts:
The “Incident” in the Temple
The Passion of Christ (Part 2): Jesus Drives Out the Money Changers/The Eros of Anger
Pasolini’s “Wrathful Christ”
Why Jesus is My Man
An Enlightened Exploration of Integrity and Obedience
Revisiting a Groovy Jesus (and a Dysfunctional Theology)
What We Can Learn from the Story of the Magi