This latest installment in The Wild Reed's series on the Turkish city of Istanbul also serves as an appropriate segment of my ongoing series, "The Dancer and the Dance." For as you'll see, I share today another excerpt from Jason Goodwin’s compelling and entertaining novel The Janissary Tree, an excerpt that sheds light on an ancient and fascinating dance tradition of that region of the world once known as the Ottoman empire and now called Turkey.

As I've noted previously, The Janissary Tree is actually the first in a series of novels that center on the adventures of Yashim Togalu – investigator, confident of sultans, linguist, chef, and eunuch. The series is set in the mid-nineteenth century and predominately in the Ottoman capital of Istanbul.

In the following excerpt from The Janissary Tree, Yashim, in his search for information about the disappearance of four young officers from the empire's controversial New Guard, visits his transgender friend Preen, a köçek dancer. 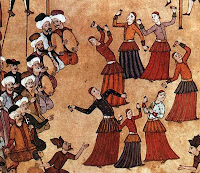 Of all the traditions that bound Istanbul together, the long history of the köçek dancers was probably the least celebrated and possibly the oldest. Some said that they were descended – in a spiritual sense – from Alexander’s dancing boys. The foundation of Constantinople would have occurred almost a thousand years after the köçek tradition had migrated from its homelands in northern India and Afghanistan to the frontiers of the Roman Empire. The köçek were creatures of the city, and the rise of the city on the banks of the Bosphorus would have sucked them in like dust to a raging fire. What was certain was that the Greeks had entertained these dancers, selecting them from the ranks of boys who had been castrated before puberty and subjecting them to rigorous training in the stylized arts and mysteries of the köçek dance. They danced for both men and women; under the Ottomans, it was usually for men. They performed in troupes of five or six, accompanied by a musician who plucked at a zither while they whirled and stamped and curved their wrists. Each troupe was responsible for engaging new “girls” and training them. Many of them, of course, slept with their clients, but they were adamantly not prostitutes, whom they regarded as utterly wanton – and unskilled. “Any girl can open her legs,” Preen had once reminded him. “The köçek are dancers.”

But it was undoubtedly true that the köçek were not too picky about their friends. They stood on the very lowest rung of Ottoman society, above beggars but with jugglers, actors, conjurers, and others who made up the despised – and well-patronized – class of professional entertainers. They had their snobberies – who doesn’t? – but they lived in the world and knew the way it turned.

Yashim had at first been amused by Preen and her “girlfriends.” He liked the open way they spoke, the roguishness and candor, and in Preen he came to admire the chirpy cynicism that concealed a heart plunged in romantic dreams. Compared to the heavy secrecy and dark glances of the Phanariot aristocracy, Preen’s world was rough but full of laughter and surprises.

“Come on in.” She twirled from the door and returned to her face in the mirror. “Can’t stop, sweetie. The other girls’ll be here in a moment.”

“A wedding?” Yashim knew the form. Many times [. . .] he’d helped Preen prepare for the weddings, the circumcision celebrations, the birthdays for which people required the presence of the köçek dancers. And Preen, in return, perhaps without quite knowing it, had prepared him for his days: those new, flat days when agonies of lust and anger gnawed at him from the inside, and all the better days that were to come.

“Boys’ night,” she said, without looking around. “You’re lucky to find me.”

“Never better. There. How do I look?”

She turned her head this way and that, following her reflection in the mirror.

Preen put her fingers to her cheek and gently pushed the skin up. She let it drop, and Yasim saw her look at him in the mirror. Then she smiled brightly and turned to face him.

Yashim grinned and shook his head. “Looking for information.”

She raised a finger and wagged it at him. An enormous ring studded with cut glass winked in the light: one of the brash confections of the bazaar called “burst neighbors” for the envy they were supposed to inspire.

“Darling, you know I never betray a confidence. A girl has her secrets. What kind of information?”

“I need a quick line on the gossip.”

Gossip? Why on earth would you come to me?”

Preen wrinkled her nose and made a moue.

“The New Guards, from the Eskeshir Barracks.”

“I’m sorry, Yashim, but the thought revolts me. Those tight trousers! And so little color. To me they always look like a bunch of autumn crickets hopping to a funeral.”

Yashim smiled. “Actually, I want to know where they do hop. Not the men so much as the officers, Preen. Boys from very good families, I’m told.”

He left it hanging.

Preen raised her eyebrows and touched her hand to the back of her hair.

“I can hear the girls now. No promises, but I’ll see what I can do.”

Labels: Dancer and the Dance, Istanbul