At the Cathedral of St. Paul, Rainbow Sashes and a Circle of Love 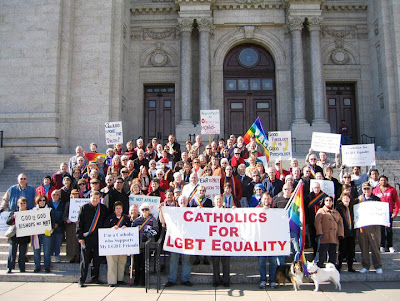 This past Sunday, October 31, approximately 150 people gathered at the Roman Catholic Cathedral of St Paul in loving opposition to the MN bishops’ campaign of intolerance and discrimination against the LGBT citizens of Minnesota.

Sunday's gathering at the cathedral was organized by a coalition of church reform and LGBT Catholic groups, including the Catholic Pastoral Committee on Sexual Minorities, Rainbow Sash Alliance, and Catholics for Marriage Equality MN. 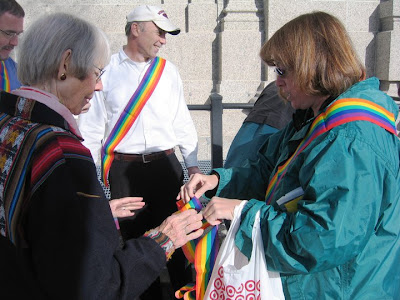 The organizers of Sunday's event at the cathedral offered fellow Catholics the opportunity to wear the Rainbow Sash to the noon Mass.

The Rainbow Sash proclaims that its wearer is (or knows and affirms someone who is) a GLBT person who embraces and celebrates their sexual orientation and identity as a sacred gift. Since 2005, the Archdiocese has adopted the policy of denying Communion to wearers of the Rainbow Sash.

Noted Brian McNeill (above) of Dignity Twin Cities and Rainbow Sash Alliance: “Our presence at the Cathedral is a celebration of support for marriage equity – not an angry expression of feelings towards the archbishop.” 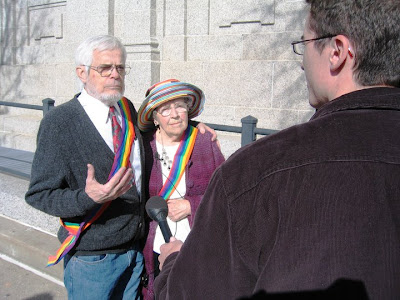 Above: Pat and Jenny Downey being interviewed outside the Cathedral of St. Paul -- October 31, 2010. They, like all who wore the Rainbow Sash, were denied Communion. 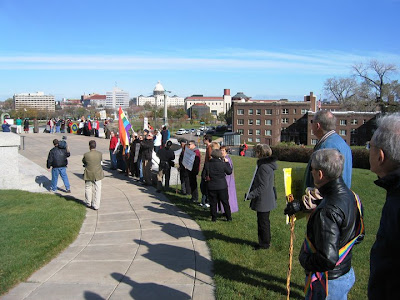 Above and below: Aware that many find the denying of Communion to Rainbow Sash wearers spiritually abusive, I came up with the idea of inviting those who did not wish to attend Mass to form a symbolic "circle of love and inclusion" around as much of the cathedral as was possible.

I must admit that in planning this aspect of Sunday's event I was inspired by Edwin Markham's poem which reads as follows:

The forming of this circle was a simple but powerful gesture that celebrated LGBT diversity and demonstrated the inclusiveness sadly lacking from the clerical leadership's perspective on LGBT people. Many in the circle wore Rainbow Sashes and/or held signs, banners, and symbols conveying messages of support for LGBT people and marriage equality. 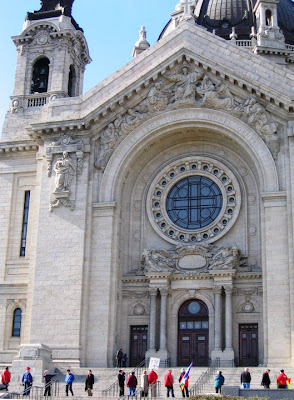 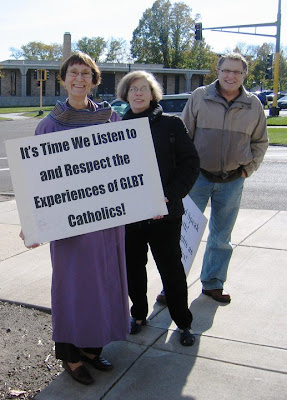 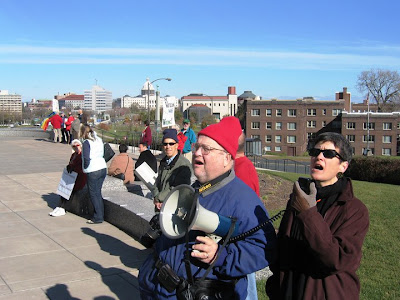 Above: David McCaffrey and Kathleen Olsen lead those gathered in singing "We Shall Overcome." 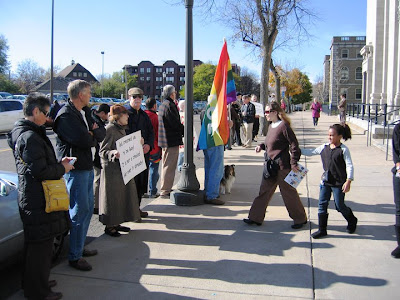 After the noon Mass at the cathedral, those inside wearing the Rainbow Sash joined those outside in the "circle of love." We concluded our time at the cathedral with a group photograph on the front steps (opening image). 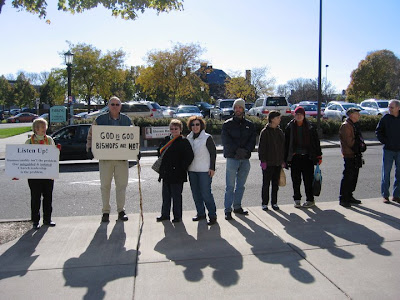 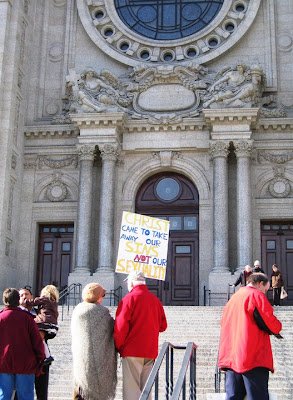 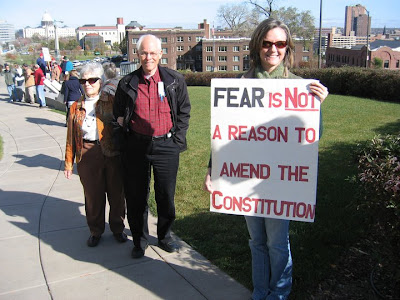 Above: This particular sign refers to Archbishop Nienstedt's urging of Catholics to support a constitutional amendment that would outlaw civil marriage in Minnesota. Only Republican gubernatorial candidate Tom Emmer supports such an amendment. On the eve of tomorrow's election, he seems unlikely to win. It looks as though Democratic candidate Mark Dayton will be elected governor and he has pledged to make marriage equality a reality in Minnesota.

I applaud your bravery in standing up for love, justice and equality. God bless you in your work. Thanks for sharing these beautiful pictures.