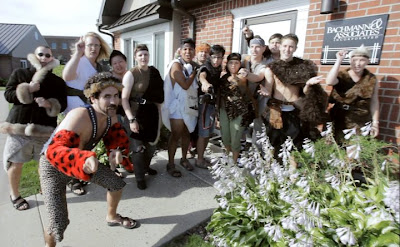 A friend of mine donned (faux) fur and was part of the recent non-violent direct action at the Minnesota "counseling" center of presidential candidate Michele Bachmann’s husband Marcus. And, yes, glitter was involved!

The action has received national attention. Following is The Washington Post's coverage.

While British protesters may still find pies their weapons of choice, glitter is fast becoming the American protest pick.

The latest victim? The counseling center of presidential candidate Michele Bachmann’s husband Marcus. The clinic, which receives federal and state funding, has come under fire for reportedly using “pray-away-the-gay” techniques.

Marcus Bachmann has come under fire for his strong views on homosexuality, with much of the focus on an interview in which he called anyone with homosexual tendencies “barbarian.”

To show their displeasure, gay and lesbian activists donned Viking-esque attire, called themselves a “gay, barbarian horde” and descended on the clinic to shower the lobby with glitter. 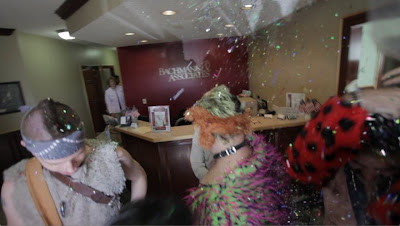