What We Are Hoping and Fighting For 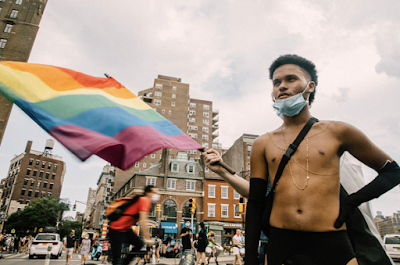 During the June 28 march, Kim photographed a number of participants, invited them to say why they were participating, and asked them about their hopes for the future. The resulting compilation of images and comments is well worth checking out in its entirety. Following is just a snippet of Kim's inspiring and hope-filled project. Enjoy!

I guess it's kind of cliché: I hope for equality. I hope that if I was to go on a train . . . I wouldn't face any harassment. I hope that there is a new system that doesn’t see the color of your skin but sees the content of your character. That's what Martin Luther King said. 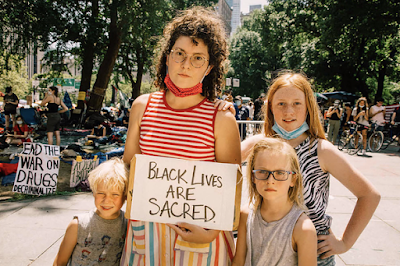 Says Katie Rose Summerfield (pictured with her children above):

I am an artist and a human in the world who cares about the humanity of all people. I think it’s essential that we show up for our brothers and sisters who have not been treated with any fairness, kindness, justice, or humanity for hundreds of years. And it’s time that we all be accomplices in the fight for abolition of white supremacy, racism, police brutality, and inequality across everything. 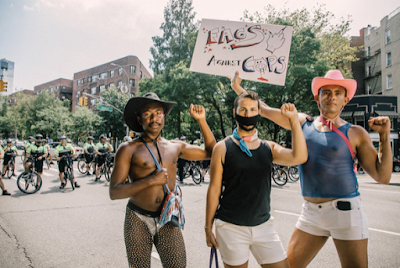 What brought me here today was trans rights, Black Lives Matter, and equality for all. . . . We are marching together to be with all my sisters and brothers and non-binary folks.

It’s beautiful that we are saying those [thing], but the reason that we are out here saying [them] is because we are continuously killed and there is no justice and we have to keep fighting and protesting. I’m hoping for the future that we no longer have to be out on the streets fighting against the state, and [the] state will side with us, and they will give us protection so that Black trans girls will have protection, Black people will have protection. We want to fight against people that are killing us.

I'm here because this is the real Pride. It started 51 years ago with Sylvia Rivera and Marsha P. Johnson – a riot against police brutality – and we are still criminalized and oppressed by the state and the police forces. So we need to continue organizing, running for office, voting, and getting engaged with our community to actually fight for change, including social justice and a [city] budget that really helps our community.

So we are honoring that life and that spirit of resistance. This is what this march is [about] – to bring that rioting spirit to actually fight for equal justice.

I really hope that we don’t have to fight against the state and discrimination, that we live in [a] society that honestly honors our lives, that we have full respect and we have full equality and justice. And that starts with the Equality Act, but we need so much more.

Legal marriage equality [happened], but that just got us the right to love. Now we need the right so we can walk in the streets without violence and being murdered, so the moment that no Black trans women are being killed in the streets, when people are not discriminated at work, when all the eradication of discrimination happens. That’s why we are truly here; that’s why we are marching.

We are not only celebrating that we could march because of the history of our movement, but because there is so much work to be done.

This is just the city’s Pride as Black Lives Matter rally, because the most important, impacted members of our LGBTQ community are the LGBTQ people of color: Black trans women, Latinx, undocumented queer immigrants. . . . It is a movement of solidarity.

Fighting for racial justice is to fight for queer rights; fighting for queer rights is fighting for racial justice. So we are not only standing in solidarity with Black Lives Matter, we also have Black queer lives, we also have immigrant Latinx queer lives and people of color. So this is a movement of solidarity, but we are both because our struggles are very interconnected. That’s why this Pride, this Queer March is so powerful, because it combines the intersectional lives and identities that we all live and they have been oppressed for so long and this is the moment for liberation.

And at the end, us browns and Black people, we are also protesting against the mainstream LGBTQ community which has for so long discriminated against us, discriminated against our most vulnerable members. And we are saying today: This is the Pride that we want; this is the Pride that we celebrate and nothing from now on in the future will be less. 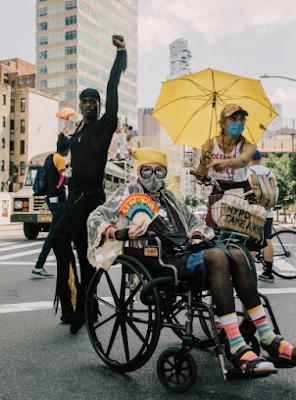 My hope for the future is the blue wave on election day, that everybody gets out there and votes; votes with their conscience and gets this horrible regime out of office. 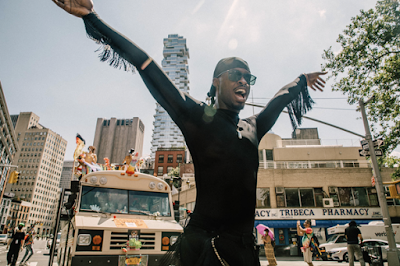 I am here today at the Queer Liberation March to liberate humanity, honestly. People of the LGBTQIA+ community are the backbone of how culture moves in this country. So I am here to support humanity in this outfit, have a good time, and support those who need support. 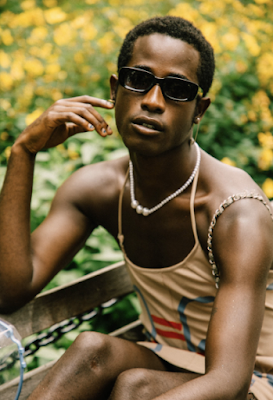 I am out here celebrating Black and brown trans lives and just witnessing a revolution.

It’s been a beautiful way to emerge back into the new world and to be in New York City is such a blessing. Because this is kind of where that kind of liberation began: going to Stonewall and just feeling that energy. I feel like the ancestors are really here. I’m taking it moment by moment; it’s really a lot to digest, but it’s everything we’ve been asking for, so. I think this is our time.

Oh, [I have] so many [hopes]. I would say for everyone, every being who enters this plane, this earth, this physical experience, to know that there is so much worthiness and rightness in their existence.

I would love for kids to be born knowing that there is a reason that they are here and that they have the power, that their evolution and their natural flow is going to look so specific for them, and that’s beautiful. And I want the people who maybe didn’t have that, who are kind of learning that about themselves now, I want them to heal and be graceful knowing that they always did and survived the best way they knew how.

To experience Alexey Kim's photo-essay, “This Is The Future Queer Liberation Protesters Are Fighting For,” in its entirety, click here.

For previous posts in the The Wild Reeds' 2020 Queer Appreciation series, see:
• Zaylore Stout on Pride 2020: “What Do We Have to Be Proud Of?”
• Francis DeBernardo on the U.S. Supreme Court Ruling on Title VII: “A Reason for All Catholics to Celebrate”
• Mia Birdsong on the “Queering of Friendship”
• The Distinguished Rhone Fraser: Cultural Critic, Bibliophile, and Dramatist
• “To Walk the World Without Masks”