No Stranger Am I 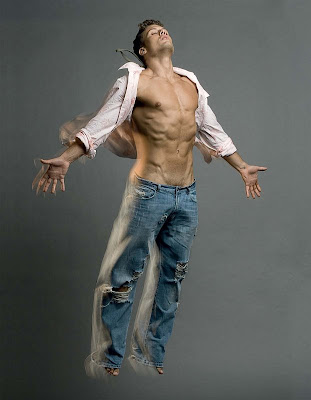 I consider May 2 as my “Coming Out Day.” I do so because it was on May 2, 1996, that I first presented and performed In the Footsteps of Springs, the visual/performance arts component of my Master of Arts in Theology thesis that explores the coming out process of gay men as a spiritual journey. This performance took place at the College of St. Catherine - St. Paul, before an audience of around 40 people, including my thesis adviser, the theologian Joan Timmerman, then a professor of theology at St. Kate’s. 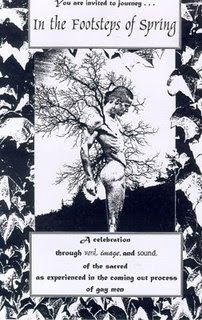 Of course, I had already begun to “come out” to others by then – including my family back in Australia (my “coming out” letter to my parents – and their response – can be read here). Nevertheless, my sharing of my coming out journey - and the theological underpinnings of this very human experience - through my presenting of In the Footsteps of Spring was definitely a significant (and very public) milestone in my coming out process. In a way, it was an intentional moment of reflection, thanksgiving, and celebration of God’s guiding and liberating presence in my life as a gay man.

So to mark the 13th anniversary of my coming out, I share today not only the wonderful opening image from photographer David Vance’s collection, “Heavenly Bodies” (one that for me, captures beautifully the meaning and experience of coming out), but also the following excerpt from In the Footsteps of Spring.

As you’ll see, this particular excerpt follows directly from this previous In the Footsteps of Spring post in which I defined and discussed the meaning of transcendence. Also, like previous excerpts that I’ve shared, this one uses the metaphor of “the light within” to talk about the gift of one’s homosexual orientation.

Transcendence overcomes fear.
It calls us to be ever-increasingly true
to who we are and to our story.

The most powerful way of doing this
is by naming ourselves and our stories to others
- by coming out, in other words.
This is the second passage*
of the coming out process.

Coming out to those around us
has the potential to nourish and sustain
not only oneself but the world.

There’s always the fear of rejection,
of scorn, even of violence.
Yet I’m learning to overcome such fear,
and to trust and believe instead
in the transforming power
of that sacred light within me.

Holding forth my light
invites others to do likewise.
With Jesus, and every other person who is open
to the presence and movement of the sacred
within and among us, we can say “I am”
- a powerful “here and now” statement
that grounds us in the fertile soil
of self-knowledge.

No longer am I a stranger
- either to myself or to others.
No longer are we strangers to one another.
And we discover in the sharing of our stories
a common bond - that being the source of all light,
the source of all of the diverse gifts of personhood.

And in our sharing
we bring forth a kingdom of light
- one that dispels the darkness
of fear and indifference,
and reveals to us the truth
that, indeed, we are all one.

At this point in the performance of In the Footsteps of Spring, Norma Tanega’s song “No Stranger Am I” (as performed by Dusty Springfield**) is played, during which audience members’ unlit candles are lit using the flame from my candle - one that has been lit from the beginning of the performance. By the time the song has finished and everyone’s candle has been lit, the darkness of the room has been dispelled, symbolizing the dispelling of “fear and indifference” within our hearts and our world.

I feel you ’er I sing
No unending time alone

* The first passage involves coming out to oneself. I explore this passage here.

“No Stranger Am I” was originally featured on Norma Tanega’s 1966 album “Walkin’ My Cat Named Dog”; Dusty recorded it a year later during sessions for [her album] “Where Am I Going?” Tanega [Springfield’s lover at that time] was actually present at the session, on guitar. She recalls the MD insisting that there was a mistake in the tempo at one point in the song: 5/4 instead of 4/4. It took Dusty to come out of the box and point out that it was written that way for the session to continue. The song is highly spiritual, a celebration of new love, and was obviously very personal to Dusty at that time. Tanega’s warm and imaginative lyrics are sun-kissed by the sensitive guitar and woodwind arrangement.

To hear Dusty Springfield’s recording of “No Stranger Am I,” click here.


Previous installments of In the Footsteps of Spring:
Introduction
The Light Within
Shards of Summer
Intimate Soliloquies
Coming Out

See also the previous Wild Reed posts:
Coming Out: An Act of Holiness
The Triumph of Love - An Easter Reflection
The Many Manifestations of God’s Loving Embrace
Trusting God’s Generous Invitation

Labels: Coming Out, Dusty Springfield, In the Footsteps of Spring

Happy coming out day, Michael and blessings on you.