Musings on the Possibility of “FinnPoe” 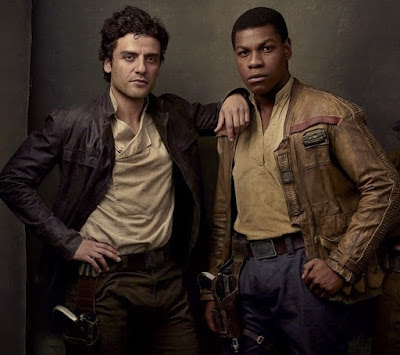 Above: Oscar Isacc as Poe Dameron and John Boyega as Finn in the 2015 film, Star Wars: The Force Awakens.

Last December, Vanity Fair’s Peyton Thomas mused on what it would take to get a queer character in Star Wars. 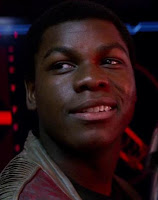 Thomas notes that queer fans of the franchise have lobbied since 2015 for a romantic relationship between the Star Wars characters Poe and Finn — a move that John Boyega (right) who plays Finn would support, as he indicated in an October 2017 interview. “[Poe] is always looking at [Finn] with love in his eyes, and I guess that the fans saw it,” the actor said. “And then they realized that either [Poe] needs to chill or come out.'”

According to writer Bill Bradley, some queer fans of Stars Wars have “lovingly dubbed” the pair “FinnPoe.”

Bradley’s piece last month at The Huffington Post quotes actor Oscar Isacc, who plays Poe, as saying that when it comes to depicting Poe’s relationships, he is “all about keeping it as fluid as possible.” 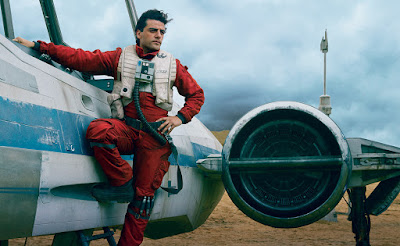 Above: Oscar Isacc as Poe Dameron in the 2015 film, Star Wars: The Force Awakens.

Following is Bradley’s piece in its entirety. It’s accompanied by various fan-art depictions of Poe and Finn that I found online. Enjoy!

When it comes to Poe Dameron’s love life, there’s a galaxy of possibilities, says Oscar Isaac.

The actor, who’s currently starring in the Nazi thriller Operation Finale, recently spoke with HuffPost about his highly venerated Star Wars character and the fan community’s penchant for speculating about his potential love interests.

As io9 uncovered by way of Pablo Hidalgo’s Star Wars: The Last Jedi ― The Visual Dictionary, the official guidebook to the film, Poe’s character wears a ring given to him by his mother, which he’s “waiting to share . . . someday with the right partner.” 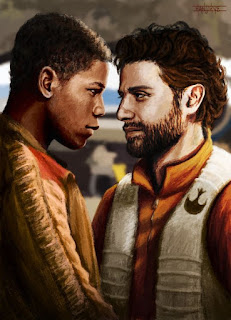 Fans jumped on the gender-neutral term “partner,” with many using it to ’ship a romance between Poe and John Boyega’s character, Finn ― a pairing lovingly dubbed FinnPoe.

We asked Isaac, who’s been supportive of Poe’s possible LGBTQ identity, about his character’s ring and the use of the term “partner” in the guidebook.

His coy response: “I’m all about keeping it as fluid as possible.”

“There are a lot of interesting people in the galaxy, it’d be a shame to cut off 50 percent,” he said. “I think Poe’s open to any kind of adventure.” 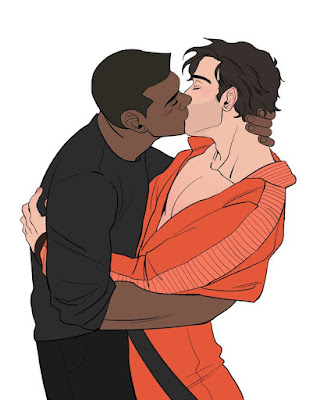 So it seems like Poe might be taking the Lando Calrissian approach to love. [Note: This “approach,” i.e., pansexuality, has been described by writer Megan Farokhmanesh as “bullshit” – “a piss-poor shot at representation that still manages to reinforce hetero relationships as default.” It also feeds into, says Farokhmanesh, “the long, damaging tradition of conflating pansexuality with promiscuity.”]

Still, as much as people want Poe’s “adventures” to include Finn, it doesn’t seem likely.

“I don’t know if that’s going to happen,” Boyega told us earlier this year when we asked about the possibility of FinnPoe. He added that Finn’s complicated feelings for Rey (Daisy Ridley) – as well as his kiss with Rose Tico (Kelly Marie Tran) – probably put a future with Poe to rest. [Note: Tran herself, however, has admitted that she’d rather see Poe end up with Finn. Here, here!]

“I mean, just so many [love interests]. They need to all leave me alone, man. I’m trying to just be handsome and sexy on my own, and they’re interrupting,” [Boyega] joked.

In contrast to Finn’s plethora of romantic options in Star Wars: The Last Jedi, Poe’s love life hasn’t really been explored. (Unless you’re willing to look very deeply into that time he gave his jacket to Finn in Force Awakens, or the very casual lip bite captured in GIFs shared across the internet.)

But it could be addressed in the upcoming Star Wars IX.

Maybe there is a “partner” out there for Poe somewhere, even if it’s not Finn. But if so, could someone please tell that to his lip bite? 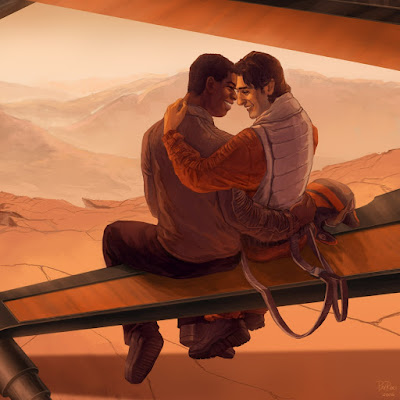 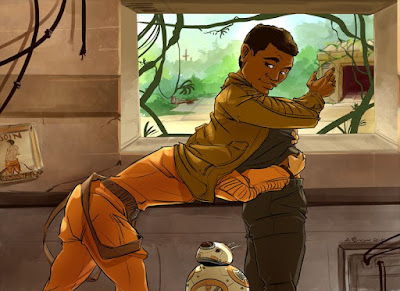 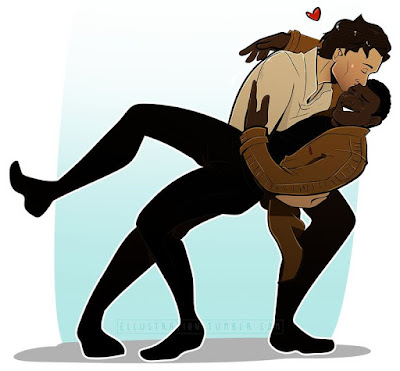 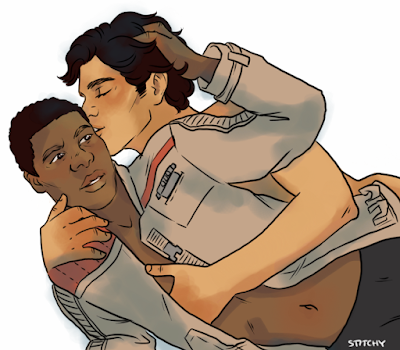 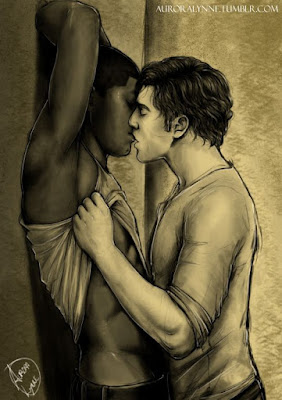 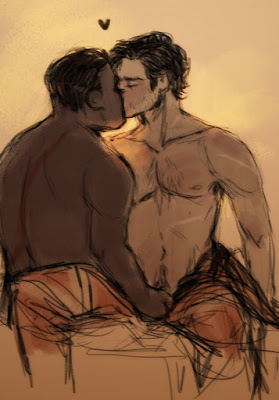 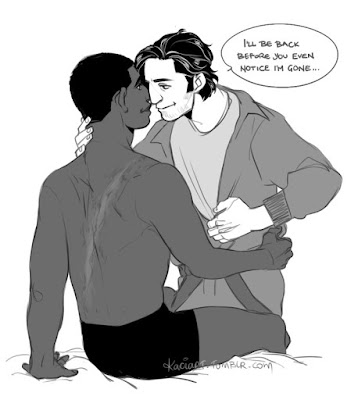 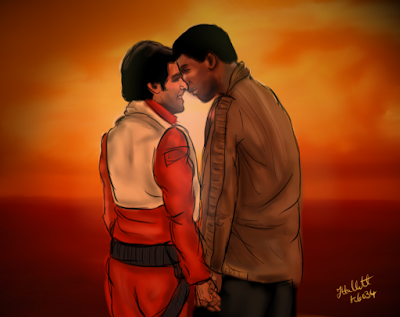 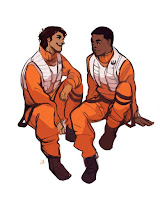 Related Off-site Links:
What Will It Take to Get a Gay Character in Star Wars? – Peyton Thomas (Vanity Fair, December 12, 2017).
What a Pansexual Lando Calrissian Reveals About the Evolution of Star Wars – Aja Romano (Vox, May 29, 2018).
Lando Calrissian’s Newfound “Pansexuality” Is Bullshit – Megan Farokhmanesh (The Verge, May 17, 2018).
Oscar Isaac on the Possibility of Poe Being an LGBTQ Character in Star Wars – Carolina Moreno (The Huffington Post, December 6, 2017).
Star Wars’ Oscar Isaac Has “Fully Endorsed” Finn and Poe Getting Together – Josh Jackman (Pink News, February 22, 2018).

See also the previous Wild Reed posts:
• Resisting the Hand of the Empire
• Wolfie
• One Divine Hammer
• What the Vatican Can Learn from the X-Men
• The New Superman: Not Necessarily Gay, But Definitely Queer
• Adam Sandel on the Queer Appeal of Harry Potter