Rumi and Shams: A Love of Another Kind 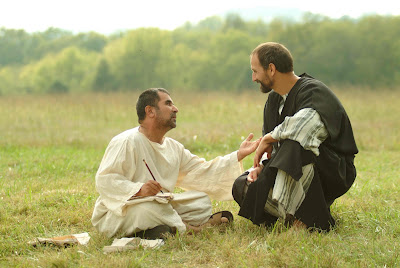 Today is the anniversary of the death of Sufi poet and mystic Jelaluddin Rumi (September 30, 1207 – December 17, 1273). As Fahad Faruqui notes, this anniversary is known as "Wedding Night" or Seb-i Arus in Turkish.

"Like every year," Faruqui writes, "dervishes and devoted fans across the world, especially in his final resting place Konya, Turkey, whirl like a spinning wheel to pay tribute to their beloved Mevlana, meaning Our Master. Others read his poetry in gatherings or in solitude to reflect on the intended message." 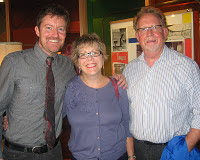 To mark "Wedding Night" here at The Wild Reed, I share an excerpt from The Illuminated Rumi by Coleman Barks. I was introduced to this beautiful book when it was presented to me as a gift from my friends Joan and George (pictured at right with me at the September 29, 2011 premiere of Catholics for Marriage Equality). They gifted it to me on the occasion of my graduation from United Theological Seminary's Master of Arts in Theology and the Arts program in May 2003.

This particular excerpt focuses on the remarkable relationship of Jelaluddin Rumi and Shams of Tabriz – a relationship that, according to Coleman, "forever altered the course of Rumi's life and influenced the mystical evolution of the planet." 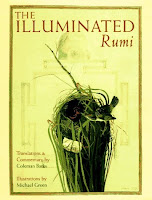 The meeting of Rumi and Shams was a grand event in the mystical evolution of the planet. With their friendship, categories of teacher and student, lover and beloved, master and disciple, dissolved.

Jelaluddin Rumi was born in the remote town of Balkh, in what is now Afghanistan. He lived most of his life in Konya, Turkey, which in the 13th century was a meeting point for many cultures at the Western edge of the Silk Road, a place where Muslim, Christian, Hindu, and even Buddhist travelers mingled.

Rumi, at the age of thirty-seven, had become an accomplished doctor of theology, the center of his own divinity school. He was a venusian lover of the beautiful and the good, a scholar, and artist.

Shams was a wandering dervish monk, rough-hewn and sinewy. A street bodhisattva who mingled with laborers and camel drivers, he had no school. People spontaneously gathered around him, though he was given to slipping out the side doors and leaving town when it happened. He did not want followers or fame; he only wanted to find one person vast enough in spirit to his companion.

He met Rumi in Konya. 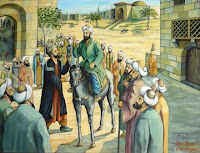 As Rumi was riding a donkey through the marketplace, surrounded by a knot of disciples, a stranger with piercing eyes stepped from a doorway and seized his bridle. The stranger challenged him:

“Who is greater, Muhammad or Bestami?”

Bestami was a legendary Sufi master given to ecstatic merging with God, then crying out with mystical candor that he and the Godhead were one! Muhammad was the founder of their tradition, the anointed one, but his greatness resided in his stature as messenger of God. So who was greater?

“But Bestami said, ‘I am the Glory!’ Muhammad said, ‘I cannot praise you enough!’”

As Rumi was about to reply, he realized that this was no seminary debate about the mysteries. In a dusty marketplace in south central Anatolia, he had come face to face with the Mystery.

A doorway to eternity flickered open . . . And in one pure outrageous act of faith, Rumi dove through. In an instant of mystical annihilation, fire met fire, ocean ocean, and Rumi fell into pure being. Later, he would say, “What I once thought of as God I met today as a human being.”

To the outside world, it is only recorded that, at Shams’ question, Rumi “tumbled from his saddle to the ground, unconscious.”

When Rumi revived, lying on the ground, he answered, “Bestami took one swallow of knowledge and thought that that was all, but for Muhammad the majesty was continually unfolding.”

Shams felt the depth of the answer. This was the one he had sought.

The two began a series of months-long retreats into solitude where they entered into a deep communion of words and silences called sohbet. Who can say what transpired there? We can only guess that Rumi endured the refining fires of a deep spiritual purification.

But some of Rumi’s students saw their beloved teacher being spirited away by a madman, and their intrigues forced Shams to leave Konya. After a time Rumi sent his son, Sultan Veled, to bring Shams back. He found him in Damascus, playing cards in a tavern with a young man from the West, the wastrel later to become Francis of Assisi. The young man was cheating. When the entourage treated Shams like an emperor of the spirit, Francis confessed and attempted to give Shams the money back.

Shams was forced into exile several times, but he always returned at Rumi’s request. Finally on December 5, 1247, fanatics in the community took Shams’ life. The body disappeared. Rumi wandered for months – desolate in disbelief that his companion was really gone. One day in Damascus, he realized there was no longer a need to search. Shams was with him, in him. Rumi embodied the Friendship. With this final illumination, he began singing the spontaneous poetry of such beauty and perfection that is now loved and revered across the world as revelation.

Who was Shams? The name, which actually translates as the sun, becomes a charged hieroglyph constantly reappearing in Rumi’s poetry. . . . When Rumi died, he was mourned by Christians and Jews, as well as Muslims and Buddhists. While he did his spiritual spadework within the patterns of Islamic Sufism, his whole life was a witness to the boundless universality of the Heart. . . . His vision was a whole-world work and the poetry was part of the soul-unfolding done in a learning community. Sufis are loved the world over for reminding us that the glory is our inner reality, the outer being a kind of language that explains THAT. Love is the religion. The universe is the book.

All of this poetry can be heard as Rumi’s continuing conversation with Shams of Tabriz, an exploration of what it is to be together in God. But the stories that speak of this are at a distance from the center. The real story comes from a love-source that cannot be understood with intellect, but known only as a person is known. It is not meant to be explicated, but felt as music, as presence. These illuminations are a deliberate attempt to slow our pace down, to find a sacred space where this can happen. Listen with what Rumi called “The ear in the center of the chest.” “Hear,” he begs us. “Hear what’s behind what I say . . .”

See also the previous Wild Reed posts:
• The Sufi Way
• A Dance of Divine Love
• As the Last Walls Dissolve . . . Everything is Possible
• The Winged Heart
• Clarity, Hope and Courage
• It Happens All the Time in Heaven
• Bismillah
• A Living Twenty-First Century Tradition
• In the Garden of Spirituality – Doris Lessing

How is it possible that Frances of Assisi, already converted in 1205 when Rumi was 2 yrs old, was cheating whilel playing cards with Shams?

My understanding is that Shams was quite a few years older than Rumi.