I first saw the film back in 2006, on a flight from the U.S. to Australia. I was quite mesmerized by its beauty and moved by its story. Awareness and gratitude are two important themes running through The New World, and so with today being Thanksgiving here in the U.S., I thought I'd share some images and words from the film, along with what others have said about it.

Allan Fish, for instance, notes the following in his review of the film for Wonders in the Dark:

All the images are beautiful, as one might expect, the juxtaposition thereof majestic to the point of divinity, and the sound texture enough to make one feel at one with nature. It’s an odyssey into the sensory delights of pure philosophical cinema, subliminal cinema, and as such it is one of the visionary works of the last decade. What Milton called “the sum of earthly bliss” is here for all to see and at its most fluid, if you have eyes to see it.

In his review of The New World for Nonsite.org, an online "journal of scholarship in the humanities," Richard Neer writes:

The New World is not just a narrative of exploration and discovery, but also one of conversion. During its course both Smith and Pocahontas undergo ceremonies of rebirth: the former after Powhatan spares his life, the latter in her baptism under the name Rebecca. Neither ceremony has much effect; Smith reverts to his former ways, and “Rebecca” continues to pray to a Mother Spirit even after she becomes a Protestant. Matching POV shots of a Puritan fanatic and an Indian priestess – each tightly framed, facing the camera with palms forward, threatening – rule out any sentimentalization of either Christian or Native American spirituality. What might seem to be needed is some sort of inner rebirth, a “true” conversion, and yet the whole film has militated against any simple myth of the inner. The language of spirituality seems inapt – yet more hawking of ineffability – yet . . . the final minutes of the film do narrate a conversion and, moreover, they do so in order to effect a similar conversion in viewers.

. . . The whole film is preparation for this ending, in which the intelligibility of a New World simply ceases to be a question, because a myth of newness – perhaps the American myth – has been renounced. No photograph, no film, can ever lay claim to radical newness thus conceived, anymore than mere philosophy can render intelligible the absolutely new. Malick’s film stages various hungers for that sort of newness, everyday yearnings to know the ineffable – political, erotic, operatic, cinematic, philosophical – that is taken to lie on the far side of things. In staging them, the film shows their attraction and their danger, for both historical actors (Smith, Pocahontas, Rolfe) and contemporary ones (“us,” or “we”).

Come, Spirit, help us sing
the story of our land.
You are our mother;
we your field of corn.
We rise from out of the soul of you.

– Pocahontas
(as played by Q'orianka Kilcher in The New World)

How many lands behind me?
How many seas?
What blows and dangers?
Fortune ever my friend.
Who are you, whom I so faintly hear?
Who urges me ever on?
What voice is this that speaks within me,
guides me towards the best?
We shall make a new beginning.
Here the blessings of the earth
are bestowed upon all;
none need grow poor.
Here there is good ground for all.
. . . We shall build a true commonwealth.
Men shall not make each other their spoil.

Love.
Shall we deny it when it visits us?
Shall we not take what we are given?
There is only this.
All else is unreal.

I close with an excerpt from Matthew Wilder's insightful City Pages review of The New World, originally published January 11, 2006. 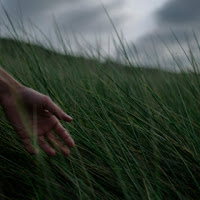 . . . Malick's script follows the outward-flying, all-embracing shape of Walt Whitman's Leaves of Grass, sometimes very literally; Malick is the first artist in movies who has managed to translate Whitman's ecstasy – the bliss of connectedness to all creatures and things – into sound, music, and images. He returns movies to the poetic essence of silent cinema – and essence is, in fact, the theme of this work. In 19th-century fashion, Malick is an essentialist, a believer that Nature and Woman and Country have cores that can be identified and photographed. But that essence can't be too easily quantified, because a thing's essence is, for Malick, its soul. The transmission of spirit through cinema: Haven't thought about that much lately, have you? Malick seeks to return movies to their essence by traveling backward in time to a period before their invention.

The movie is structured around three ecstatic montages: the arrival of the tall ships in the New World, the consummation of the love between John Smith (Colin Farrell) and the girl usually known as Pocahontas (Q'Orianka Kilcher), and a third that I can't divulge to those who haven't seen the film. Each section uses a passage from Wagner's "Das Rheingold" that focuses on a single rising and falling arpeggio that musically mimes Malick's trademark image, the rippling of wind through tall fields of grass; and in each, the natural world cascades over us, imminent and omnipresent, its embrace at once sexual, intoxicating, menacing, and ennobling. It is a sign of The New World's towering ambition that, in these three sequences, those cascading images of nature are meant to encompass the blending of many kinds of oppositions: the "technological" and the "primitive," male and female, innocence and experience.

Are Malick's images of a fecund virgin-child-mother and her tribe "naive"? The PC police will find their arrest warrants rescinded by the totalizing power of Malick's vision. In the penultimate sequence, the heroine is brought to the British court and has the red carpet rolled out for her: His Majesty the King delights her with all the creatures of his menagerie and with the animal skins and plumage worn by his baroquely attired courtiers. It is as if the genes of the dowdy British and the florid American aborigines met once again in the future – peaceably recombining to re-create the image of the garden in heaven.

No contemporary filmmaker, not even Robert Bresson (who died nursing a dream of a film based on the book of Genesis), has removed everyday psychology from movie acting as Malick has here. By creating often wordless scenes in which his actors are focused on arduous physical tasks, Malick moves us back to a place discovered by the pilgrims of Christian portraiture: the revelation of the soul as the unselfconscious subject. In the magical alchemy between editing, music, and the guileless faces of his performers, Malick finds an inner light.

– Matthew Wilder
Excerpted from "The End of the Innocence"
City Pages
January 11, 2006 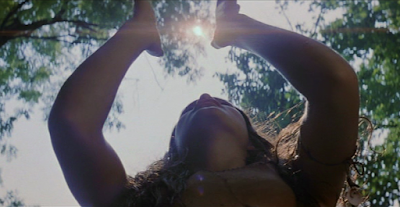 Love this film; thanks for reminding me of it! And Happy Thanksgiving!

Terrence Malick may be the most misunderstood genius of modern cinema. But then, how many directors realize that a film can be a poem?
Thank you for your beautifully written appreciation.