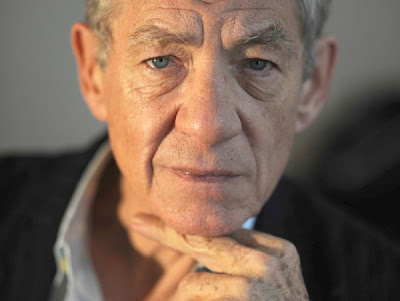 My friend Rick recently alerted me to a great interview in the Los Angeles Times with British actor Ian McKellen, currently in the U.S. promoting his latest film, the TV mini-series The Prisoner. Following are excerpts from this interview that I found most interesting. Perhaps you will too.


Wearing glasses that magnified his famously blue eyes, McKellen leaned back against a couch, yawning as he fiddled with an empty Tic Tac box. When the topics turned personal, however – such as Hollywood’s attitude toward gays and his disillusionment with religion – he appeared to take his own admonition about candor to heart.

“I increasingly see organized religion as actually my enemy. They treat me as their enemy,” said the British actor, who came out 20 years ago. “Not all Christians, of course. Not all Jews, not all Muslims. But the leaders. . . . Why should I take the judgment of a declared celibate about my sexual needs? He’s basing his judgment on laws that would fit life in the Bronze Age. So if I’m lost to God, organized religion is to blame.”

. . . If all goes right, next year [McKellen] will begin shooting two movies based on The Hobbit, the long-awaited prequels to The Lord of the Rings trilogy. McKellen confirmed that he’s in talks to reprise the role of Gandalf the wizard, a part he’s eager to return to, under certain conditions.

“I don’t want it to take five years, for example,” he said. (For the Rings trilogy, he spent a year shooting in New Zealand.)

After a storied stage career, McKellen is at ease with the fact that his name is forever wedded to the J.R.R. Tolkien character.

“I should be so lucky to be in a film that’s been seen by more people than any other film,” he said. “Of course, it’s likely that more people would know me for that than for playing Macbeth. I might be worried if I didn’t think Lord of the Rings was a wonderful film and Gandalf wasn’t one that I was proud of.”

In fact, “when I’ve been asked what should be on my gravestone,” he noted, “I’ve said: ‘Here lies Gandalf. He came out.’ Two big achievements.”

McKellen revealed his sexuality at age 49 on a British radio show during a debate about anti-gay legislation. He says it’s the most important thing he’s ever done, and when he’s not acting, he spends much of his time lobbying for gay rights. He visits schools in England as part of a program to prevent gay bullying. When he finds a Bible in a hotel room, he rips out the passage in Leviticus that condemns homosexuality.

In his view, Hollywood still hasn’t come that far in its attitude toward gays.

“The conventional wisdom is that if you are gay, you cannot play the romantic straight lead in a movie,” he said. “They’d rather have ‘don't ask, don’t tell.’ The proposition from Mephistopheles as you sign the agreement that you will become a Hollywood star is that you will lie about yourself. That’s selling your soul. This business may involve disguise, but it’s about telling the truth. And I don’t think a closeted actor in this day and age can act as well as an actor who is out.”

Despite his strong sentiments, McKellen insists that he’s “a very shy person.”

Coming out gave him more confidence, but “it is not easy being something that society for generations has taught everybody is beyond the pale.” To this day, he sometimes ducks questions from cabbies about whether he is married, exhausted by the notion of explaining himself to a stranger.

“There are still times in my life where I pull back from being totally honest,” he said quietly, “and I can’t imagine a single straight person who would understand that.”


To read Matea Gold’s interview with Ian McKellen in its entirety, click here.

For more of McKellen thoughts about coming out, see the previous Wild Reed post, My Advent Prayer for the Church.