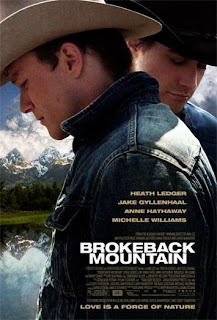 In February, Frank D. Myers contacted me via e-mail and, in sharing his thoughts about my writings on The Wild Reed, generously said: “You’ve ordered my thoughts, stretched my mind, exercised my spirit, and given me many new things to think about. . . . You are a wise and eloquent man . . . Heck, for many I’ll bet you’ve been and continue to be answered prayer.”

It was while looking for “intelligent commentary” about the late Heath Ledger that Frank found my Wild Reed post on the young actor who died in January. In his e-mail, Frank shared his thoughts about Ledger and the film for which he is perhaps most well known, Brokeback Mountain (2005). Described as an “epic American love story,” Brokeback Mountain features Ledger as Wyoming ranch hand Ennis Del Mar, who, from 1963 to the early 1980s, has a clandestine relationship with an aspiring rodeo rider named Jack Twist (played by Jake Gyllenhaal).

To my mind, Ledger’s performance was the transcendent aspect of “Brokeback Mountain,” and awe keeps me working to figure out how and why and with what assistance he did it. Another expression of grace, I sometimes think.

I’m just old enough to be your father – and that means my epiphany summer spent in and around Wyoming’s Big Horns, mostly on my great-uncle’s ranch and his allotments above it, with my “Jack,” paralleled fiction in time and place. So the film knocked me flat at first and when I’d gotten up the first time, it knocked me down again.

Frank shared with me how he wrote a piece for the Globe Gazette, entitled, “Brokeback Fever,” in which he told his story, “framing some of the best and happiest days” of his life with commentary on Brokeback Mountain.

He notes that many who read his commentary saw it as a “coming out” piece. “And that’s fine,” he says. “But if there is such a thing as an ‘official’ coming out,” he continues, then “that happened a good many years ago now, not long after that guy I called ‘my Jack’ walked out into a field in Golden, Colorado, stuck the barrel of a pistol in his mouth and pulled the trigger – not because he was gay, conflicted or guilt-ridden, but because he was dying of AIDS.”

In November 2006, Frank made a presentation to the Mason City, Iowa, P-FLAG chapter, sharing with his audience “a little of what I’ve learned while taking a long hard look at a short story and a movie, both called Brokeback Mountain; trying to find lessons in fiction that we might apply to our non-fiction lives.”

Recently, Frank shared with me the text of this presentation, entitled “Brokeback Fever, Too,” and gave me permission to reprint excerpts from it on The Wild Reed. I’m honored to do so in a series of posts, starting with this first installment today.

I want to get one thing straight at the beginning, so that there will be no misunderstanding. I believe as firmly as I believe anything in this life that sexual orientation is original equipment, that those of us who are gay, lesbian, bisexual, transgender, or straight are as we were created. And that the Creator does bot make mistakes. This means there is a purpose for each of us and that purpose cannot be separated from who we are.

The good Lord is not, however, a babysitter. So I also believe that it is up to each of us, with grace and a little help from our friends and families, to sort out the implications of who we are and to live everything – including what sometimes appear to be contradictions – bravely; to do what has to be done. That’s a fairly simple concept, but it took a good while for me, as it does for most of us, to grasp.

My friend and colleague, Deb Nicklay, enjoys bringing me back to earth sometimes, and she did just that that at the office one evening several months ago when I was going on and on about Brokeback Mountain and what it meant to those of us who are queer.

She was right, of course, and isn’t that remarkable in itself? Who would have thought that in my lifetime a big-budget Hollywood film produced by highly-acclaimed writers and starring mainstream actors would do its best to present our lives objectively, without stereotypes, smirks and smears; and that it would be shown in public theaters almost everywhere, including Mason City, Iowa?

And that an eminently sensible heterosexual reporter, United Methodist lay speaker, wife and mother from Osage would go see the movie, like it, and conclude that it was, more than anything else, a simple love story.

That all of this was possible may be the most obvious lesson from Brokeback: Times really have changed and the scales are tipping.

But if you are queer, or love someone who is, it doesn’t stop there. That film, to one degree or another, is our story. That makes it to us considerably more than a simple love story.

I was struck first of all by the scenery: Canada pretending to be rural Wyoming, a state whose landscape I used to know fairly well and still love. And then I was struck by who the principal characters were – blue collar boys, farm boys, rural boys – just like me – and poor. That is not the gay stereotype.

Old queers like me know that gay men have been playing with that cowboy/farm-boy/blue-collar image forever – sometime nice, sometimes naughty. But I’m not sure we’ve taken it seriously. Somehow we fell into a trap many years ago of believing with a majority of our straight brethren that every queer who could, should and had moved to San Francisco, Minneapolis, Des Moines, or another city; and that only a few shadowy unfortunates remained out here in the boondocks. That’s misled a lot of folks – our neighbors who assume we’re not here; ourselves, if we somehow feel inadequate because we still are here. 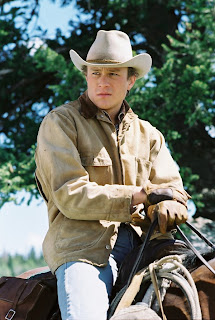 There are queer folks on farms or ranches, in small towns and working-class neighborhoods of larger towns everywhere in this country. And for the most part, I think we’re here because we want to be.

Take me, for example. I consider Mason City dangerously large and really don’t like living inside it; never have – although it’s much more convenient to walk a block to work than drive 80 miles round-trip every day, as I did for a good many years. I’m far more comfortable three hours south in Chariton; which I can walk out of in five minutes or less, if I get the urge, and be in the country. Add to that the fact I think southern Iowa is heaven on earth and you’ll begin to understand why I’d rather be there.

But wherever we are in this great country, we should never feel apologetic or inadequate because we are gay and rural. We should celebrate it.