Beatrice Marovich on Divinity and Animality in Life of Pi

Earlier this evening I saw Ang Lee's Life of Pi (in 3D!). It's a beautiful and thought-provoking film, and one that does justice to Yann Martel's powerful 2001 novel upon which it is based.

Beatrice Marovich has written an incredibly insightful and equally thought-provoking review of the film over at Religion Dispatches. Here's just part of what she says . . .

The movie makes me believe in the power of living, lively, lovely animal bodies. It makes me believe that the world without them would be less extraordinary. And it seems to feed the idea that there is something about these creatures – about animality as such – that can save us humans from ourselves, from imminent ecological catastrophe.

That is to say, these fantastic animals appear to offer some sort of salvation. It’s as though, if we’re able to really believe in animals, another sort of world might be possible. And animality, animal bodies, are the gateways to this alternate universe.

This proposition may sound a bit delusional. Perhaps it also sounds a bit dangerous (as delusions often are). But it wouldn’t have sounded odd to the notorious scholar of myth and religion, Mircea Eliade. In his 1957 book Myths, Dreams, and Mysteries, he argued that there is something about the human connection with non-human animals that reveals a kind of nostalgia for Eden before the fall, a paradise.

Eliade believed that human individuals who were able to “befriend” animals, to speak what he called the “language of the animals,” might be capable of accessing an almost superhuman spiritual life. They were taking one step closer towards renewing the fabled harmony between humans and animals that is central to many paradise myths. He believed that anthropological data on shamans substantiated his claims. But he also believed that we see a clear example of this in the Christian figure of Saint Francis, who famously preached his gospels to the birds and the fish and has been formally declared the “patron saint of ecology.”

The philosopher Jacques Derrida also argued, in some of his last lectures, that in a culture where the human being is understood to be the figure of sovereign authority – the figure that holds the reins of political power – divinity and animality bleed into one another in a kind of excluded space. The more powerful humanity becomes, in other words, the less power is held by those elements that humanity excludes, such as divinity or animality. The result, he suggests, is that we’re left with a kind of “divinanimal” exclusion.

Environmental thinkers have long charged that “Western” culture, particularly contemporary North American culture, and particularly Christianity, is anthropocentric. Everything revolves around the human being, like planets around the sun. Together, I think, Eliade’s and Derrida’s ideas bring divinity and animality close together: they become intimate in ways that exclude humans, or that beckon to them. 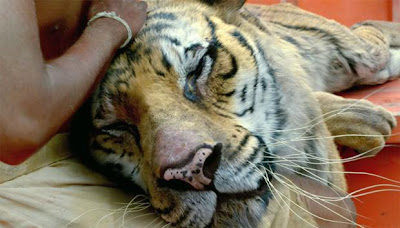 Are we haunted by the figures of divinity and animality that have been pushed to the fringes of our cultural and political existence? From those fringes, where animals and the divine exist, do they begin to blend strangely together? Do the gods begin to appear in the form of animals? And do animals seem to leave their footprints along the paths toward salvations? Do they, together, whisper to us their promises of another world? Of something greater than human being? . . .

To read Beatrice Marovich’s review in its entirety, click here.

See also the previous Wild Reed posts:
• The Sannyasi and the Tiger
• Francis and the Wolf
• Something to Think About – May 26, 2012
• Photo(s) of the Day