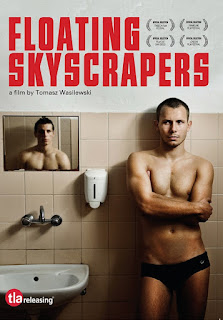 Tomasz Wasilewski's film Floating Skyscrapers is as topical today as it was in 2013, the year it was released. This is due in large part to the ongoing actions of the notoriously anti-LGBTQI government of the Polish filmmaker's homeland.

Yesterday, Human Rights Watch published a helpful (though troubling) statement on recent events in Poland. Following is an excerpt.

In recent weeks, [Polish] police have arrested LGBT rights activists for peaceful protest actions on the basis of an overly broad blasphemy law, violating freedom of expression and signaling the further deterioration of the rule of law in Poland.

On August 7, hundreds of demonstrators gathered outside the Warsaw offices of the Campaign Against Homophobia, an LGBT rights group, to protest an order to arrest an activist named Margo accused of causing damage in June to a truck promoting false anti-LGBT propaganda. After about an hour of the demonstration, which was livestreamed on Facebook, police who had arrived to execute the order departed without Margo.

. . . In recent years, Poland has been engulfed by anti-LGBT vitriol. The rhetoric has been largely fueled by the ruling Law and Justice Party, which has a history of scapegoating LGBT people and sexual and reproductive health activists for political ends, under the rubric of attacks on “gender ideology.” Senior party members have historically misrepresented efforts to advance gender equality and end discrimination as attacks on “traditional” family values, and used such arguments to undermine women’s and LGBT rights groups.

Andrzej Duda, a Law and Justice politician, was re-elected president in late June following a campaign that actively deployed anti-LGBT rhetoric as an election strategy, including calling “LGBT ideology” more dangerous than communism. Currently the Justice Ministry is funding work aimed at “counteracting crimes related to the violation of freedom of conscience committed under the influence of LGBT ideology.”

In July, the European Commission announced that it would withhold development funding for six Polish municipalities in reaction to their insistence of retaining the label of an “LGBT-Free Zone.” Authorities in one third of Poland’s cities have identified their localities as “LGBT Ideology Free Zones” although courts attempted in 2019 to curtail the pernicious anti-rights campaign. On August 6, an administrative court in Lublin annulled the anti-LGBT resolution of the Serniki Commune. 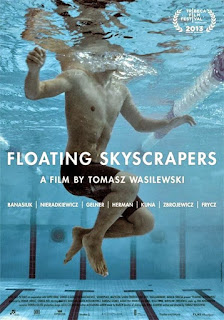 Tomasz Wasilewski's Floating Skyscrapers is set in the Polish capitol of Warsaw and follows the story of Kuba (Mateusz Banasiuk), an aspiring professional swimmer who falls in love with another man to the disapproval of his mother and to the surprise of his girlfriend, who tries to hold on to him and their relationship.

The film premiered at the 2013 Tribeca Film Festival in New York City, and is the first Polish production that primarily deals with the topic of same-sex relationships. As such, many see Floating Skyscrapers as a work of cinema that challenges contemporary Polish social and cultural norms on homosexuality. The film is noted for its largely clean, straight aesthetic, along with its emphasis on the starker urban landscapes of Warsaw to convey Poland's strict social conventions, which its storyline then attempts to break through and move beyond. 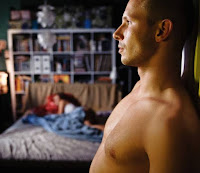 As praiseworthy as the film's convention-shattering intentions are, I must admit I find it to be uncompelling in terms of its largely non-existent character development, flat storyline, meandering pacing, and predictable conventional tragic end.

In short, not only does the title of Jack Page's review of Floating Skyscrapers pretty much sum it up for me – “Diving Right In . . . But Not Making a Splash” – but so does Page's central critique: “Floating Skyscrapers shares an all too safe and familiar depiction of repressed homosexuality as the majority of popular gay and lesbian European cinema. The film offers no new perspective, nor a different variation on the narrative or visual style of similar recent independent feature films. Devoid of any ideological or political agenda, Wasilewski’s vision is considerably tame, but accomplished, yet lacking in any real progression and importance in regards to its increasingly prominent subject matter.”

Of course, others think otherwise; and so I close with Clive Botting's relatively positive review of Floating Skyscrapers.

Kuba’s world changes – he drops his training programme to the consternation of this mother and the film follows his evolving sexuality and its effect on Sylwia and his family in an ever increasing claustrophobic environment. Whilst Kuba dreams of a life with Michal, the latter takes on the task of convincing his concerned mother and distant father that his lifestyle isn’t just a passing fancy.

Floating Skyscrapers is an accomplished second feature and is a touching story of denial and desire that addresses themes of loneliness, love that’s different and its social acceptance in contemporary Polish society.

Tomasz Wasilewski says: “It is about love, or the lack of it, and about the consequences of seeking out its substitutes. It is about wasted opportunities and lost dreams – about the contemporary world and its pitfalls.”

There are sound performances and the film has visual style but the sparse dialogue and clinical approach offers a style magazine presentation of two middle class Polish families with little attempt to elicit audience interest in the characters – we’re looking at a series of photo shots whereas we want to know what makes Kuba tick. What makes him a romantic character, destroying all those who love him? And what of the power and influence of the conservative Catholic Church in contemporary Polish society?

The essence is the family in the context of a gay relationship and its powerful influence on Kuba and Michal. Explore the characters in depth and we may then begin to see the complexities that are the background to this relationship. 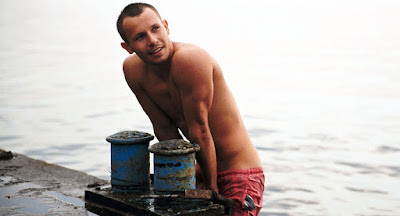 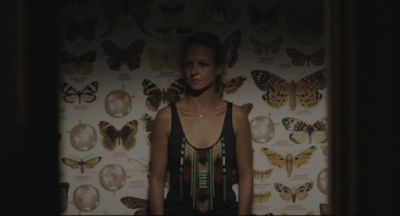