The Golden Compass: Pointing Beyond Authoritarianism 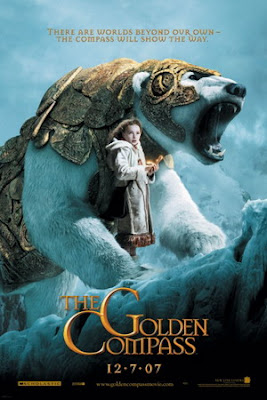 The Office for Film and Broadcasting of the United States Conference of Catholic Bishops (USCCB) has recently come under attack by some Catholics over its positive review of the film The Golden Compass.

The film, a fantasy epic starring Daniel Craig, Nicole Kidman, and Dakota Blue Richards, is based on the first book in an award-winning trilogy entitled, His Dark Materials. The author of these books, Philip Pullman, is a self-avowed atheist, and his Dark Materials Trilogy, which draws inspiration from sources such as Homer and the Bible, has been described as a “creation myth for the 21st century.”

In its review, the USCCB warns of the The Golden Compass’ “anti-clerical subtext, standard genre occult elements, a character born out of wedlock, [and] a whiskey-guzzling bear.” Yet it also notes that “taken purely on its own cinematic terms, [the film] can be viewed as an exciting adventure story with a traditional struggle between good and evil, and a generalized rejection of authoritarianism.”

The Times of London similarly describes Pullman’s books as “a fantasy trilogy which trace the fate of a young girl, Lyra, as she becomes drawn into an apocalyptic battle of good against evil. Evil in Pullman’s books is represented by the church, called the Magisterium, whose acolytes kidnap orphans across England to subject them to horrible experiments in the frozen northern wastelands.”

The director of The Golden Compass, Chris Weitz, has told reporters that in Pullman’s books, “the Magisterium is a version of the Catholic church gone wildly astray from its roots.” Weitz also acknowledges that Pullman’s attack on organized religion has been toned down for the movie: “If that’s what you want in the film,” says Weitz, “you’ll be disappointed.”

Nevertheless, in response to the release of The Golden Compass in the U.S., the Catholic League has worked itself into a frenzy. Not surprisingly, it’s leading the charge in opposing “the anti-religious, and specifically anti-Catholic themes” of Pullman’s books and the first of three films to be released based upon them. Part of the League’s campaign includes a boycott of The Golden Compass film.

Don’t these people ever learn? Calls for boycotts of artistic endeavors always ensure that more people end up hearing about and seeing whatever it is that is being declared objectionable.

Case in point: last year a representative of the Catholic League contacted me, incensed that I had posted this image, and demanding that I remove it. The League also spread the word around about this supposedly “sacrilegious” image. The end result? A record number of people (over 400) visited The Wild Reed in a single day!

Anyway, my friend Rick recently sent me a link to an interview with Philip Pullman by Robert Butler of Intelligent Life. Following is that part of the interview that focuses on Pullman’s response to the latest controversy over his work. I found the ideas of the movie discussed interesting, and Pullman’s candor refreshing. Perhaps you will too.

The fictional world that Pullman creates is dominated by a cruel and repressive church. The Reformation seems not to have taken place, and Jesus barely exists. Many people have taken offence at this portrait of the church. The Association of Christian Teachers urged its members to boycott the stage production. The Mail on Sunday described Pullman as “the most dangerous author in Britain.” Most recently, the American-based Catholic League has called for a boycott of the film on the grounds that it “sells atheism to kids.”

Is he expecting controversy? He pauses: “I am beset, not beset, that’s too strong, I am attended by crazy people.” The day before our interview he had given a reading at the Sheldonian Theatre as part of the Oxford Chamber Music Festival. There were 750 children from primary schools in the Oxford area listening to music and readings. A small boy from one of the schools was taken out “rather ostentatiously” before each of Pullman’s readings and brought back in again when the reading was over. “Apparently his parents objected to his hearing anything of mine on the grounds that he might go to hell if he did.”

Pullman says that people who are tempted to take offence should first see the film or read the books. “They’ll find a story that attacks such things as cruelty, oppression, intolerance, unkindness, narrow-mindedness, and celebrates love, kindness, open-mindedness, tolerance, curiosity, human intelligence. It’s very hard to disagree with those. But people will.”

How will he respond to those attacks? “A soft answer turneth away wrath, as it says in my favourite book.” (Proverbs 15:1.) So he won’t argue back? “It’s a foolish thing for the teller of a story to answer critics. If you’re putting forward an argument, you can argue back and demonstrate why your argument is better than theirs. But if someone doesn’t like a story you’ve written, what are you going to say? ‘Well, you should’?”


NOTE: For more on The Golden Compass, visit the related Wild Reed post, Conversing and Arguing with the Theology of Philip Pullman.

For previous Wild Reed posts that discuss and/or review films, visit:
Pan’s Labyrinth: Critiquing the Cult of Unquestioning Obedience
Reflections on Babel and the “Borders Within”
What the Vatican Can Learn from the X-Men
Reflections on the Overlooked Children of Men
Cristian Draz’s Critique of Brokeback Mountain
The New Superman: Not Necessarily Gay, But Definitely Queer
Casanova-Inspired Reflections on Papal Power – at 30,000 Ft.
Revisiting a Groovy Jesus (and a Dysfunctional Theology)
Reflections on The Da Vinci Code Controversy
Thoughts on The Da Vinci Code
Alexander’s Great Love