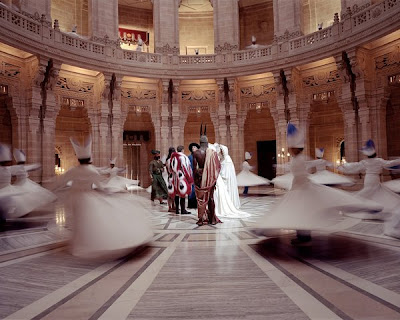 Last night my housemate Brian and I watched Tarsem Singh’s visually mesmerizing and highly entertaining film, The Fall. One particular scene, a wedding scene, featured whirling dervishes, which prompts me tonight to continue my series of posts on Sufism by sharing an excerpt from Neil Douglas-Klotz’s The Sufi Book of Life: Ninety-Nine Pathways of the Heart for the Modern Dervish.

This particular excerpt focuses on the Arabic word bismillah, a word that Sufis often recite when beginning something new, and which may well speak to those of you reading this who feel called to embark on some inner or outer quest.

When we begin anything new, much is unknown. We have plans, but will they work out? Can we be fully ourselves and still connect deeply with others? Is it possible to keep changing and growing, yet still maintain friendships and relationships over time? Each decision to love, to pursue something passionately, means a step into the unknown.

When we take time to meditate, or breathe momentarily in silence at the beginning of each day or year, each new job or relationship, we confront the unknown. This requires courage and heart. The Sufis often begin something new by breathing the Arabic word bismillah, which can be translated poetically:


We begin by remembering
the sound and feeling of the One Being,
the wellspring of love.
We affirm that the next thing we experience
shimmers with the light of the whole universe.


If we look at the world this way, then the reason we exist – and the reason to begin any journey – is to bring out our full humanity, the unique flavor that we alone can offer to the universe’s still-cooking stew. According to the twelfth-century Sufi poet Saadi:


Every being is born for a certain purpose,
and the light of that purpose is kindled in its soul. 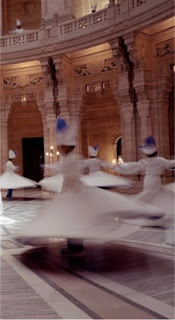 Yet as physicists now tell us, we are inseparably linked to everything in the cosmos. We cannot do without each other. So how do we balance an individual with being in a relationship?

Our individuality is a unique gift. Yet, the Sufi would say that the origin of this gift lies within the heart of the equally unique, divine “I Am” that fills the whole cosmos. Every blade of grass says, “I am!” as it expresses its selfhood. We can affirm that we can become fully integrated, fully human beings, deeply in contact with other people, with nature, and with the ultimate Source. It is yet another way of saying “bismillah!”

To the Sufi, each of these pathways is really like an e-mail address of the Beloved, which all go to the same in-box. Of course, the feelings, names, and qualities of the Sacred are really limitless. But finding ourselves capable of a hundred or so different feelings and responses to life is a good start toward self-knowledge and, ultimately, greater joy and fulfillment.

Traditional translations of bismillah are “in the name of God” or “with the name of Allah.” From its roots, the word means, literally, “with, along with, or within (B) the sound, atmosphere, name, or light (SM) of Unity or the One Being (ALLAH).” In the Aramaic version of the Gospels, Jesus uses a similar expression when he mentions praying “in my name” (b’sheme), which can also mean “with my sound or atmosphere.” He points to a way of prayer native to the Middle East: If I bring myself into the same rhythm of breath or movement as a teacher or guide, that person becomes a door to reconnect me to the remembrance of sacred unity. . . . [And] when we remember to connect our heart to the Heart of the Cosmos, we recall that, as the Sufis say, “God is your lover, not your jailer.”

"Yet as physicists now tell us, we are inseparably linked to everything in the cosmos."

Poetically and rhetorically this is spot on. As science, sorry, you're drawing on only one possible school of quantum mechanics here - there are many. Are you talking about quantum entanglement? The simultaneous superposition of quantum states? Many-worlds theory?

Let's be wary of rhetorical appeals to hard science without first demonstrating an understanding of the hard sciences.

Any belief system that includes spinning about seems like organic joy to me. I think if the Pope took a little whirl in St. Peter's square once and a while -- a chlid-like, uninhibited twirl for the fun of it -- the world would be a better place.

"I think if the Pope took a little whirl in St. Peter's square once and a while -- a chlid-like, uninhibited twirl for the fun of it -- the world would be a better place."

I'm sure he has many times, and hopping and skipping too not during mass though. He's been in vatican city for 28 years after all.