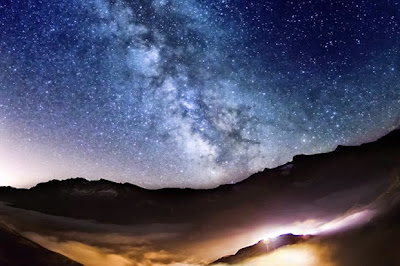 Following is a second excerpt from theologian Michael Morwood's 2013 book It's Time: Challenges to the Doctrine of the Faith. As with the first excerpt I shared, this one focuses on the Divine Presence, an understanding that the word "God" points to a Mystery that permeates everything that exists. For Morwood, patterns of the Divine Presence can be seen expressed in humanity whenever we choose co-operation and sharing over violence and domination. We also see, says Morwood, "that 'salvation' for humanity is linked to living in harmony with and respect for one another."

One of the major scientific developments in recent decades is the shift from understanding the world around us in purely physical or material terms, as if everything from atoms to galaxies operated like machines and that everything could be reduced to its working parts. Those of us who are older will remember studying physics in school. It was all rather simple: a case of learning what went with what, and knowing the laws explaining the how and why of what happened.

Nowadays science finds itself speaking in terms of mystery and wonder as it tries to explain the how and why of reality. How and why, at the deepest level of matter, particles get together with other particles to form atoms, atoms get together with other atoms to form molecules, molecules get together and form single cells, and single cells get together and form multi-cellular life. How, for example, do sixty trillion cells in our bodies know what to do? How do some cells in an embryo "know" to form a set of ears, and other cells produce a heart and other cells produce kidneys?

These processes of development can no longer be adequately explained in purely physical terms, as if this goes with that and that goes with this and look what happens. Science acknowledges something deeper within the very fabric of matter, something that is more than matter. Energy is working in tune with some organizing principle that is not physical. Scientists refer to this as "consciousness" or "mind" operating at every level of matter. This is not the consciously aware "mind" that we humans exercise, but mind/consciousness that is an essential aspect of physical reality itself.

As we study the unfolding of matter throughout the universe and study the development of life on this planet, it seems there is inbuilt into matter the capacity to co-operate with other entities in order to produce something beyond each of the entities. Cells have the capacity to organize themselves, to maintain and repair themselves, to store and remember information and to call upon it when needed, and to work in harmony with other cells to produce the wonders of a flower, a bird, the human body. There is an inbuilt system of intentionality in the constant movement to development, to produce something beyond the co-operating cells themselves,. And there is no thinking involved in this process, not the way we humans experience thinking. Each of sixty trillion cells in our bodies produces 10,000 bio-electro-chemical reactions every second. The reactions need to be almost instantly correlated and set in motion. Our bodies would surely be in a mess if each cell had to stop and think about what it needed to do.

This capacity to self-organize and to work in relationship with other entities is universal. Without it, the universe could not have produced galaxies or stars or planets or life on earth. Here, on earth, the same pattern is the driving force of evolution. Scientists insist that co-operation, not survival of the fittest or domination, is the key pattern in the emergence of life.

Let us explore how this basic information might shape our understanding of "God" as a universal Presence underpinning all that has ever existed.

If we take seriously that energy and consciousness are all-pervasive and woven into the very fabric of reality then this knowledge could be the best means we have for a deeper understanding or appreciation that the Divine Presence is everywhere. This is not to suggest in any way that the Divine Presence can be reduced to energy or consciousness. Rather, the information helps us to appreciate universality on a grand scale. When we recognize patterns operating on such a vast scale, we can use these patterns as contemporary pointers to the Divine present and active always and everywhere in the universe. This is not some sort of pantheism. The Divine Presence is more than the universe or the world around us and far more than anything we can comprehend in human notions.

See also the previous Wild Reed posts:
• Michael Morwood on the Divine Presence (Part I)
• In the Garden of Spirituality – Michael Morwood
• Prayer and the Experience of God in an Ever-Unfolding Universe
• A Return to the Spirit

Divine presence is as close as opening my eyes! Since my discovery of this concept, no-thing, no piece of creation has looked, tasted,felt, or been the same.
Thank You
Kay. 61y/o