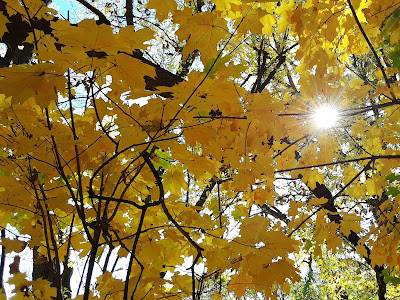 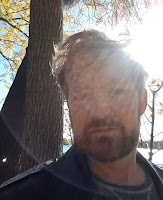 Well, the winter solstice has been and gone. . . . Time, then, to take a look back on the autumn that has ever-so-recently ended. 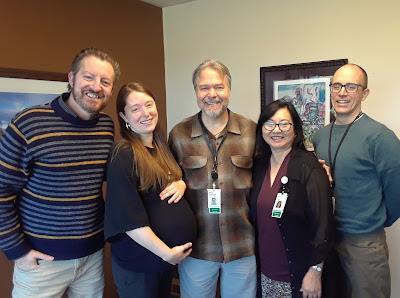 The big change or, perhaps better still, development that I initiated and continue to participate in is one that began at the end of August when I commenced a year-long chaplain residency at Abbott Northwestern Hospital (ANW) in Minneapolis. In the photo above I'm pictured with my fellow resident chaplains Katie, Hae and Chandler, and our supervisor Mark (center).

Four months into it, my chaplaincy work at ANW continues to be both a challenging and rewarding experience, and one through which I continue to learn what it means to embody the presence of the Sacred, and thus be a listening and healing presence for others.

What exactly is meant by this term "healing presence"? James Miller and Susan Cutshall describe it well in their book, The Art of Being a Healing Presence.

Healing presence is the condition of being consciously and compassionately in the present moment with another or with others, believing in and affirming their potential for wholeness, wherever they are in life.

Since starting my chaplain residency I've been getting some very positive and helpful feedback from my peers. Chandler, for instance shared the following in our CPE Level 1 evaluation.

Michael brings many strengths to his work. He has done a really admirable job of integrating his impressive intellectual gifts with his emotional sensitivity and charismatic charm. One is truly pressed to find the seams in his embodied theology of the sensual. It's been a delight to spend time getting to know such a mature and deeply thoughtful man.

While Katie shared the following.

Michael has a quiet and grounded confidence in his sense of self and his spirituality. This confidence lends to a calm centeredness in his interaction with others – a beautiful gift for ministry. Michael can be both delightfully irreverent and also keenly attuned to the sacred spaces all around us. Both of these modes are authentic and true. 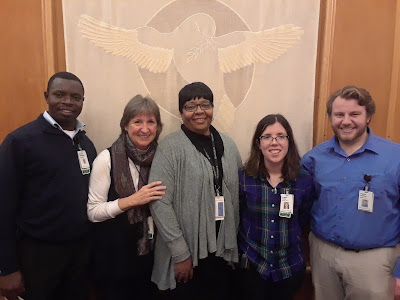 Above: The wonderful group of chaplain interns we had at ANW from the beginning of September until mid December. From left: Simeon, Verna, Yvette, Angela, and Parker. They're going to be missed for sure. A new group of interns start at the end of January. 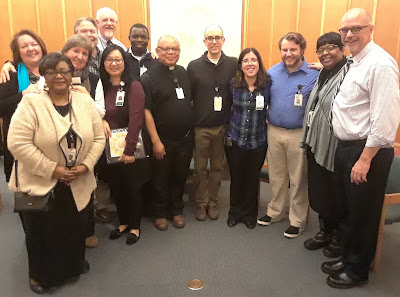 Above: Members of the Spiritual Care Department at ANW, including staff chaplains, residents, and interns – December 11, 2017.

For more about my interfaith chaplaincy work, see the previous Wild Reed posts:
• Interfaith Chaplaincy: Meeting People Where They're At
• Chaplaincy: A Ministry of Welcome
• Spirituality and the Healthcare Setting
• Getting Into the Holiday Spirit 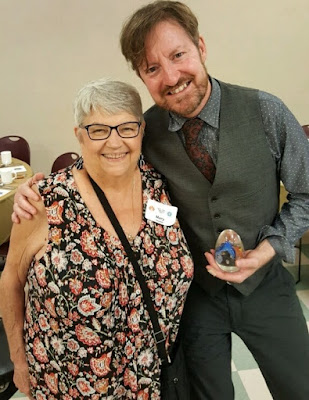 Above: With my dear friend Mary Beckfeld on the evening of the autumnal equinox, Friday, September 22, when I was honored to be one of five recipients of the Catholic Coalition for Church Reform's 2017 Adsum Award.

"Adsum" is a Latin word which means "I am present and listening." Whenever the participants in Vatican II were gathered at St. Peter's Basilica their traditional prayer was the exclamation: Adsumus – "we are present and listening." CCCR's Adsum Award recognizes individuals who have made an "extraordinary commitment to be present and attentive to the Spirit, to be partners in re-creating the face of the church here in the Archdiocese of St. Paul-Minneapolis."

This year's awards were presented at a special dinner hosted by CCCR and the Council of the Baptized at St. Joan of Arc Church. The other 2017 Adsum Award recipients were Bernie and Eileen Rodel, Ed Walsh, and Jim Moudry.

For more about this evening and the history of CCCR, click here. 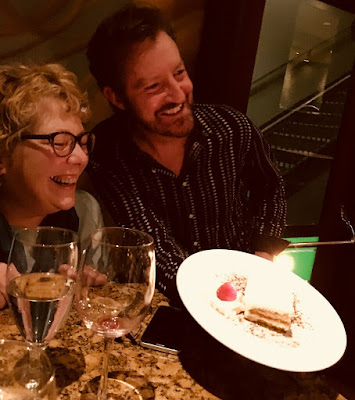 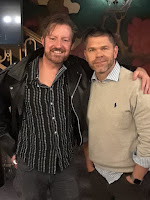 For more birthday celebrations pics and my reflections on turning 52, see the The Wild Reed post, On This Echoing Day of My Birth. 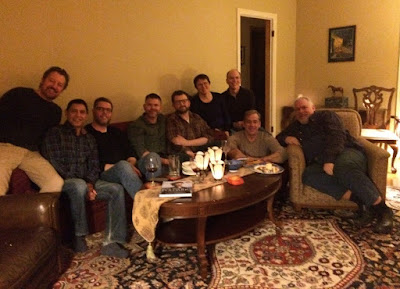 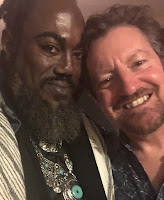 Above: With friends to watch the season three finale of Poldark – Sunday, November 19, 2017. From left: Me, Raul, my boyfriend Brent, Pete, Jeffrey, Kathy, John, Jim, and James.

Left: With my friend LeMonte, who was visiting the Twin Cities from Florida on the weekend of November 18-19.

Throughout season three of Poldark I hosted a "Poldark party" at my home every Sunday night! For more images of these gatherings and to learn about Poldark, click here. 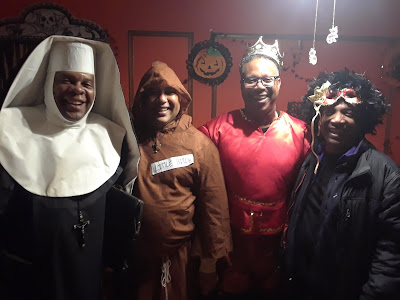 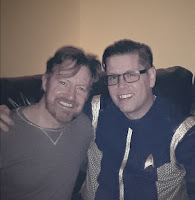 Above and below: My friend Alfredo's October 28 Halloween-themed party. Alfredo's pictured above, second from the left, dressed as Friar Little Bitch.


Right: With my boyfriend Brent at Alfredo's party. Brent's dressed as a Starfleet officer. 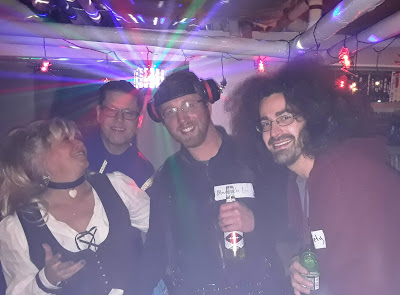 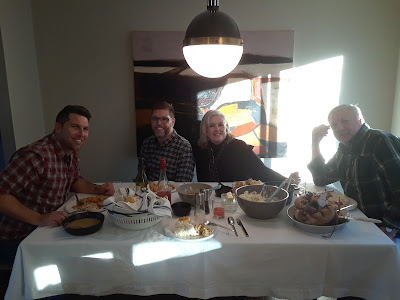 Above: Brent and members of his family, celebrating the Thanksgiving holiday – November 23, 2017. 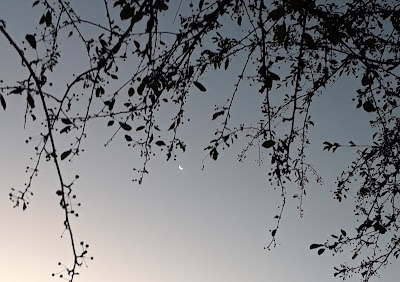 Above and below: The passing of autumn and the return of winter. 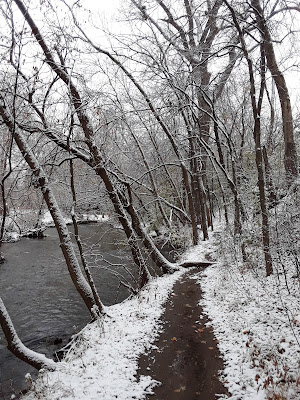 Autumn 2017 Wild Reed posts of note:
• A Time of Transformation
• The Price I Pay
• Progressive Perspectives on Colin Kaepernick and the "Take A Knee" Movement
• St. Michael, "Wave Maker"
• The Catalan Firefighters: Listeners of the "Discerning Voice" Within . . .
• A Great Honor
• Michael Greyeyes' "Role of a Lifetime"
• Catholics Recognize and Celebrate the Truth of Transgender People: “Their Quest for Authenticity Is a Quest for Holiness"
• Autumn by the Creek
• On This "Echoing Day" of My Birth
• Beloved and Antlered
• Buffy Sainte-Marie, "One of the Best Performers Out Touring Today"
• At Hallowtide, Pagan Thoughts on Restoring Our World and Our Souls
• Autumn Snow
• The Music of Buffy Sainte-Marie: "Uprooting the Sources of Disenfranchisement"
• Saying "Yes" to Marriage Equality in Australia
• Phillip Clark on the "Karmic Wake Up Call" of a Year Ago
• Buffy Sainte-Marie: "Things Do Change and Things Do Get Better"
• Thomas Moore on the "Ageless Soul"
• In Australia, "Love Has Had a Landslide Victory"
• What a Man! – Connor Beaton
• Four Balanced Perspectives on the Wave of “Sexual Misconduct” Accusations Against Influential Men in the U.S.
• Celebrating Poldark
• With Republicans at the Helm, It's the United States of Hypocrisy
• Chaplaincy: A Ministry of Welcome
• A Timely Reminder
• Happy Birthday, Mum!
• Advent: A "ChristoPagan" Perspective
• Getting Into the Holiday Spirit
• Quote of the Day – December 19, 2017
• One Divine Hammer

Labels: Interfaith Chaplaincy, Out and About - 2017