Yesterday, my friend Rick alerted me to an article about the late U.S. broadcaster Walter Cronkite. It’s an article that tells such a great story that it’s worth reprinting in its entirety (complete with video link and a couple of added pictures). Enjoy!

How Do You Turn Walter Cronkite
Into a Friend of Gay Rights? Zap Him. 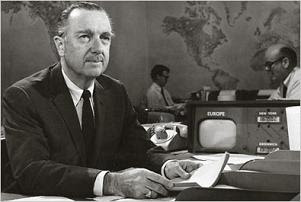 Walter Cronkite’s illustrious career is remembered for the historic events he covered, from the assassinations of John F. Kennedy and Martin Luther King Jr. to the moon landing and the Vietnam War. But Cronkite also reported on burgeoning social movements, including the struggle for gay liberation. After becoming a target of that movement, Cronkite would become a behind-the-scenes ally.

Following the Stonewall [uprising] in 1969, as the nascent gay rights movement became increasingly combative, a gay Philadelphia teenager initiated his own guerrilla war aimed at television, including the CBS Evening News. Nineteen-year-old Mark Segal became angry when he and a male friend were thrown out of a television dance program one August afternoon in 1972 after the program’s host saw them dancing together. In retaliation, Segal barged into the studio of Philadelphia’s WPVI a few days later during its evening newscast. Startled studio personnel wrestled him to the floor, tied his hands with a microphone cable and called the police.

Segal became a walking terror with his “zaps,” as they were called. In 1973, his targets included The Tonight Show Starring Johnny Carson and The Mike Douglas Show. He and a friend staged their last and most notorious zap when they posed as college students and obtained passes for the CBS Evening News With Walter Cronkite. Midway through the broadcast on Dec. 11, 1973, as Cronkite began a story about Secretary of State Henry Kissinger, Segal darted in front of the camera with a sign reading “Gays Protest CBS Prejudice.”

“I sat on Cronkite’s desk directly in front of him and held up the sign while the technicians furiously ran after me and wrestled me to the floor and wrapped me in wire – on camera,” he recalled in an interview. “The network went black while they took us out of the studio.”

Ever the professional, Cronkite reported on the event. “Well, a rather interesting development in the studio here – a protest demonstration right in the middle of the CBS News studio,” Cronkite told viewers. He later explained: “The young man was identified as a member of something called Gay Raiders, an organization protesting alleged defamation of homosexuals on entertainment programs.” Segal was charged with trespassing.

Cronkite may have been more startled when Segal’s attorney tried to serve him with a subpoena to testify. After CBS attorneys blocked repeated attempts to deliver the document, Segal’s lawyer informed the network of a little-used New York law that made photocopies of a subpoena as valid as an original. He threatened to make copies available to the Hells Angels, with a reward for anyone who served the subpoena. Faced with the prospect of having Cronkite stalked by gay activists and bikers, CBS lawyers relented.

When the trial began in April 1974, Cronkite took the stand, but CBS lawyers objected each time Segal’s lawyer posed a question. During a recess, Segal felt a tap on his shoulder. “Why did you do that?” Cronkite asked about the incident in the studio.

“You’re news censors,” Segal responded. The anchorman was appalled. “If I can prove it,” Segal then asked, “would you do something to change it?” He cited three examples, including a CBS report on the second rejection of a gay rights bill by the New York City Council. “Yes, I believe I wrote that story myself,” Cronkite said.

“Well, why haven’t you reported on the 23 other cities that have passed gay rights bills?” Segal asked. “Why do you cover 5,000 women walking down Fifth Avenue in New York City when they proclaim International Women’s Year on the network news, and you do not cover 50,000 gays and lesbians walking down that same avenue proclaiming Gay Pride Day? That’s censorship.” Genuinely moved, Cronkite shook Segal’s hand and thanked him.

The judge slapped Segal with a $450 fine. At the same time, Segal realized that his celebrity status was becoming a distraction. “I began to wonder if they were using me or I was using them – I was not quite sure,” he remembered. “After the Cronkite zap, the message began to get lost in the commotion. It began to look to me very unsavory.”

Nevertheless, Segal’s tactics paid off. Cronkite arranged meetings at CBS where Segal could voice his complaints to the top management. On May 6, 1974, Cronkite’s newscast featured a segment on gay rights.

“Part of the new morality of the ’60s and ’70s is a new attitude toward homosexuality,” Cronkite told his audience. “The homosexual men and women have organized to fight for acceptance and respectability. They’ve succeeded in winning equal rights under the law in many communities. But in the nation’s biggest city, the fight goes on, with the city council due to vote on the matter again this week.”

Reports on the status of gay rights in various cities followed, with one CBS correspondent pointing out 10 cities that had passed legal protections for gays and reporting that similar laws were under consideration in at least four others. At a New York luncheon 34 years later, I asked Cronkite about the zapping incident. “Oh, yes,” he said with a smile and twinkle in his eye. “I remember that.” 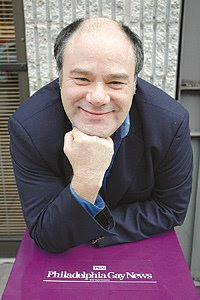 Meanwhile, Segal established his own newspaper in 1975, the Philadelphia Gay News, and remains its publisher today.

“He was the kind of man who believed in human rights for everyone,” Segal said of Cronkite. “I am amazed and humbled by his willingness to reach out to me. He was a bridge between the gay movement and major media. We remained friends, and it was a privilege knowing him.”