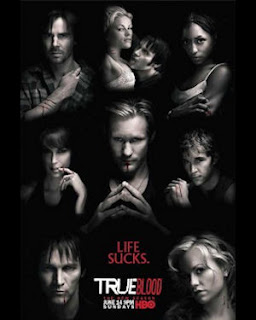 Tomorrow evening some friends and I will be getting together to watch the 61st Primetime Emmy Awards – hosted this year by the talented (and cute) Neil Patrick Harris.

Although I’m looking forward to tomorrow night’s broadcast, I must admit I’m a bit miffed that my favorite TV show, HBO’s highly successful True Blood, has been snubbed at this year’s Emmys.

[“True Blood”’s audience] has been consistently growing since the show made its debut last September. [It] drew 5.3 million viewers for an episode at the end of August, which set a record for the show and was the largest viewership for an HBO show other than “The Sopranos” in more than five years.

“True Blood” is up for three Emmy Awards for Art Direction, Casting and Main Title Design but it was shutout of the major categories.

One True Blood star has been quite vocal in expressing her displeasure at the show’s snubbing. 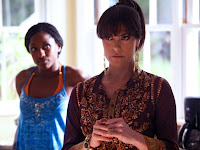 Michelle Forbes doesn’t hold back when saying how she feels about “True Blood” being pretty much shut out of this year’s Emmys.

“Excuse me, but f—k awards!” says Forbes, who plays the very evil but deliciously sexy [maenad] Maryann Forrester in the hit vampire series.

“That’s not where the glory is. The glory is in the audience,” she adds. “That’s who we tell the stories for. It’s not for, with all due respect, the critics and not for the awards shows, but for the audience.”

Amy Wilkinson sums up well my feelings about True Blood’s snubbing (and the show itself) in the following piece she wrote for MTV’s Hollywood Crush blog. 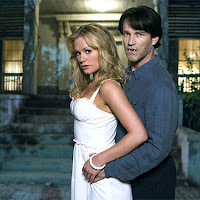 It’s as predictable as a vampire’s thirst for human blood. Each year a more-than-deserving series is left out in the cold come Emmy nominations time. The glaring omission that had me seeing red this year is HBO’s much-talked-about vampire series, True Blood. Sure, they picked up a few Creative Arts (or “Schmemmys” as Kathy Griffin calls them) nominations in art direction, title design and casting, but no “Big Show” nods to speak of. Oh, the bloody horror! We at Hollywood Crush are obviously fans of the show and in protest of the series’ snub we’ve compiled a list of the five reasons the show deserved to be nominated (the Academy of Television Arts & Sciences — we hope you’re paying attention!).

1. It’s the highest rated show on HBO
The second season premiere of True Blood garnered 3.7 million viewers, the network’s highest rating since The Sopranos finale two years ago. The show even bested itself this week soaring to 3.9 million blood-thirsty watchers. Yet, it’s HBO brother Entourage, a show which rambles through the same predictable plot arc each season, gets a nomination for “Outstanding Comedy Series.”


2. It has a deeper message
Sure, it’s a show about vampires. Sexy ones at that. But when you dig a little deeper in the dirt you find an allegory that examines gay rights, racism, and religion.

3. It has a superb cast
No weak links here. Virtually the entire cast of True Blood is Emmy worthy (Anna Paquin’s even got an Oscar to her name), but we give special props to Ryan Kwanten for his portrayal of earnest yet dim-witted Jason Stackhouse and Alexander Skarsgård who plays vampire Eric [right] with a chilling likability.

4. It’s an adaptation with legs
Instead of copying Charlaine Harris’ The Southern Vampire Mysteries series scene for scene, creator and director Alan Ball used the author’s world as a reference point for his own vision of Bon Temps, LA. He’s noticeably deviated from the books (Lafayette [left] should be dead by now), but many of Charlaine’s fans don’t seem to mind, which speaks to the likability of Ball’s series.

I don't have cable tv anymore, so I haven't seen this yet - maybe I'll rent it. An old vampire tv series I liked was Kindred: The Embraced, :)

Yes, it's definitely worth checking out. Season 1 is already out, while Season 2 is set for release some time soon. I'm sure many public libraries would have them. I've noticed they tend to stock lots of cable TV series on DVD now.

I no longer have cable either, but this past summer I worked a few hours most weekends in a friend's garden. As payment he'd TiVo True Blood each week and put it on a disc for me! Then some friends and I would gather to watch the latest installment.

Thanks, Crystal, for stopping by. It's always good to hear from you.

That was nice of your friends, Michael. The show sounds interesting. I never heard of it but I don't have HBO either. I never watched the Sopranos but I don't like anything violent so don't know if I would have liked that. My weakness is "One Life to Live" which I have watched since high school. At the moment they have a very good "coming out" storyline. Some of it is somewhat emotional for me to watch since I am not really "out" so it makes me think.

I LOVE this show! Not only for the constant barrage of eye candy but as soon as I started watching it I caught on to the obviously, subliminal pro-gay rights themes present throughout the show. And really vampires and gays today do have a lot in common, we just love differently and the world needs to grow up and appreciate how we love. It's not the difficult...