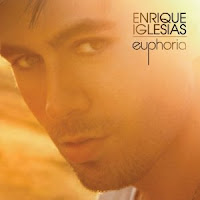 During my summer vacation in Wisconsin, I bought Enrique Iglesias' latest album, Euphoria. One of my favorite tracks on this album is “Heartbeat,” a duet that Enrique performs with Nicole Scherzinger.

Euphoria is as bright as its title, a firm return to romance for [Enrique Iglesias]. Not that he’s entirely abandoned the idea of a dancefloor hit — not with the blaring Pitbull collaboration “I Like It,” complete with ice-sheet synths and an “All Night Long” interpolation, playing such a prominent role on the record — nor does he rely on old-fashioned balladry, sometimes drawing from the chilly textures of Ryan Tedder on his duet with Nicole Scherzinger, letting Akon in for an Auto-Tuned reggae groove on “One Day at a Time,” which is enough for Euphoria to feel modern without alienating older audiences. Despite these contemporary flourishes, the heart of this album resides in Iglesias’ romantic balladeering, the kind of croon that crosses cultures, so much so that the tracks here slip between Spanish and English without much notice. No matter the language, Enrique maintains the seductive mood on Euphoria.

See also the previous Wild Reed posts:
The Inherent Sensuality of Roman Catholicism
Sometimes I Wonder . . .
"More Lovely Than the Dawn": God as Divine Lover
Waiting to Hold You

Recommended Off-site Link:
The Making of Euphoria - An Interview with Enrique Iglesias