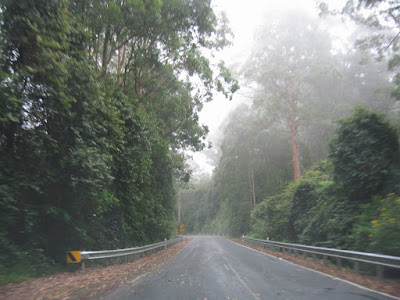 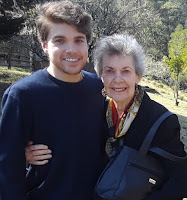 This time last week I journeyed with my mother and youngest nephew Brendan (left) from Guruk (Port Macquarie) to Gunnedah.

For Mum and I, Gunnedah is our hometown. I moved away at 18 when I started college in 1984, while Mum left when she and my late father relocated to Port Macquarie in 2002. Since 1994 I've made a number of visits to Gunnedah to see relatives and friends when I've made trips home to Australia from the U.S. 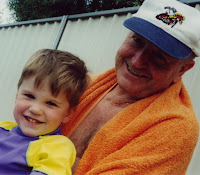 As a very young child, Brendan visited Gunnedah with his family a few times in the late 1990s and early 2000s. (He's pictured at right with his Grandpa Bayly, my Dad, in Gunnedah in December 2000.)

Of the family members who returned to Port Macquarie for Dad's funeral, Brendan stayed on the longest with Mum and I. So when the idea surfaced early last week to visit relatives and friends in Gunnedah, Brendan, having only a few distant memories of his previous visits there, was excited to join us in traveling there. We started off on our road trip in the smoke haze of the Lindfield Park Road bushfire, which has been burning west of Port Macquarie for over a month. With an eclectic musical accompaniment that included Radiohead, Red Hot Chili Peppers, The Drifters, Roy Orbison, Buffy Sainte-Marie, Carl Anderson and Kiki Dee we drove west on the Oxley Highway, which the motoring club Shannons.com describes as a "sinuous ribbon of tarmac linking the Pacific Highway with the New England Highway, snaking its way in spectacular fashion over the Great Dividing Range."

Interestingly, just days before our journey, parts of the Oxley Highway were closed due to snow and ice. Thankfully that had all melted away by the time we set off, with only a few patches of snow remaining high on the ridges around Walcha.

Following is more of Shannons motoring club's description of the Oxley Highway from Port Macquarie to Bendemeer. This colorful description is accompanied by photos of Mum and Brendan and I on our trip across the mountains last Wednesday, August 14, 2019.

As far as top runs go, the Oxley really does have the lot – from fast sweepers to tight hairpins, flat farmland to mountain ridges. On top of that, the scenery is pretty damn good too – although you'll need to keep your focus firmly on the road ahead on many testing sections over the mountains.

[Twenty minutes west of Port Macquarie is] Wauchope, an old timber community, where if time isn't of the essence you can always drop in on Timbertown and get a feel for what life must have been like back in the pioneer days.

Pushing further west you'll find the road winds its way pleasantly through the surrounding bush and farmland, passing through the odd small community like Long Flat, where you'll find a good pub that's a popular gathering point for weekend bikers.

A bit after Long Flat the Oxley begins its ascent into the mountains, the road clawing the hillsides as you climb up and away from the farmlands and into the bush-covered mountains. There are some pretty impressive views at this point, but don't relax too much because there's the odd sharp corner too.

You'll know when you've begun the Oxley proper [as the] road continues to climb through thick bush and impressive forests, linking a seemingly never-ending chain of medium, tight and even tighter corners. 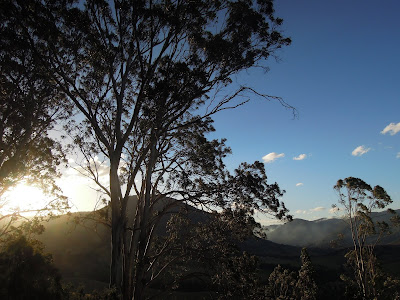 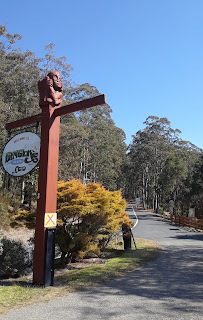 Best of all, because the nearest capital city (Sydney) is some four or five hours away, the amount of traffic here never seems to be too annoying. You do get the odd truck or caravan, but then when you're still heading uphill, you won't need too much of straight to blast past – use your head; in most places there's very little runoff should things go awry.

Just when you start to think that you can't take another 35km/h corner, and about an hour after Port Macquarie, an oasis of calm swings into view. The Gingers Creek roadhouse has drinks, snacks and petrol, accommodation and even a licensed a la carte restaurant. 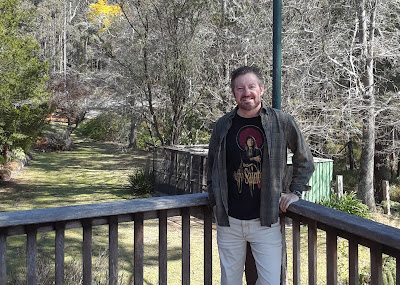 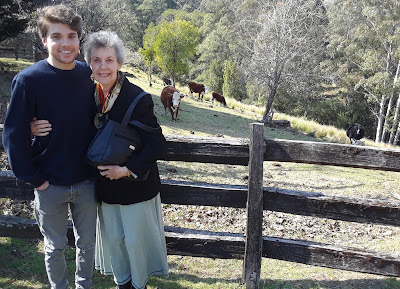 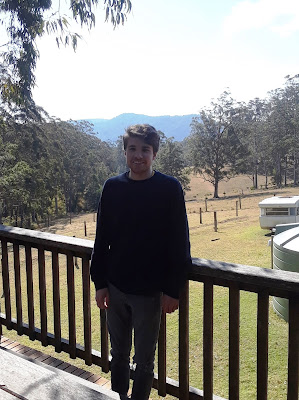 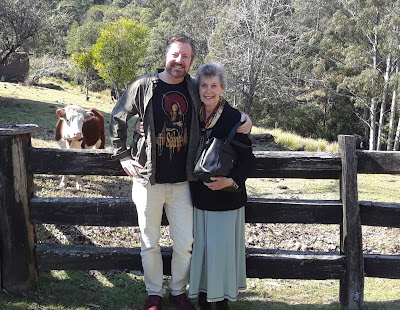 [Continuing west, you'll proceed] through Cottanbimbang National Park, and then the countryside opens out as you reach the New England tablelands. From this point on you've got [sweeping turns] and long country straights through undulating countryside that's simply bliss to rocket through on a bike [or, in our case, drive through in a car!].

Walcha signifies the end of the really fun stuff for the Oxley, although the Oxley itself continues on for another 50km to Bendemeer. 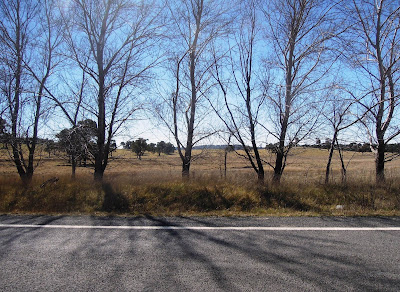 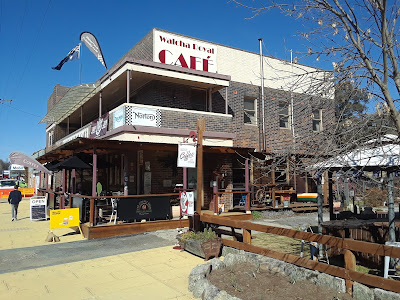 Above & below: Lunch at the Walcha Royal Cafe. 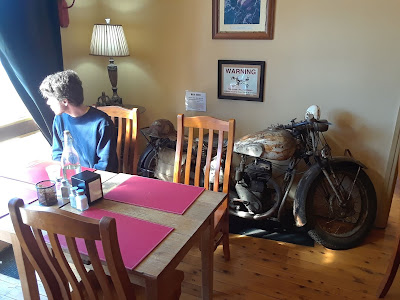 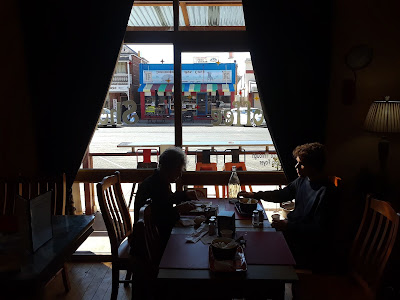 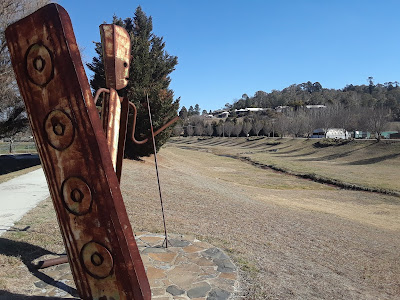 About Walcha, Wikipedia notes the following.

Located at the south-eastern edge of the Northern Tablelands, New South Wales, Australia, Walcha serves as the seat of Walcha Shire. Walcha is located 425 kilometres (264 mi) by road from Sydney at the intersection of the Oxley Highway and Thunderbolts Way. The Apsley River passes through the town to tumble over the Apsley Falls before joining the Macleay River further on. Originally the river caused flooding in the town prior to a levee bank being constructed and saving the town from more floods. At the 2016 census, Walcha had a population of 1,451 people.

The area is thought to have been occupied by the Djangadi Aborigines for 6000 years prior to European settlement. The tablelands had places for ceremonies and trade of goods, and there are traces of bora grounds near Walcha. In the colder months, tribes retreated to the gorge country to the east, where fish and animals were plentiful. In 1818, John Oxley was the first European person to discover the area and the falls which were later to be named Apsley Falls.

Hamilton Collins Sempill was the first settler in the New England area when he took up the ‘Wolka’ run in 1832, establishing slab huts where Langford House now stands. . . . A ‘wool’ road to Port Macquarie (the Oxley Highway) was under construction in 1842 for the transportation of wool from New England to the coast. Walcha Post Office opened on July 1, 1850. The mail arrived from Macdonald River (now Bendemeer). Walcha was gazetted as a village site in 1852. . . . On April 5, 1878 Walcha was proclaimed a town, when it was gazetted, the boundaries defined and a courthouse was built. A rail link to Sydney and Uralla opened at Walcha Road in 1882. The town became a municipality in 1889. 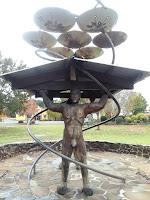 . . . [Today] Walcha has an Open Air Gallery where local, national and international artists have combined to create a unique streetscape with about 41 sculptures and artworks, plus 30 sculptured verandah posts in front of local businesses. There is approximately one artwork per every 85 citizens in the Open Air Gallery, along with a large collection of works in the town's gallery, making Walcha a very cultural and artistic community for its size. 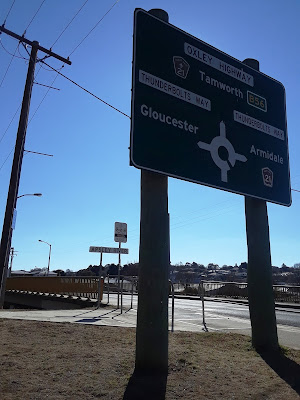 From Walcha we continued west to Tamworth via Bendemeer, and then on to Gunnedah (below). 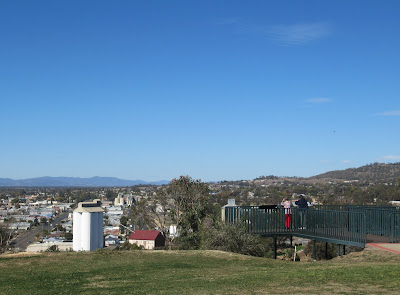 NEXT: An Unexpected Visitor

Beautiful. What a lovely journey. Thanks for taking us along.

Wonderful read, Michael. I have travelled that road many times and appreciated the scenery, but your descriptive words and mention of the history will make the journey all the more special.

Seems like a perfect trip to take with your Mum and Nephew Brendan. It must have been so good for all of you. Plus great photos!