Wayne Self on the Chick-fil-A Controversy: "This Isn’t Simply About Marriage" 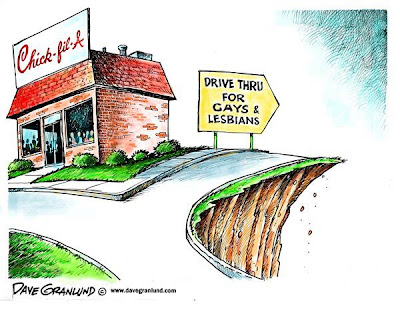 When it comes to the Chick-fil-A controversy, playwright and composer Wayne Self really says it best. His comments below are excerpted from a recent post on his blog, Owldolatrous Productions. And I want to thank my friend Adam for bringing Wayne's commentary to my attention, one that's been called a "must read essay." (Note: Dave Granlund's cartoon pictured above, does not accompany Wayne's original post.)

• In 29 states in America today, my partner of 18 years, Cody, or I could be fired for being gay. Period. No questions asked. One of those states is Louisiana, our home state. We live in self-imposed exile from beloved homeland, family, and friends, in part, because of this legal restriction on our ability to live our lives together.

• Two organizations that work very hard to maintain this status quo and roll back any protections that we may have are the Family Research Council and the Marriage & Family Foundation. For example, the Family Research council leadership has officially stated that same-gender-loving behavior should be criminalized in this country. They draw their pay, in part, from the donations of companies like Chick-fil-A. Both groups have also done “missionary” work abroad that served to strengthen and promote criminalization of same-sex relations.

• Chick-fil-A has given roughly $5M to these organizations to support their work.

• Chick-fil-A’s money comes from the profits they make when you purchase their products.

Nobody has come up with one example of an overt action that Don Cathy, President of Chick-fil-A has done to a homosexual.

He said that he thinks marriage should be between a man and a woman and probably has financially supported political candidates who agree with him on that issue.

Yet millions hate him and legal obstacles are being placed in front of his attempts to increase his business because of an interview in a Baptist magazine.

Christian bakers and photographers have had to pay heavy fines for having refused to provide services to homosexuals who want to marry. People working for Catholic adoption agencies in Boston and New York have lost their jobs because their employer was forced to shut down.

What things will I be required to do to avoid being called homophobic. Please give us a procedures manual, Michael, so that we will be able to avoid jail and fines.

Did you even read the article? Amazing how you were able to gloss over all the points made and still make such a stupid comment in your opening sentence.

I am surprised you don't think that donating 5 million dollars to deny a group their civil rights overt. What are you waiting to see to understand that this is discriminatory? Make no mistake this is hateful and wrong.

To Ray Marshall, here are three simple steps to not being labeled homophobic.

1) Cheerfully accept our definition of your sex life as being perverted.

2) Cheerfully agree that you not be allowed to marry who you love, because we say so.

3) Cheerfully thank us for saying that we love you as good Christians, while we impose these conditions upon your life.

Ray you stick up for what you believe.Thank god there,s someone on the other side of the Atlantic thats taking a stance against the homosexul lifestyle. They just dont get the word wrong .Jesus had plenty to say about sex wnen he quoted the mossiac law that was enough .O and on the sermon on the mount (blessed are the clean in heart for they shall see god).Homosexuals are obsessed with sex and sexuality .But the agenda and ideaoligy is the main thing there after its the kids that we must protect .Keep this perversion out of our schools .