From the Palliative/Spiritual Care Shelf 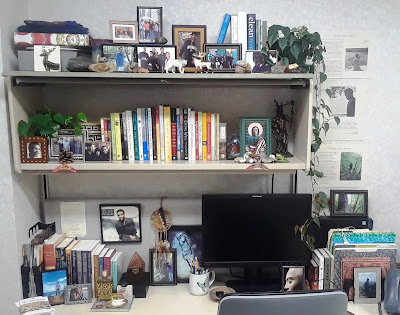 I continue today my series that highlights the wisdom found on my bookshelf at work. As most reading this would know, my “work,” since September 2018, is that of a palliative care interfaith chaplain at a hospital just north of the Twin Cities.

In this sixth installment I share an excerpt from Richard F. Groves and Henriette Anne Klauser’s book, The American Book of Living and Dying: Lessons in Healing Spiritual Pain, described by Richard Rohr, O.F.M. as an “excellent and very readable book [that] finds new ways to create life even out of death . . . [and] opens avenues of healing and hope.”

(NOTE: To start at the beginning of this series, click here.) 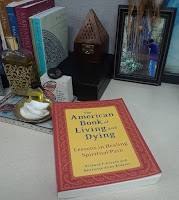 Many of the ancient texts focused on a person’s journey into the afterlife, yet they also taught lessons about how to deal with the process of death and dying. During the final phase of dying, called the death vigil, our ancestors believed that it took an entire village to help someone die well.

There are remarkable connections between the Egyptian manuals for the dying and the Hebrew Psalter, as well as parallels among Taoist, Buddhist, and early Christian writings. Similarities found in ancient Celtic, Middle Eastern, and Western Monastic traditions are too specific to be coincidental. Such cultural cross-pollination points to a collective wisdom among our ancestors about what brings peace at the end of life. Parallels extend to rituals for grieving that include the Mexican Dia de los Muertos, the Native American potlatch, and the annual August Japanese O-Bon festival.

Our ancestors had a relentless commitment to the elusive thing we yearn for in the West – a peaceful death. Through centuries of careful observations, they created an entire language to name the gradations of the dying process. In hospice circles today we refer to a patient’s final stage with a single phrase: active dying. The ancients on the other hand found a detailed vocabulary to describe the many and distinct stages at the end of life. Both the Western monastic and the Tibetan Buddhist traditions include forty or more stages in the life-to-death transition. Each of these phases is associated with a particular set of tools to support both patient and caregiver.

Because the books of the dead span diverse spiritual and cultural traditions, not to mention distances of centuries and geography, we would expect differences in content and philosophy. More surprising are the similarities. Here are key underlying points that show up consistently. In other words, this is the common ground of our collective human experience at the end of life.

• It is a priority that human beings assist each other as coaches or midwives through the stages of dying. To be proactively involved in the death of another human being is the ultimate act of love. The ancient books of the dying were not just for an esoteric few. There was an overriding desire to disseminate the knowledge of these traditions among average laypersons. And it was essential to include both family and friends throughout the death and dying process.

• There are certain observable and universal patterns or stages in the life-to-death transition process. Human beings have always died in essentially the same way. Our common experience has been documented for millennia. The good news is that these patterns can help us to anticipate and support the various changes that body, mind, and spirit inevitably seem to face in the process of letting go.

• There is a clear relationship between physical and emotional pain. Relieving suffering at the end of life requires a holistic approach that acknowledged both dimensions of body and spirit. There is a difference between healing and curing. It is always possible to be getting well in the midst of serious illness.

• It is necessary first to diagnose spiritual pain before attempting to respond to it. The records of antiquity point to certain universal experiences or names for spiritual pain and suffering. Helping the dying person to identify spiritual pain gives the caregiver important clues as to appropriate means of support.

• A “good death” is defined as our ability to maintain a sense of clear knowing or consciousness at the end of life. Medicine is effective when it controls pain without compromising clarity of consciousness. The unfinished tasks at the end of life often hold the key to spiritual suffering. Other cultures insist that the goal of dying well is to help a person die – con los ojos abiertos, in the Latino tradition, or “with our eyes open,” in the Buddhist tradition.

• Some form of consciousness survives the death of our physical body. What is death? For most of human history death was not the opposite of life, but the opposite of birth. In ancient times, theological language provided the primary answer to this question. Nearly fifteen million Americans who have survived a near-death experience describe similar phenomena, regardless of their belief systems.

• We prepare throughout our lifetime for our dying. Standing before the mystery of death had the same impact on our ancestors as witnessing the mystery of birth. In such a twilight place, it is as if time itself stands still to allow the survivors to reflect on life’s bigger questions. Death has the power to heal because it has the power to put life into perspective and to bring forth life’s important priorities. The art of dying can become the art of living.

See also the previous Wild Reed posts:
• From the Palliative/Spiritual Care Bookshelf – Part I | II | III | IV | V
• Chaplaincy: A Ministry of Welcome
• Interfaith Chaplaincy: Meeting People Where They're At
• Spirituality and the Healthcare Setting
• World Hospice and Palliative Care Day
• Resilience and Hope
• The Calm Before the Storm
• George Yancy on the “Unspoken Reality of Death”
• Arthur Kleinman on the “Soul of Care”
• “Call Upon Those You Love”