I can remember as a little boy in Australia, way back in the early 1970s, entertaining members of my family with, if I do say so myself, a pretty good rendition of Shirley Bassey’s “Big Spender.”

It’s true! I can recall it happening on one occasion in the lounge room of my grandmother’s little house, located in the poor (but always interesting) part of town – that part of Gunnedah built on the flood plains of the Namoi River.

I must have recently seen Shirley Bassey in concert on the telly and was obviously quite taken by the way she swung her hips and buttocks to the saucy Boom! Boom!’s of “Big Spender”’s brass section:

I had no idea, of course, what the words were about, but for days afterwards I enjoyed singing and dancing my own version of the song.*

Although I long ago gave up this little routine, I still think it’s cool that Shirley Bassey – now Dame Shirley Bassey – is still on the scene making her trademark over-the-top music. (Who can forget “This Is My Life,” her cover of the Beatles’ “Something,” and, of course, her James Bond movie themes, “Goldfinger,” “Diamonds Are Forever,” and “Moonraker”?)

Her latest is song is “The Living Tree,” which, coincidently, was a metaphor I recently employed to describe the Catholic Church!

Let me dance.
Let me choose my life.
Let me climb the living tree . . .

* Singing and dancing, that is, until Aunty Fay (my Mum’s half-sister) took me to see relatives from her father’s side of the family and asked me do my little Shirley Bassey routine for them. I remember it was a great dark house, the inhabitants of which were old and feeble in ways I had never seen before. They sat motionless and silent in large 1940s-style lounge chairs. It could have been a scene from a David Lynch film. I froze, and despite all my aunt’s pleadings, remained so for the duration of our visit. I guess that was the end of my stage career!

Interestingly, years later my Mum did a Shirley Bassey “Big Spender” routine for a Rotary Club function! I can recall my brothers and I being invited into my parents’ bedroom to watch Mum rehearse and to offer feedback. I was older by then, maybe ten or eleven, and that wonderful exuberance that I think we all have at a younger age in terms of just being who we are, had already began its retreat into some interior closet.

So I just sat on the bed and watched, not daring to remind anyone of my past connection with the song. It was kinda sad, really. Yet in one way or another, that self-censoring and retreat into “the closet” has, at some point, been the experience of the vast majority of gay people. Thankfully, though, things have and continue to change for gay people.

As for me, I’d now have no hesitation singing and dancing along with “Big Spender,” if the opportunity ever arose and the mood struck me! Only if, though. After all, as Shirley sings on “Big Spender,” I don’t “pop my cork for every man I see!” 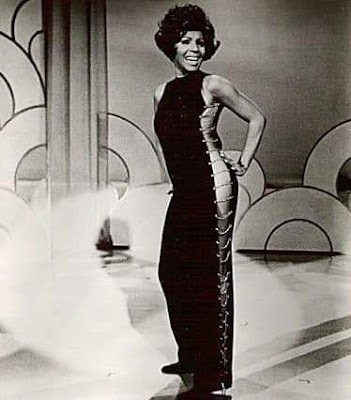 See also the previous Wild Reed posts:
• The Rhythm Divine
• One of These Boys is Not Like the Others
• A Lesson from Play School