That’s the only word I can think of to describe the the plea bargain agreement revealed today in relation to David Hicks – the Australian detainee held for five years without trial at Guantánamo Bay.

Earlier this week, Hicks entered a guilty plea to the charge of providing material support for terrorism. He had originally been accused by the U.S. government of conspiracy to commit murder, conspiracy to engage in acts of terrorism, attempted murder and aiding the enemy. These charges were void, however, when his original trial before a U.S. military commission was canceled in 2006 following the 2004 Supreme Court Hamdi v. Rumsfeld ruling invalidating the constitutionality of the commission process. A second trial was nevertheless set. 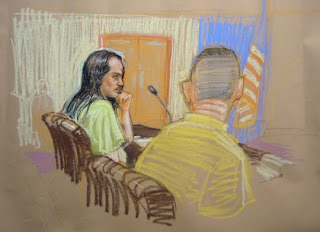 A stretch of David Hicks in the “courtroom” at Guantánamo Bay.
According to his attorneys, Hicks said that he had grown his hair long so as to
pull it over his eyes at night to keep out the light and allow him to sleep.

Richard Philips has observed that, “Hicks is the first prisoner illegally incarcerated in Guantánamo Bay to be brought before a military commission. The vague charge, the commission itself, and Hicks’s guilty plea are all legal travesties, which not only violate the Geneva Conventions but centuries-old basic legal principles.”

According to his father Terry, David Hicks plead guilty in order to get out of the Guantánamo Bay detention center and its terrible conditions, and return home to Australia.

Australian National Party MP Barnaby Joyce notes: “One of the many reasons why the law disapproves of prolonged incarceration without charge or trial is because of the intolerable pressure it places on the accused to plead guilty just to escape detention. . . The only thing that is guilty here is the judicial process under which he was being tried.”

Joyce is one of the few Australian politicians courageous enough to speak out against the moral and legal outrage that is Guantánamo Bay. Politicians may be largely silent, but the Australian people are not. As Richard Philips notes, Joyce is “expressing the sentiments of broad layers of Australians who are appalled at Hicks’s treatment.”

Indeed, in the eyes of most Australians, concerns over Hick’s guilt or innocence have been eclipsed by the fact that he has languished for five years without trial in the hellhole of Guantánamo Bay – often for long periods of solitary confinement.

Now on top of this outrage are the various components of the plea bargain agreement – an agreement that initially was to see Hicks serve a maximum of seven years in an Australia prison. (In just the last few hours it’s been reported that a section of the plea agreement that had been kept secret from the panel of military officers that recommended the seven year sentence, caps the sentence at nine months.)

According to Mark Coultan of the Sydney Morning Herald, Hicks has to “drop any claims of mistreatment by the US government since he was captured in Afghanistan and taken to Guantánamo Bay.” (Hicks had previously alleged that he was beaten, sodomized, and subjected to forced injections while being held by US forces.)

“The plea bargain,” writes Coultan, also includes “a ban on [Hicks] speaking to the media for one year, and agreement that if he made any money from selling his story the money would go to the Australian Government.”

Can you believe this crap? It just goes to show how bad conditions must be at Guantánamo Bay for Hicks to not only plead guilty, but to agree to such outrageous conditions.

I’m not the only one to think this way: “David Hicks would agree to anything to get out of Guantánamo after being trapped there for more than five years,” says Vincent Warren, executive director of the Center for Constitutional Rights. “The government is attempting to silence criticism and keep the facts of their torture and abuse of detainees from the public.”

Noting that Hicks has already outlined his torture and abuse in an affidavit he dictated to his military attorney in 2004, Warren adds, “You can't put torture back in a bottle.”

As an Australian citizen I am appalled at my government’s support of such a shameful plea bargain agreement. I’m also deeply ashamed of my government’s five years of support of the Bush administration’s violation of the legal rights of David Hicks at Guantánamo Bay – a place where hundreds are denied their fundamental right to go to court on a writ of Habeas Corpus, and where, as Richard Philips notes, “fear and intimidation, sensory deprivation and other torture techniques are routine.”

Greetings Comrade!
If you like Habeas Corpus, then you'll LOVE the Ministry of Love! We've been protesting the Military Commissions Act since October. Find out more at http://ministryoflove.wordpress.com
Regards,
O'Brien