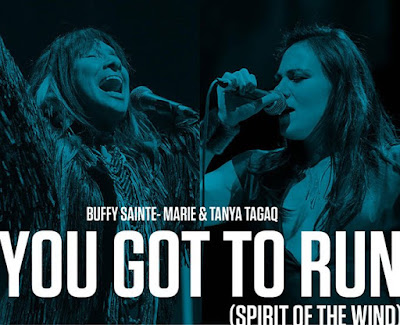 This evening for "music night" at The Wild Reed I share something very special: the recent collaboration of legendary singer-songwriter Buffy Sainte-Marie and Inuk throat singer Tanya Tagaq. Both women are past Polaris Music Prize winners, and the two teamed up to create the new recording “You Got To Run (Spirit Of The Wind)” as part of the second-ever Polaris Collaboration Session. The song debuted online this past Wednesday, February 22 (two days after Buffy's 76th birthday).

Sainte-Marie and Tagaq, who won the Polaris in 2015 and 2014, respectively, collaborated on the Sainte-Marie-written song “You Got To Run (Spirit Of The Wind),” presented by Stingray Music and generously supported by the Canada Council for the Arts. . . . The song was recorded in the fall of 2016 at Orange Lounge in Toronto with producer Jon Levine (Nelly Furtado, K’naan, Drake), and mixed by Howie Beck (Feist, Hannah Georgas, Jason Collett). It was inspired by champion dogsled racer George Attla, who competed in the first-ever Iditarod dog sled race in 1973 and was the subject of the 1979 film, Spirit of the Wind.

Tagaq and Sainte-Marie hope the message of “You Got to Run (Spirit of the Wind)” can affect listeners in a number of inspiring ways.

“It reminded me of growing up in Nunavut,” explains Tagaq. “Sometimes when things get difficult you have to pick yourself up, you can’t let things bring you down. You could take it to be an anti-suicide message. I really appreciate its powerful lyrics.”

Sainte-Marie wouldn’t be opposed to political candidates using it as a theme song.

“There are very important things going on in Indian country right now. This is a song I’d like to hand to any of our Aboriginal candidates who really are in a position, finally, to make a big difference,” said Sainte-Marie.

Inspiring words from both women, to be sure. . . . And I have to say that I love the energy and message of "You Got to Run (Spirit of the Wind)," and how, for me at least, this image of the "spirit of the wind" is all about the Divine Presence within and beyond us. . . . Oh, and I also love Buffy's spirited shout-out to Standing Rock towards the end of the recording!

I hope all who are reading this will enjoy and be inspired by this song too! . . .


. . . Down in a hole, you feel like
two different people in your soul.
You feel like a loser
until you see that as you bend
you learn to be
your own best friend.

Hey, we've been down;
we've been so broken, been so low
that we've kissed the ground.
But you can see yourself a winner
beyond the money and the greed,
beyond the prizes of pure untested need.

And to be a champion is more
than luck and speed.
It's power and freedom
in the spirit of the wind.

Following is an episode of the Polaris Podcast featuring an interview with Buffy and Tanya discussing their collaboration.