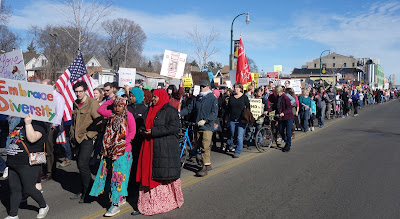 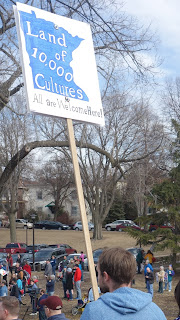 Earlier today my friend Richard and I participated in a solidarity rally and march with and for immigrants and refugees.

Organized by the Twin Cities-based Anti-War Committee and co-sponsored by the No More Deportations Campaign of Minnesota, the event was very inspiring and drew over 2,000 people.

In the lead-up to the march, the Anti-War Committee shared the following via social media.

Join us to demand the end of the Trump administration's racist Muslim ban, to say 'No Wall on the US-Mexico Border,' to demand that Minneapolis and St. Paul remain 'Sanctuary Cities,' and to say 'No New U.S. Wars.' We will rally in Powderhorn Park and then march on Lake Street to send a loud message of solidarity to our immigrant sisters and brothers. We particularly want to show our support to all the families whom are affected by Trump's Muslim ban and by the increasing militarization at the US-Mexico border. . . . No Hate and No Fear! Refugees are Welcome Here! 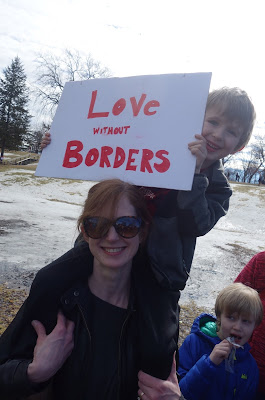 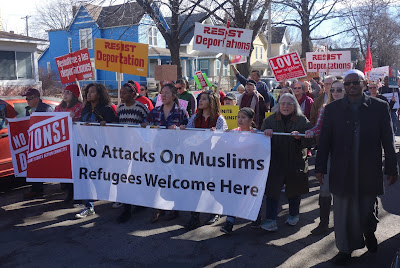 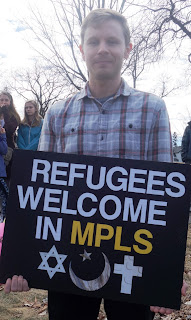 Following is the report from Minnesota Public Radio News on this afternoon's rally and march.

Supporters of refugees and immigrants marched through Minneapolis this afternoon to protest proposals of President Trump.

The march attracted around 1,000 people, according to Minneapolis Police. It started at Powderhorn Park, and traveled along Lake Street between Chicago Avenue and Bloomington Avenue – closing the street at times, before returning to the park.

Protesters carried signs that read "Resist" and "No More Deportations," and chanted as they marched.

They protested Trump's proposed border wall with Mexico and his proposed temporary ban of refugees from seven Muslim-majority countries.

The protest went from 1 p.m. to around 3:30. Minneapolis police report they made no arrests or responded to any calls related to the protest. 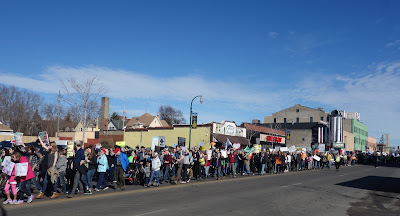 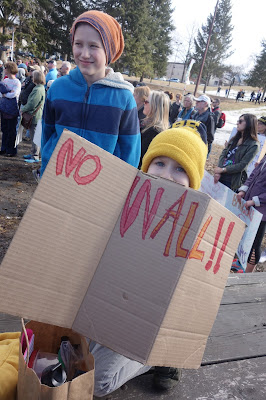 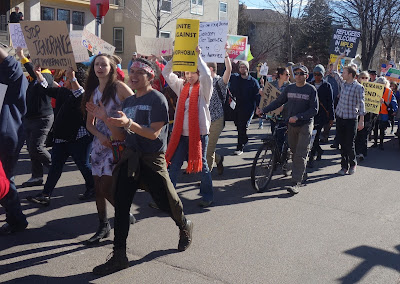 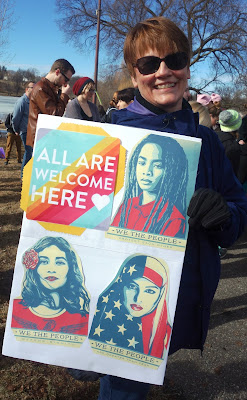 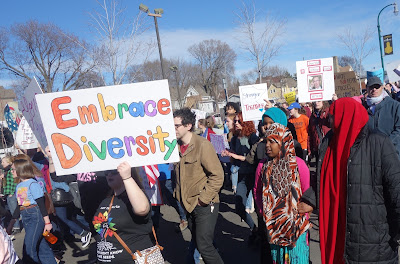 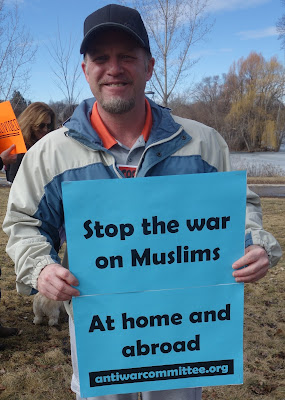 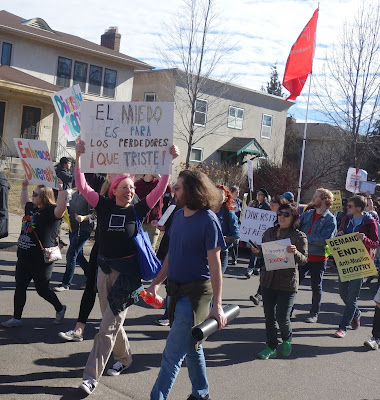 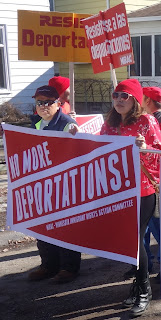 More than 2,000 people marched from Powderhorn Park along E. Lake Street in Minneapolis and back again Saturday afternoon to show support for immigrants and refugees in the face of President Donald Trump’s views and proposals.

The march, organized by the Anti-War Committee and the No More Deportations Campaign, featured speeches, chants and signs in both English and Spanish. A number of causes were represented, but the most prominent was support for refugees and immigrants.

The group of marchers stretched at least two blocks, diverting traffic as they moved onto Lake Street, where they walked past several businesses run by immigrants. The crowd, which was peaceful and enjoying the sunny day, included many families and children, who were asked to march in front.

Sabry Wazwaz, with the Anti-War Committee, led the chants from the bed of a pickup truck, including, “This is what democracy looks like!” and “Together we stand, together we fall. Together we say, ‘No ban, no wall!’”

The march moved west on Lake Street and turned around after reaching the Midtown Global Market near Chicago Avenue. Minneapolis police helped guide the marchers and redirect traffic.

Community members, passers-by and people working in the Lake Street businesses took video of the march on their smartphones, and many chanted along in support.

Heather Cornwell, who lives in southwest Minneapolis, took her 12-year-old daughter, Wendy, to see the marchers along Lake Street. Cornwell adopted Wendy from Colombia last year, and said she wanted her to see the power of unity.

“It’s exciting to see all the voices coming together,” Cornwell said. “I want her to grow up in a country that is supportive of an immigrant culture.”

The Anti-War Committee helped organize a march on Jan. 31 that drew at least 5,000 people to downtown Minneapolis. The large numbers who came out then led the group to organize Saturday’s march, Rowan said.

“It doesn’t end with protests,” she said. “We want people to help with support work for these families that are being attacked right now.”

Last Saturday, more than 2,000 people marched from downtown Minneapolis to the University of Minnesota in another show of support for immigrants and refugees. Similar demonstrations have taken place across the country since Trump’s inauguration. 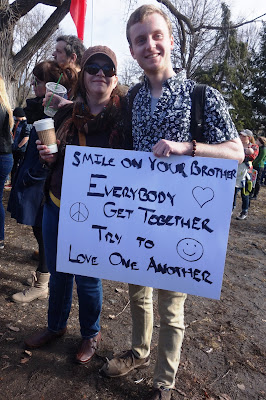 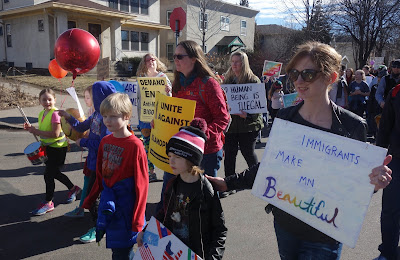 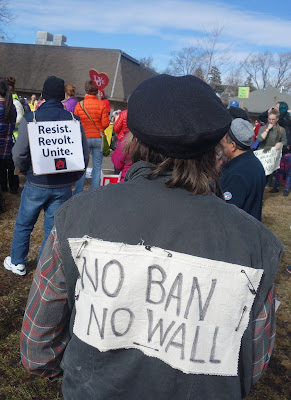 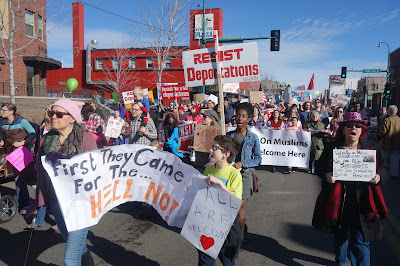 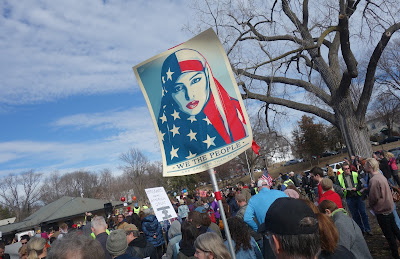 Good work, Michael! Thank you for all you do.

I ran across your blog the other day looking for something else. I stopped to look at it and then bookmarked it because you have written some excellent articles that I want to read. I should mention that I'm a firm atheist and have been since I was a small child. I was the brat who cornered the minister one Sunday after church and demanded to know why he was scaring everyone by telling them they were going to hell when there was no such thing. My insistence that religion was all nonsense didn't make my mother too popular with the congregation. But I digress... I find your writing to be insightful and interesting and I'm looking forward to reading more of it. Keep up the good work. We really really need sane people with a voice these days.

Thanks for stopping by, Jane, and for your encouraging comment. It's greatly appreciated.

Thank you for the beautiful photos and wonderful post. I missed this event as I was teaching all day. So great to see visuals. I heard it was so wonderful from so many people.