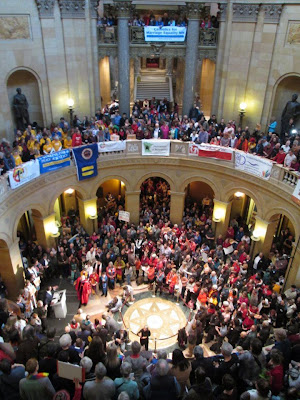 Four years ago MN State Sen. John Marty addressed the 2009 annual community meeting of the Catholic Pastoral Committee on Sexual Minorities and told those in attendance that "we can make it happen." He was referring to marriage equality for all Minnesotan citizens, regardless of sexual orientation. 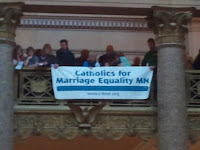 Last Thursday, February 14, was St. Valentine's Day – a perfect day for the annual Freedom to Marry Day rally at the MN State Capitol. This year's rally, organized by Minnesotans United for All Families, saw over 2,000 people gather in the rotunda of the Capitol to show their support for civil marriage rights for same-sex couples. One of the definite highlights of the rally for me was when we unfurled the Catholics for Marriage Equality MN banner from one of the top balconies of the rotunda. I heard a thunderous wave of applause rise up from below, and thought to myself that the first of the rally's speakers must have stepped up to the podium. Looking down I made the wonderful discovery that it wasn't the appearance of a speaker that the crowd was so enthusiastically responding to, but rather the appearance of our banner! 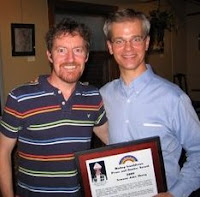 Another highlight was my brief conversation with Sen. John Marty. Upon seeing me, he was quick to tell me that the award CPCSM presented him at our June 2009 annual community meeting (left) was still on his office wall. It clearly meant a lot to him, and, as executive coordinator of CPCSM/Catholics for Marriage Equality MN, I was honored and happy to be reminded of this.

At one point during our conversation last Thursday, John put his hand on my shoulder and said with utter conviction: "It'll be legal August 1st." He was, of course, talking about marriage equality – a justice issue he has been passionate about for as long as I can remember, and which makes him such a worthy recipient of CPCSM's Bishop Gumbleton Peace and Justice Award. And I'm thinking that if anyone knows the inside scoop on the behind-the-scenes political maneuvering and deal-making that is no doubt going on at the State Capitol around this issue, it would be John Marty. Marriage equality legislation is in the works, and, according to Sen. Scott Dibble, another friend and supporter of CPCSM, a bill to legalize same-sex marriage will likely appear this week.

Until then, here's an inspiring commentary that Sen. John Marty recently penned for the newsletter of The Apple Pie Alliance.


The Time for Marriage Equality is Here
by Senator John Marty
February 15, 2013 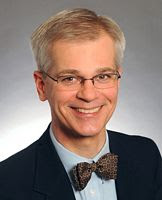 A massive Valentine's Day rally at the Minnesota State Capitol, which included over a hundred clergy and religious leaders calling for the state to allow same-sex couples to marry, is no longer surprising.

Times have changed. In 1997, when the Minnesota legislature passed the Defense of Marriage Act (DOMA), to "defend" marriage against same-sex couples, only a handful of legislators voted against it, and even fewer were willing to speak against it. Back then we received stacks of letters, many filled with hateful comments, condemning us for supporting the right of all people to marry the person they love.

Over time, there has been growing recognition that LGBT families deserve fair treatment. Even the strongest proponents of the constitutional amendment have changed their strategy and rhetoric in response to shifting public opinion. Ten years ago, Michelle Bachmann's legislation would have amended the constitution to ban not only marriages, but also civil unions. Now, less than a decade later, the amendment's authors declined to put a civil union ban in their proposal, knowing how unpopular that would be.

Shortly before the election, a gay TV reporter asked the spokeswoman for Minnesota for Marriage, the pro-amendment group, "How is my relationship less valid than others?" She responded, "[It is] certainly not less valid. . . . We understand that same-sex couples can love each other and commit to each other." This from the spokeswoman leading the fight against marriage equality! That's a huge change.

Opponents of marriage equality often speak of religious “truths” to make their case. My religious faith teaches that we are to treat others the way we would want to be treated. My church, like many others, promotes making a sacred, lifelong bond between couples who love each other. It is because of our faith, not in spite of it, that we promote marriage and work to strengthen families of same-sex couples just as with heterosexual ones. For us, the countless scripture passages on love and commitment, on honesty and fidelity, on compassion and understanding, and on the importance of parents caring for each other and their children are more compelling than the handful of verses that have been used by others to argue against homosexuality.

The religious leaders who came to the Capitol on Valentine's Day asking for marriage equality aren't asking others to share their religious beliefs; they respect the beliefs of those who disagree. They don't want the state to interfere with the religious beliefs of any of its people. Just as a church or religious denomination that objects to same-sex marriage has the right to refuse to solemnize those marriages, a church or religious denomination that believes in the value of same-sex marriage should have the right to solemnize those marriages.

The current law banning marriage doesn't stop same-sex couples from falling in love, from making commitments to each other, from sharing their lives together, from raising children, or from growing old together. Their love and commitment is a wonderful thing and healthy for society. There is no rational reason for denying their families the same rights and responsibilities that other married people have, including the right to pension and Social Security survivor's benefits, the right to family and medical leave, and numerous other benefits and obligations.

Many of these couples have been partners for more than the three decades that my wife Connie and I have been married, yet they still do not receive the same legal protections and rights that we have. They have been waiting for a long time.

I am confident that we will pass marriage equality legislation this session. Some would rather that we postpone the issue for a few years, but justice requires that we provide equality for LGBT families, and that we do so now.

Human rights for any minority should never be subject to popular opinion. Even so, the legislators who believed it should be determined by a statewide vote, got their way. And they lost.

We will pass legislation allowing all Minnesotans to marry the person they love – not because the majority rejected the amendment last fall – but because it is the right thing to do. The point here is that the opponents can no longer claim to have strong backing from the public.

The conversation about marriage equality that began last year in communities around the state helped build understanding of the value of all families. Passing legislation to allow marriage for all couples will not stop this conversation. Year after year, Minnesotans will continue gaining understanding and respect for those who are different from us.

Now, we can act. This year, we will finally give all Minnesotans the freedom to marry the person they love. And that's a beautiful thing. 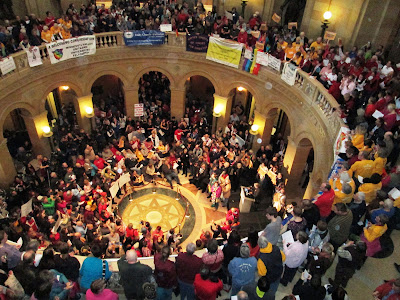 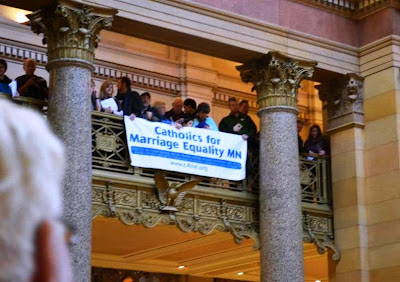