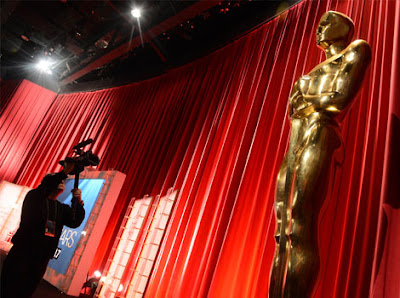 Well, the Oscars have come and gone for another year.

Overall, I thought last night's telecast of the 85th Academy Awards a decidedly mixed-bag. For one thing, the Family Guy humor of Seth MacFarlene wasn't a good match for the occasion (and some are saying for any occasion), although I thought his "Flying Nun" skit with Sally Field was quite funny. 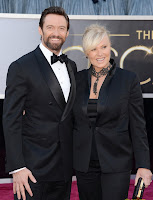 Yes, just Hugh's presence is, in my book, a highlight! And it's not just because his incredibly good-looking and a fellow Australian. No, it's also because he always comes across as a very down-to-earth, sincere, and friendly guy. International stardom appears not to have gone to Hugh Jackman's head, and I think that says something about the integrity of the man.

Jackman, accompanied to last night Oscars by his beautiful wife Deborra-Lee Furness, was nominated for Best Actor in a Leading Role for his work in Les Misérables. He lost out to Daniel Day-Lewis for his portrayal of Abraham Lincoln in Steven Spielberg's Lincoln.

According to JustJared.com, when Jackman appeared on the Red Carpet he was wearing "a Tom Ford tuxedo with a shawl lapel, plisse front cocktail shirt, satin bowtie, silk pocket square, onyx studs and cufflinks and lace up evening shoes." So there!

4. The performance by the Les Misérables cast 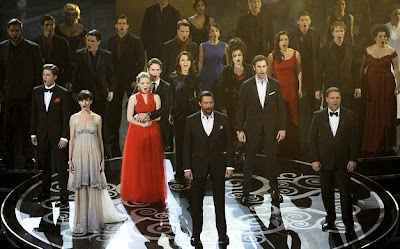 This year's Oscars honored music in film. Wikipedia notes that "the show paid tribute to musicals such as Chicago, Dreamgirls, Les Misérables and [made] references to The Sound of Music and Beauty and the Beast. In addition, numerous film scores from various motion pictures were played intermittently throughout the ceremony; most notable was John Williams' theme music from Jaws, which was used to goad winners off the stage if their acceptance speeches were overly long."

At one point, the cast of Les Misérables, led by Hugh Jackman, performed a stirring medley of songs from the Best Picture-nominated film. Here's how Metro's Ann Lee described the performance:

Jackman, who was nominated for Best Actor for his role as Jean Valjean in the film, took to the stage to sing "Suddenly" before Hathaway launched into "One Day More" and "I Dreamed A Dream."

The pair were then joined by Eddie, Amanda, Samantha, Aaron, Russell, Helena and Sacha for a rousing rendition of "One Day More."

She thanked her husband Adam Shulman in her speech saying: ‘By far and away, the greatest moment of my life is the one when you walked into it. I love you so much.

‘And thank you for this. Here’s hoping that someday in the not too distant future the misfortunes of Fantine will only be found in stories and never in real life.’

The performance was part of a section paying tribute to movie musicals, with Jennifer Hudson performing a song from Dreamgirls while Catherine Zeta-Jones sung "All That Jazz" from Chicago. 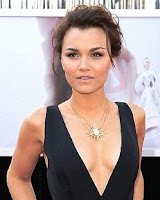 I think it's unfortunate that Samantha Barks, who plays Éponine in Les Misérables, wasn't nominated for Best Supporting Actress. And just think: If she had been, we might have been treated to a performance of her beautiful rendition of "On My Own." 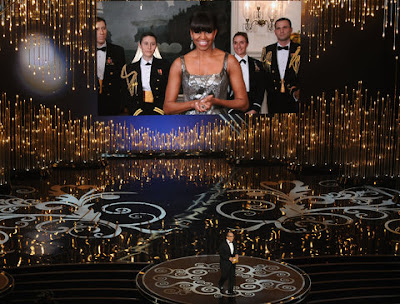 The First Lady of the United States looked stunning when she was beamed in live from the White House to announce Argo the winner of the 2013 Academy Award for Best Picture.

In her surprise appearance, Michelle Obama praised the films nominated by the Academy, saying, that they were movies that "took us back in time and all around the world." She went on to say that:

They made us laugh. They made us weep and made us grip our armrests just a little tighter. They taught us that love can endure against all odds and transform our minds in the most surprising ways. And they reminded us that we can overcome any obstacle if we dig deep enough and fight hard enough and find the courage to believe in ourselves. These lessons apply to all of us, no matter who we are, or what we look like, or where we come from, or who we love. 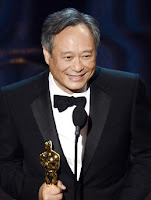 Life of Pi was one of the films I was hoping to win Best Picture. Although it lost to Argo, it did end up winning the most awards for the evening – four. They included Best Cinematography, Best Visual Effects, Best Original Score, and Best Director for Ang Lee.

Until just a few weeks ago — and with Argo director Ben Affleck effectively shut out of the category — Spielberg was presumed to all but have locked up the golden statuette for directing Lincoln.

The outcome mirrored the last time Lee and Spielberg faced off at the Oscars in 2006. Likewise, that year Spielberg went home empty-handed after Munich lost out to Lee's celebrated win for the controversial cowboy romance Brokeback Mountain. 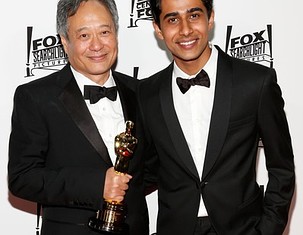 Above: Ang Lee with Suraj Sharman,
who made his acting debut with the title role in Life of Pi. 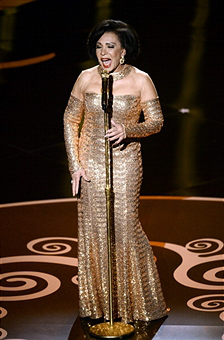 During last night's telecast, the Oscars paid tribute to fifty years of James Bond movies. Without doubt, the highlight of this tribute was the appearance of Dame Shirley Bassey, singer of three classic James Bond themes (including "Diamonds Are Forever" and "Moonraker"). At the Oscars she belted out in true Bassey style the first Bond theme of her career, 1964's "Goldfinger."

To say Bassey brought the house down would be an understatement! But, hey, don't take my word for it. Judge for yourself by watching her performance here.

If British spy James Bond can't be called upon to save the mishandling of pop music by the 2013 Oscars, producers did at least book the next best thing: Shirley Bassey. The vocalist, now in her 70s, has defined what has now become a genre, Bond music. 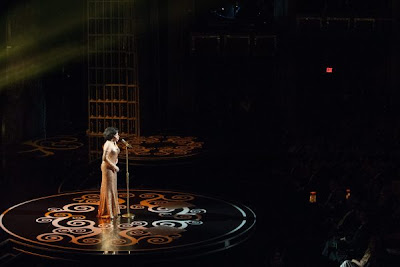 A Bond song must feel royal in its presentation, but also have a hint that something is amiss. Sometimes the booming orchestra can act as a moody foil for its vocalist, and other times the singer can become the antithesis of the Bond-girl seductress. Usually this is achieved by singing with a no-frills coldness. Bassey's Bond songs had all of the above, and her best known, "Goldfinger," as evidenced Sunday night, is at once over-the-top as well as a study in restraint. Its slowly menacing pace is also able to make a cinematic symphony seem fit for a nightclub.

Lyrically, "Goldfinger," as are most Bond songs, can at times be silly, but you wouldn't know there was any funny business happening with Bassey at the helm of the tune. She clasped her stomach, clutched her chest and stood stoically calm in her gold, glittery dress. 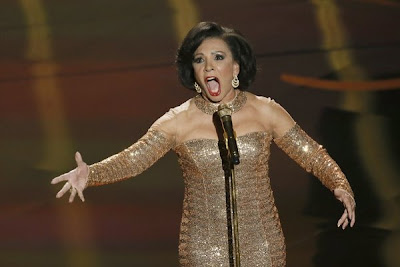 Her voice has lost a little sharpness, but it has still aged into a rather forceful presence, as Bassey spread her arms, and twisted "Goldfinger" into "goldfingahhh," it was as if she believed at this very moment that the money-obsessed villain of "Goldfinger" was a real-life threat. As the orchestra swelled, Bassey's voice remained largely level. She didn't go to the melody, the melody went to her. 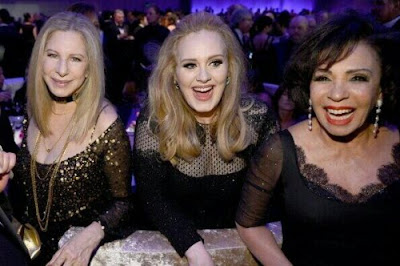