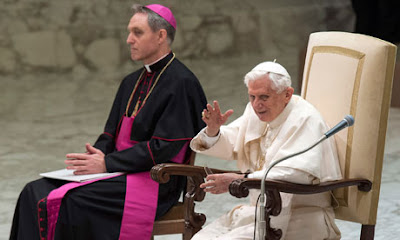 The Associated Press is reporting that "[t]he Vatican has confirmed that Pope Benedict XVI's trusted private secretary will remain as his secretary and live with Benedict in his retirement home in the Vatican gardens – in addition to being prefect of the new pope's household."

According to the AP, "the dual role of Monsignor Georg Gäenswein would seem to bolster concerns expressed privately by some cardinals that Benedict – by living inside the Vatican and having his aide also working for his successor – would continue to exert at least some influence."

Hmmm . . . besides the whole conflict of interest issue that this story highlights, I thought so-called "particular friendships" were discouraged in the Roman Catholic priesthood. Regardless, I'm glad Benedict won't be living alone in his retirement.