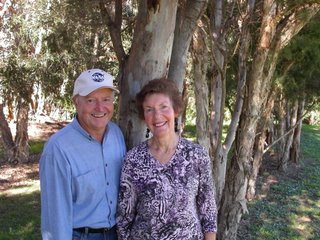 Last month, Brokeback Mountain premièred in my hometown of Gunnedah. At least one resident, Judith Law, found the film objectionable and shared her views via a letter to the town’s newspaper, the Namoi Valley Independent. Another resident, Rebecca Ryan, wrote a supportive letter about the film and the issue of homosexuality.

My parents, now living in Port Macquarie, receive the Namoi Valley Independent via subscription. They chose to respond to the negative reaction to the issue of homosexuality published in the paper in a way that, initially, took me aback.

Don’t get me wrong, I’ve never doubted my parents’ love and support, but their decision to write and have published the type of letter they did has broken new ground with regards their own “coming out” journey as parents of a gay child. They’ve truly joined the ranks of Catholic Rainbow Parents, and are helping the movement go international!

Mum spent many hours drafting the following letter, one which both she and Dad signed and e-mailed last Sunday to the Namoi Valley Independent. It was published two days latter, on Tuesday, June 13.

I’m just so proud and happy that they took the stand they did, and that they’ve already began receiving a number of supportive phone calls from relatives and friends back in Gunnedah.

Informed Understanding of Struggle for Justice

Thank you Rebecca Ryan for your caring words (NVI, May 30 ’06). We would like to take this opportunity to share our family’s experience of homosexuality.

We have three sons who were raised in a loving Christian home. Two of our sons are happily married and have blessed us with six grandchildren. Our middle son, Michael, is gay and has lived in Minneapolis, USA since 1994. He is at present holidaying with us and is happy for us to share with others part of his story.

As a Catholic, Michael had struggled for many years to come to terms with his sexuality. He “came out” to us via a letter in 1996. In part he wrote:

“It’s been one of my biggest regrets and most painful burdens that I haven’t had the courage to date to be honest with those I love the most – namely, both of you and my brothers. I’m really sorry for the hurt that my lack of trust must mean to you. I don’t want us to drift apart. I hope and pray that my writing to you doesn’t cause you great distress or worry. I am who I’ve always been.”

We have all moved on since that memorable day. Michael has taught us so much and we’re grateful that he made the decision to share his life with us. Some children find it too difficult and as a result their lives are shrouded in secrecy and guilt.

Homosexuality is not a “lifestyle” that people choose, it is an “orientation” they are born with. Michael has seen sad situations where gay people have been driven to suicide and where marriages have been entered into in the hope that somehow it will make things “right” or “normal.”

This was evident in the movie Brokeback Mountain. We were touched and saddened by the ending of the movie – the gentleness and acceptance of the mother in contrast to the hostility and hardness of the father.

Promiscuity and irresponsible behaviour is evident in both gay and straight people. This cannot be condoned. Most distressing for us is when it is assumed, by some, that all gays are paedophiles. This is inaccurate.

Michael gained his Masters in Theology from the College of St. Catherine in St. Paul, Minnesota. He is an advocate for gay and lesbian people and their families. He is employed as an educator and events coordinator for the Catholic Pastoral Committee on Sexual Minorities. He is compassionate, caring and is involved in the peace and justice movement.

We love equally each of our children and they continue to provide us with pride and joy. Our family embraces and supports Michael as he continues his struggle for acceptance in a society which doesn’t always have an informed understanding of homosexuality. As a result, we the parents of a gay son have experienced a range of reactions from others. However, we remain hopeful that attitudes will continue to change for the better.

Michael,
Excellent post. You are lucky to have parents who not only love you and continue to love you (as mine do) but also understand what it means to have a gay son without letting their preconceived beliefs (from whatever basis, religious or otherwise) drive continued prejudice. Congrats!

Hi Michael. I am not gay but have gay friends and have seen their struggle with acceptance and equality. It is disappointing that in 2015 marriage is not provided to everyone. Two weeks ago, the same Judith Law you mentioned above wrote a letter to the NVI strongly opposing gay marriage and equality stating gay people and those who are for gay marriage are athiests. I don't know what God she believes in but its certainly not mine.

I wrote a letter to the NVI to counter what she said however the paper did not publish it. I stated facts, she stated crap from the dark ages.

You are not alone and everyone with the exception of the Judith Laws of the world are standing alongside you. God loves everyone.. even Judith.

All the best,
Justin