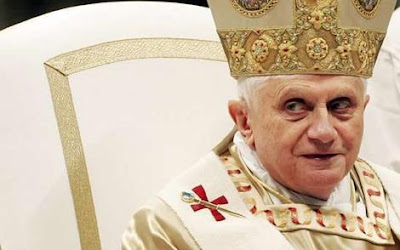 A friend recently brought to my attention an interesting article by Fr. Paul Surlis.

Published in the April 2007 issue of the Irish journal The Furrow, Surlis’ article calls upon Pope Benedict XVI to listen and dialogue with God’s hurting people – women, survivors of clerical sexual abuse, priests who have retired to marry yet who continue to feel called to active ministry, divorced and remarried Catholics, and gay, lesbian, and transgender Catholics.

Following is that part of Fr. Surlis’ article that deals with this latter group of Catholics.

Benedict should listen to gay, lesbian, and transgender Catholics who presumably are around 6% of all Catholics, as they are of the general population. He should reflect on their affirmation that sexual orientation is a discovery not a choice, an insight unknown to biblical writers two and three thousand years ago who assumed that all persons were heterosexual and only the perverse opted for homosexual relationships.

This insight alone invalidates the shaky biblical strictures condemning homosexuality, which have much to do with taboos against non-procreative sexuality when infant mortality was high and a beleaguered Israel needed soldiers and workers for its very survival.

And Benedict would be asked to ponder the fact that slavery is endorsed and even mandated far more strenuously than homosexuality is condemned in the Bible. Yet, today slavery is regarded as intrinsically evil and is everywhere condemned, even if practiced in places. But if such a turnaround of biblical teaching can occur in the area of slavery, why may we not witness a reversal of centuries of misguided condemnations of homosexuality which is increasingly recognized as neither disordered nor sinful when consensually embraced in equal relationships?

Benedict is too good a theologian not to recognize that describing moral rules and strictures that are changeable and are culturally conditioned and have varied over time, as Catholic teaching is misleading both to Catholics and those who are outside the Church but influenced by its positions.

There is a hierarchy of truths in Catholic teaching and these revolve around the good news of the divine mystery communicating a share in divine life to humans through Jesus Christ in the power of the Spirit.


See also the previous Wild Reed posts:
A Catholic’s Prayer for His Fellow Pilgrim, Benedict XVI
Beyond a PC Pope
The Catholic Church and Gays: An Excellent Historical Overview
What the Vatican Can Learn from the X-Men
The Bible and Homosexuality
On Civil Unions and Christian Tradition
Catholic Teaching on Homosexuality: “Complex and Nuanced”
The Many Manifestations of God’s Loving Embrace
The Triumph of Love: An Easter Reflection
Our Catholic “Stonewall Moment”
Celebrating Our Sanctifying Truth
The Many Forms of Courage
What it Means to be Catholic