Michael Morwood on the Divine Presence 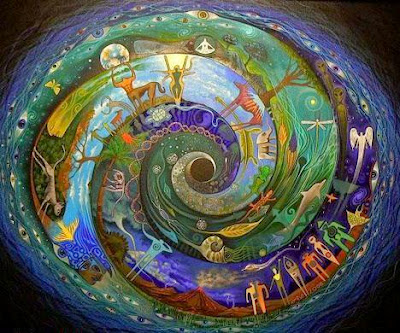 One of the books I'm currently reading is Michael Morwood's It's Time: Challenges to the Doctrine of the Faith, a book that focuses on the crisis of faith confronting Christianity in general and Roman Catholicism in particular. In response to this crisis, Morwood proposes that we discard institutional claims of unique access to a heavenly deity, replace it with a twenty-first century understanding of the Divine Presence permeating the universe, and focus on Jesus as the human expression of that Presence.

I must admit I resonate with much of what Morwood says, and found it interesting that his writings on the Divine Presence mirror my thoughts on prayer as articulated in a number of recent The Wild Reed posts. (See, for example, here and here.)

Following is the first of three excerpts from the chapter of It's Time that focuses on the Divine Presence.

It is time to take seriously what Christianity has always proclaimed: that this Mysterious Presence we call "God" is everywhere and is beyond all our human concepts. It is time to make a significant shift in our understanding of "God." It is time to shift from notions of a deity to an understanding and appreciation of the Divine Presence always here, always and everywhere active in an expanding universe and in the evolution of life on this planet.

While this resistance is understandable, it is lamentable. Christianity has traditionally proclaimed belief in the everywhere presence of God, an everywhere Presence holding and sustaining everything in existence. The shift being proposed here is rooted in fidelity to this belief, in being ready to explore its implications for Christian faith, and most importantly, in the desire to understand the person and message of Jesus in the light of what we know today about our universe, rather than the worldview of two thousand years ago.

The shift starts with considering the age and size of the universe in which we live, and with what it means to say that the Divine Presence is everywhere, holding and sustaining everything in existence. What does it mean to believe that there is no outside of this Presence? And how can we best discern this Mystery present and active in everything that exists?

If this presence is everywhere, "charging" and holding everything in existence, we should be able to discern the Presence through examining how the universe unfolds. It makes eminent sense, then, to go to the scientific world and discover the basic, universal patterns of operation in the emergence and expansion of the universe and in the development of life on earth. These patterns of operation can and should be our contemporary pointers to the Presence. They will point us well beyond the "God" of scripture and doctrine to an awesome Mystery in which we live and move and to which we give human expression.

What is the "big picture" contemporary science paints for us about how the universe expands and develops that would help us discern and appreciate the Divine Presence through all and in all?

See also the previous Wild Reed posts:
• In the Garden of Spirituality – Michael Morwood
• Prayer and the Experience of God in an Ever-Unfolding Universe
• A Return to the Spirit
• The Onward Call