No Place for Dialogue in Archdiocesan Newspaper 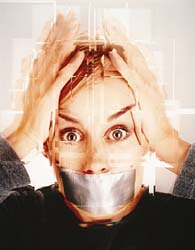 In the November 1 issue of The Catholic Spirit, the official newspaper of the Archdiocese of St. Paul/Minneapolis, editor Joe Towalski discussed what the Church “really teaches” about homosexuality. Towalski’s editorial was in response to the archdiocese’s October 22 decision to prohibit 82-year-old “cradle-Catholic” Robert Curoe and his lesbian daughter Carol from speaking at a CPCSM-sponsored event at St. Frances Cabrini Catholic Church. (To read more about this, click here and here.)

Towalski’s editorial reiterates the official church teaching on the immorality of “homosexual activity,” and reaffirms the catechism’s call for homosexuals to be “accepted with respect, compassion, and sensitivity.” The editorial also directs people to the 1997 U.S. Conference of Catholic Bishop’s statement, Always Our Children – a statement that encourages parents to “accept and love” themselves and their gay son or daughter, and to do all that they can to “urge [their] son or daughter to stay joined to the Catholic faith community.”

As executive coordinator of the 27-year-old Catholic Pastoral Committee on Sexual Minorities (CPCSM), I wrote and submitted a “counter-point commentary” to The Catholic Spirit in response to Towalski’s November 1 editorial. My friend Paula Ruddy submitted a letter-to-the-editor. Neither was published in subsequent issues of the newspaper. Upon inquiring why this was the case, we were informed that it was not possible for The Catholic Spirit to serve as a forum for dialogue around church teachings.

A response to Towalski’s editorial was published, however, in the next issue of The Catholic Spirit. I’ll write about that particular response in my next post to The Wild Reed. For now, though, I’ll simply share my unpublished commentary and Paula’s unpublished letter.

In his November 1 editorial, Joe Towalski notes that homosexuality is a “hot button issue for the church,” yet he does not say why this is the case.

I’d like to suggest that one reason why many issues related to human sexuality remain controversial is because the majority of Catholics intuitively sense that the teachings of the church about these issues lack credibility. The reason for this is simple: the laity has had no part in shaping these teachings.

The belief that the laity should be consulted in matters of doctrine, especially when teachings concern their lives intimately, is part of Catholicism’s rich heritage. For instance, the great English theologian, Cardinal John Henry Newman (1801-90) wrote that: “The body of the faithful is one of the witnesses to the fact of the tradition of revealed doctrine, and . . . their consensus through Christendom is the voice of the Infallible Church.”

With regards to the issue of homosexuality, the “body of the faithful” is still very much engaged in the journey towards “consensus.” And in other areas, the consensus that has been reached is at odds with the teaching of the hierarchical church. For instance, even the US Conference of Catholic Bishops concedes that 96 percent of married Catholics use birth control. Clearly, the church’s teachings on a range of sexual issues are not set in stone.

This shouldn’t be at all surprising, for as Jesuit Philip Endean reminds us: “Dogmas of tradition exist not as truths complete in themselves, but rather as resources for helping us discover the ever greater glory . . . of the God whose gift of self pervades all possible experience.” And, whether we like it or not, “all possible experience” includes gay people’s experiences of love, intimacy, and relationship.

The reality is that gay people can and do experience sexual relationships marked by justice, wholeness, and life-giving love. Shouldn’t such experiences be considered as sources in the ongoing formulation of church teaching on homosexuality? And if not, why not? What exactly are the sources of the Church’s teaching on homosexuality? Shouldn’t such sources include the findings of science and people’s experience?

These are the types of questions that many Catholics are asking. They are legitimate questions with important theological and pastoral implications. Yet sadly, the “official” church response to such questions is woefully inadequate. It’s simply not good enough to say, “Well, this is how it’s always been, so it must be right,” especially since it’s clear that the basis of “what it’s always been” has been informed by limited sources from bygone eras.

And when we limit our sources, we limit and obstruct God’s wise and loving outreach to us – and end up with limited and impoverished church teachings. As Catholics we can do better.

Two points: First, the bishops’ moral teachings are not infallible and have changed significantly over the years. Unlike disciplinary rules, the bishops can’t just declare sexual relations to be sinful on their authority. They have to have reasons. Towalski does not go into the theory of human sexuality underlying the teaching. In The Human Core of Spirituality, (SUNY, 1996), Daniel Helminiak shows that reducing the purposes of sex to procreation robs it of its most human dimension, the spiritual. It would be wise of the bishops to enter into dialogue about human sexuality with the scientific and philosophical communities rather than to insist on a closed set of pronouncements.

Second, it doesn’t take a scientist or a philosopher to see the fallacy in calling the bishops’ teaching a loving one when people are denied participation in such a basic need of human life as sexual expression. Moreover, there is daily evidence of the suffering caused by the rejection of people in an essential aspect of their personhood. It is a violence to them.

For these two reasons many of the Catholic faithful reject the teaching of the hierarchy on this matter. We don’t believe that committed homosexual relationships are per se sinful. I admire the hierarchy’s determination to strengthen family life, but condemning committed relationships of homosexuals is counterproductive and cruel.

I don't know if it is the intent of either Paula Ruddy or Michael Bayly to keep me in the Church as a loyal Catholic but in fact that's what their comments on Archbishop Nienstedt's unfortunate lapse in judgement does for me. It assures me that knowledgeable Catholics can use their common sense without leaving the Church.