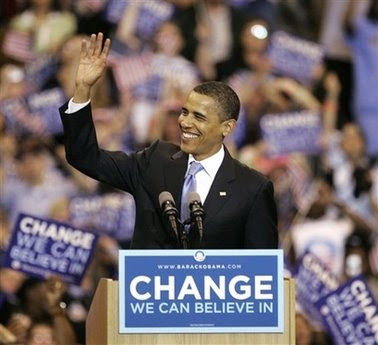 It was a BIG night in St. Paul last night as Barack Obama made history by declaring himself the Democratic presidential nominee and becoming the first black candidate to lead a major party into the November election. 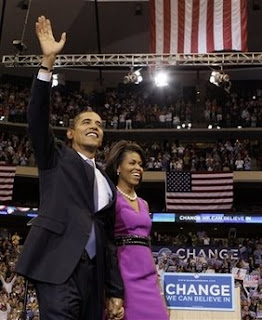 Over twenty thousand people packed the Xcel Energy Center in downtown St. Paul to welcome Barak and his wife, Michelle, to the city and to hear him declare victory.

“Tonight, after fifty-four hard-fought contests, our primary season has finally come to an end,” he told the raucous crowd. “Tonight, I can stand before you and say that I will be the Democratic nominee for president of the United States.”

At this news, the crowd inside the arena went wild – as did the additional 20,000+ supporters on the streets outside the venue.

At one point in his speech, Obama directed his words beyond the Xcel Energy Center to a national audience: “America,” he declared, “this is our moment.”

Not being a U.S. citizen, I can’t vote this November. But if I could I’d cast my vote for Barack Obama. He’s not perfect, I know. What politician is? Yet my hope is that, given his long history as a community organizer, he will commit to infusing grassroots ideas, people, and strategies into a Washington, D.C. clogged with special interests of the unfettered capitalistic variety. For too long such interests have decimated the social fabric of this nation - and the world. People everywhere are hungering for positive change in U.S. domestic and foreign policy. And I believe the best hope for such change is with Barack Obama. 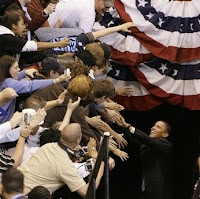 Of course, the history-making aspect of Obama’s candidacy is also very inspiring and exciting. As Rep. Keith Ellison, D-Minn, has said: “It’s a huge thing. Our country is a country that for two-and-a-half centuries had Africans as chattel slavery and a century after that had Jim Crow. . . . America as a country keeps on getting better.”

And with Obama as president, I think America will keep “getting better” for all Americans - gay Americans included. Take for instance Obama’s response to the Human Rights Campaign’s concern about his understanding of the issues facing the lesbian, gay, bisexual, and transgender (LGBT) community:

Throughout my adult life I have been committed to promoting social justice and civil rights. . . . One of the tasks we set out for in embarking on this presidential campaign was to continue the long march of those who came before us, a march for a more just, more equal, more free, more caring, and more prosperous America. I view the issues facing the LGBT community as part of that long march. To me, ensuring that LGBT relationships receive recognition by the federal government, making sure that LGBT citizens are not discriminated against at the job, providing for hate crimes legislation or insisting that our military permit able and willing LGBT Americans to serve openly - these are all issues that speak to the need to further eradicate inequality and hate from our society. I am firmly committed to that cause, and my own experiences as an African American, as a civil rights lawyer, as someone who has taught the Constitution, and as someone who has gay friends, colleagues, and staffers all serve to reinforce that commitment.

I considered going to the Xcel Energy Center last night, but opted instead to keep working on finalizing the June issue of The Progressive Catholic Voice (scheduled for publication later this week). My friend Mary Lynn, however, did attend - along with fellow Rainbow Catholic Parent, Jean.

It was rockin’ and rollin’ in the Xcel Energy Center last night!

You couldn’t tell from the television coverage that I saw later how LOUD it was in there. The fans went berserk when Barack announced he was the official candidate - which he found out only 10 minutes before he went on stage. 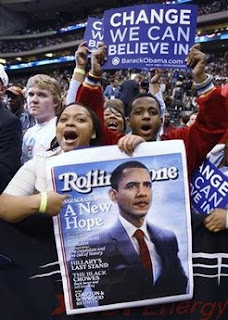 There was lots of James Brown and Springsteen blazing away. More diversity than I have ever encountered in St. Paul, of course. Even standing in line outside was a real happening. People were dashing into liquor stores and passing out champagne to everyone around them . . . cops were too busy to care. People bonded into little cadres of political discussions, cell phones constantly in use to check out returns, kids hawking Obama buttons and T-shirts that they whipped up in their basements, teenagers passing out anti-war literature, etc. . . . lots of whooping and hollering. It was a real Woodstock style love-in. Must have been nice for black people to look out over a sea of humanity and know that at least for this one time, in this one place, everybody was on the same team. It was palpable in the personal exchanges and it felt really good.

Despite the frenzy inside the building, I felt so peaceful and satisfied, if only for that one small moment. Wouldn’t it be nice if this was really the beginning of some sort of new day.

Either way, I always wanted to be in one of those hysterical throngs shouting “OBAMA” or “YES, WE CAN” at the top of my lungs. Last night, the best of all nights, I was finally able to do that. 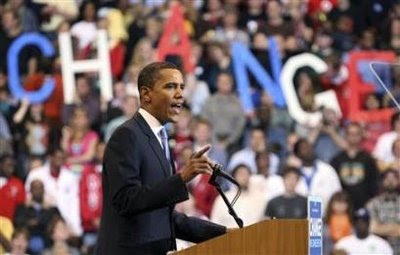 I was so excited, I finally ordered my bumper sticker last night.

I do have one prayer for all candidates for office, especially high office and especially Mr. Obama: Lord, please keep them safe. Give all skill and support those charged with the safety of those in public positions. Lord, please settle the hearts of those with the least tendency towards any potentially rash or violent behavior. We don't need it. Lord, please protect and give us all hearts, minds and actions to protect everyone, from the greatest to (most especially) the least. Amen.