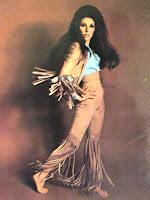 For 'music night' this evening at The Wild Reed I share a track from revered singer-songwriter Bobbie Gentry's 1971 album Patchwork. It's "Somebody Like Me," about which one commentator has observed: "The great Bobbie﻿ Gentry takes a page from Motown and burns rubber in the recording studio." Indeed!

Below is the audio of "Somebody Like Me," courtesy of "tenda berry" and YouTube. It's followed by excerpts from an appreciation of Patchwork written by John Dowler for Raven Records' 2007 CD release containing both this album and Gentry's previous album Fancy. 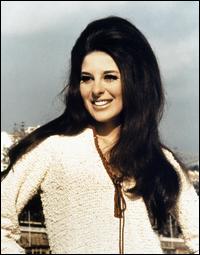 After a couple of years treading water creatively, during which she released two albums containing only three original compositions between them, Bobbie Gentry determined to up the ante with the release of Patchwork in 1971. Completely self-composed and self-produced, the album was a song cycle with the component tracks linked by a series of orchestral interludes, enabling it to be viewed and listened to as a seamless whole.

In much the same way as author Ray Bradbury used the tattooed body of a man as a device to shape a disparate collection of stories into a unified work in The Illustrated Man, Gentry utilised the panels of fabric in a patchwork skirt to provide the unifying principle for a diverse collection of songs. It was a creative conceit that would facilitate the production of what is undoubtedly her most sustained artistic statement. . . . [The track] "Somebody Like Me," a Motown-flavoured slice of rhythm and blues, neatly showcases Gentry's easy facility with the genre . . .

I kind of liked her too... Billy Joe - jumped off the Tallahasie bridge - I can't spell - but the song comes to mind quite often for some reason. I only sing it to my cat however.

Ode to Billy Joe is an excellent song. My friend, and I listened to it yesterday, actually, and we decided they threw their unwanted fetus off the bridge. That's why Billy Joe commits suicide. Gross, ahead of it's time, yet entertaining.

Yeah, I've heard that theory about what is thrown off the Tallahatchie Bridge but it's never quite worked for me.

In the movie version of the song 'Ode to Billie Joe,' it's a doll that's dropped from the bridge, symbolic of the young female narrator's loss of innocence. This loss of innocence is related to the revelation that her would-be boyfriend, Billie Joe, actually enjoyed the sexual advances of his sawmill boss, Dewey Barksdale. That's why he ultimately jumps off the bridge: he cannot deal with his emerging homosexuality. This take on the events of the song/movie is also "ahead of it's time"!

Thank you for putting my comment about Bobbie and Motown in quotes. This exceptional album ,PatchWork, faced an uphill battle at Capitol Records. In the late 80's an a&r man for the label gave me a vivid account about how some worked to destroy the commercial viability of this recording.Tactics included destroying expensive promotional materials that were suppose to go to radio stations and record stores and even shifting sales to other artists in accounting. It seems the "boys club" felt threatened by a female artist who had the audacity to write and produce an entire project in the early 1970's. Bobbie Gentry's recording career was put on the back burner after the sluggish sales of this expensive project in favor of a high profile career as a top notch Vegas entertainer. She would remain a major star for another decade without hit singles, retiring shortly after the birth of her son, Tyler.