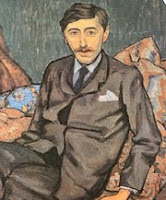 It’s a fascinating review of what sounds like a compelling biography. It’s also a review that's reprinted in its entirety below – with added links. Enjoy.

Novelist E.M. Forster specialized in the “underdeveloped heart.”
A new biography illuminates his own. 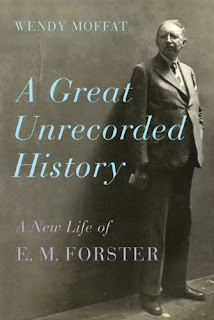 The novelist E.M. Forster lived to the great old age of 91, but by the cultural calendar, his life was even longer. He was born in the starchy days of high-collar Victorian England and died in the Age of Aquarius. In A Great Unrecorded History (Farrar, Straus & Giroux; 404 pages) – the first biography of Forster to be ordered around his cloistered homosexuality – Wendy Moffat pulls out another social yardstick: a schoolboy when Oscar Wilde was imprisoned for “gross indecency,” Forster witnessed the telecast of the first moon landing with his friend Christopher Isherwood in the studio of Mark Lancaster, a former Warhol Factory hand who was one of two men shown lock-lipped in the pop artist’s 1964 film Kiss. (Watching Neil Armstrong step onto the lunar surface, Forster muttered, “I don’t think they should be doing that.”)

It isn’t just the length of Forster’s career that has attracted biographers but also its mesmerizing loopsidedness. Four of the five novels he published during his lifetime, including the now classic A Room with a View (1908) and Howards End (1910), appeared before his 31st birthday and before World War I sapped dry the raw material that fed his fiction: the social and emotional landscapes of Edwardian England. “All that I cared for in civilization has gone forever,” he wrote a friend in 1915, “and I am trying to live without either hopes or fears – not an easy job, but one keeps going on some how.” His masterpiece A Passage to India appeared in 1924, but it was as much a farewell to the form as a triumphant return. He filled the next 46 years with biographies, travelogues, radio broadcasts and criticism, but he seemed to have given up on the novel. Until 1971, that is, the year after his death, when Maurice, the book he’d kept under wraps for six decades – “the first homosexual love story with a happy ending,” the American writer Glenway Wescott called it – appeared, shining a partial light on the path Forster flirted with but abandoned.

Despite periodic cajoling from friends who had seen the manuscript, Forster wouldn’t permit Maurice’s publication during his lifetime. When J.R. Ackerley argued that he should follow the example of André Gide and his frankly homosexual memoirs, Forster answered, “But Gide hasn’t got a mother!” For Moffat, Forster’s friends’ plea missed the point: “The kind of fiction writing he wished to pursue cut him off from his audience, and he rechanneled his pen, writing for his own ear, for his friends, and for the more charitable future he had imagined in his dedication to Maurice.” (It was inscribed “to a happier year.”)

Moffat pays diligent attention to who those friends were, whether in snobbish Bloomsbury or austere Cambridge. If not exactly a father figure, Forster became a sort of avuncular guest of honor among successive generations of gay artists and writers – from poet Constantine Cavafy to composer Benjamin Britten – and in various gay scenes, including, surprisingly, that of late-1940s Greenwich Village. While many of the biographical details are familiar, Moffat amplifies Forster’s story with his words, scavenged from previously unavailable diaries. They record a life choked off by a cosseted upbringing and survey the same unhappy prospects of the “underdeveloped heart” Forster captured in his prose. His decades-long companionship with a married policeman named Bob Buckingham could have come directly out of his fiction: it was an extended essay in love muddled by social restrictions and the limits of human connection.

Moffat isn’t gossipy or reductive – the Forster who emerges from her work is a more human and satisfying figure than we’ve known. She portrays a limited man in full whose compromises between sense and sensibility parallel those of his most complex fictional characters. If his reticence tempers her quietly laudatory picture – the novelist who lightly but assuredly sketched the deadweight of social class in Howards End and colonial power in A Passage to India balked at doing the same with a homosexually themed story “until my death and England’s” – Moffat’s biography gives a new twist on the most over-quoted line Forster ever wrote. “Only connect the prose and the passion” was not just a sermonizing bit of novelistic intrusion but the novelist’s always elusive ideal.