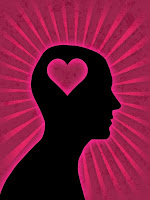 Last month the Minneapolis Star Tribune reported that Archbishop John Nienstedt had instructed the priests of the Archdiocese to establish special committees in their parishes to rally support for next November's "marriage amendment" ballot initiative. In response to this development I submitted the op-ed reprinted below, one which the Star Tribune declined to publish.

The paper did, however, publish a number of letters-to-the-editor and an online piece by Kevin Winge entitled "On This Issue, Archbishop, You Are Wrong." All these pieces were what some might call heart-based responses. Winge, for instance, stated, "I’m not a member of the clergy and I’m not a theologian, but I know [the Archbishop is] wrong because I know what’s in my heart; and what is in my heart is love."

I have no problem with these types of responses as, without doubt, they can reflect important truths. Yet I also believe that intellectually-based perspectives can also reflect truth. It's also important to remember that not everyone is convinced by a "because my heart tells me" argument. Some are actually turned off by overly emotional responses, and, rightly or wrongly, dismiss them as irrational.

It's also problematic when emotionally-based responses are pitted against intellectual ones as if they're automatically superior and/or the only way to respond to them. There can be an anti-intellectual bias in how we choose to respond to the intellectual arguments of others. I'm not saying that this is what the editors of the Star Tribune are exhibiting, but they definitely seem hesitant to facilitate an intellectually-based religious debate. They seem content instead to pit the Archbishop's heady arguments against the supporters of marriage equality's more heart-based ones. This is, however, a simplistic and ultimately unhelpful caricaturing of the two sides of this particular issue.

I strongly believe that as well as responding from the heart to the Archbishop's opposition to marriage equality, we can and should passionately critique and challenge it on its own terms, i.e., intellectually and theologically. I think it's this passion that can tap into the power of the heart and, in turn, help produce a response that integrates both head and heart. It's this type of integrated response that I attempt to make in the following op-ed.

Archbishop Just One of Many Catholic Voices
in Gay Marriage Debate


Not all Catholics support Archbishop John Nienstedt's and the Minnesota Catholic Conference of Bishops’ aggressive support of the proposed “marriage amendment” to the Minnesota State Constitution. Indeed, according to recent findings of the Public Religion Research Center, “Catholics are more supportive of legal recognitions of same-sex relationships than members of any other Christian tradition and Americans overall.”

Unlike the bishops, U.S. Catholics recognize and respect that in a pluralistic society such as ours, the Roman Catholic hierarchy should not be expending time and resources imposing its understanding of sexuality and marriage onto wider society. This is especially true when one acknowledges that the bishops’ understanding of these realities is out-of-step with the collective wisdom of the Catholic people. On issues relating to the intimate lives of heterosexuals (such as contraception) and homosexuals (civil marriage rights) the Catholic faithful have clearly moved beyond the hierarchy’s limited understanding of sexuality.

My sense is that the Catholic faithful are not, in theory, opposed to the bishops making statements on important social issues. After all, in the Catholic tradition the bishops collectively comprise one of the church’s three sources (or magisteria) of truth. However, the teachings they articulate must be reasonable. In other words, they must be informed by and in constant dialogue with the church’s other two sources of truth, namely the insights of Catholic theologians and the wisdom of the Catholic people (the sensus fidelium). Yet on issues relating to sexuality, the bishops tragically abandoned such dialogue years ago. As a result, official church pronouncements on sexuality are woefully impoverished and disturbingly fixated on specific sex acts rather than on the relational quality of consensual adult partnering. The bishops have forgotten that truth (including the truth of human sexuality) is discovered through time, and that tradition (including the tradition of marriage) evolves. Thankfully, the Catholic people have not forgotten these liberating hallmarks of our living Catholic faith. Accordingly, we not only respectfully listen to and consider what the hierarchy says, but also seek out the wisdom of theologians and our own and others’ lived experiences. All need to be prayerfully considered if we are to make an informed and authentically Catholic response.

It is also important to remember that in the past, when the bishops have weighed in on social issues such as racism and immigrant rights, they did so in order to reduce discrimination and expand the circle of acceptance and inclusion in our society. This is not the case with their activism around marriage equality. Indeed, they are advocating the exact opposite: discrimination and exclusion. For many Catholics this is a blatant and grievous betrayal – not only of Catholicism’s rich social justice tradition, but of the very way of being Catholic in the world. This “way” reflects the way of Jesus and is always seeking to discern and celebrate God’s presence in the lives and experiences of all. Many Catholics want their bishops to embody this way and to stand boldly for the principles of justice, compassion, equality, and inclusion. Yet when it comes to gay people, gay lives, and gay relationships, the bishops have chosen not to embody these Gospel principles in their words and actions. For many Catholics this is both painful and scandalous.

No doubt some parishes will follow the Archbishop’s recent directive and establish committees to rally support for the “marriage amendment.” They are free to do so. I hope, however, that they and others will take the time to be open to other Catholic perspectives on this issue. A good place to start is with the video series recently produced by Catholics for Marriage Equality MN and premiered last month at the Riverview Theater. It features local gay and lesbian Catholics and their loved ones sharing their perspectives on faith, family and marriage. This and other helpful resources can be viewed at www.c4me.org.

Michael Bayly is the executive coordinator of Catholics for Marriage Equality MN.


See also the previous Wild Reed posts:
Progressive Perspectives on Archbishop Nienstedt's Anti-Gay Activism
Dialoguing with the Archbishop on Natural Law
Quote of the Day – October 7, 2011
Joseph O'Leary Responds to Carson Holloway's Arguments Against Gay Marriage
Responding to Bishop Tobin's Remarks on Gay Marriage
Catholic Attitudes on Gay and Lesbian: An Overview
Tips on Speaking as a Catholic in Support of Marriage Equality
Marriage Equality: Simple Answers to NOM's Complicated Lies
A Message for NOM (and the Catholic Hierarchy)
At UST, a Rousing and Very Catholic Show of Support for Marriage Equality