A Catholic Rationale for Opposing the "Marriage Amendment" 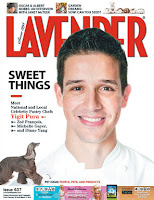 I have an op-ed published in the latest issue of Lavender, "Minnesota's GLBT magazine." Along with two other local faith leaders (David Weiss and Rabbi Melissa B. Simon) I was asked to write about what inspires me to oppose the "marriage amendment." Although I'm grateful that Lavender published my piece, they grammatically butchered part of it! As a writer, I must admit I find that rather annoying! Anyway, following is the original version I sent them.

The Catholic Church’s rich tradition of social justice, a tradition rooted in the radical hospitality of Jesus, leads me to oppose the MN marriage amendment. Throughout history there are many examples of Catholics – including bishops – powerfully speaking out on social issues such as racism and immigrant rights. Traditionally, such speaking out has sought to reduce discrimination and expand the circle of acceptance and inclusion in our society. Yet this is not the case with the Minnesota bishops’ current activism around marriage equality. In fact, they are advocating the exact opposite: discrimination and exclusion.

For many Catholics this is a blatant and grievous betrayal – not only of Catholicism’s rich social justice tradition, but of the very way of being Catholic in the world. This “way” reflects the way of Jesus and is not about unquestioning obedience to the church hierarchy but about discerning and celebrating God’s presence in the lives and experiences of all. The bishops have forgotten this hallmark of the faith, but the Catholic people have not. It’s not surprising, then, that credible polls show that the majority of Catholics support civil rights for gay people – including civil marriage rights. Such support reflects the Catholic faith’s emphasis on compassion, justice, family, truth-telling and love. Like people of faith from a range of religious traditions, Catholics have witnessed these qualities and values in the lives and relationships of LGBT people. Our challenge now is to go out and share with others what we’ve witnessed. Such sharing will contribute greatly to the defeat of the amendment.

Michael Bayly is the executive coordinator of Catholics for Marriage Equality MN and the author of Creating Safe Environments for LGBT Students: A Catholic Schools Perspective. His blog, The Wild Reed, offers thoughts and reflections from a progressive, gay, Catholic perspective.

Amen, Michael. This sentence says it so perfectly: "This 'way' reflects the way of Jesus and is not about unquestioning obedience to the church hierarchy but about discerning and celebrating God’s presence in the lives and experiences of all."

I must say this, Michael, but those polls you regularly point to to justify your argument ask people who identify as Catholics, not people who actually practice Catholicism. My mom says she is Catholic, but she's been to about 10 Masses (all weddings/funerals) in 35 years and is not even sure God exists. So polls of these "Catholics" showing support for gay marriage are not good indicators of what the "Catholic people" support. Why not cite polls of actual practicing Catholics?

And, of course, polls mean nothing when deciding on Church teaching. We aren't a political party re-crafting our platform every four years.

As for our bishops, they can't be called arrogant for deciding to follow what's always been taught and believed for two millennia. Even in 2012 America there isn't a cultural consensus on the subject; the Church doesn't change to the latest fashions on a whim. Not to mention that in the vast majority of the world in which the Catholic Church operates, the cultural consensus is decidedly against homosexuality. So the "Catholic people" both past and present are not with you.

With all respect, James, how do you know if these people who respond to these polls are "practicing" Catholics or not?

And what does "practicing Catholic" actually mean and who gets to define it?

The idea that a "real" Catholic is someone who simply turns up to Mass each Sunday doesn't cut it. How about the way they embody Christ in their lives and treat other people? Surely that's a truer indicator of our relationship with God.

Also, the hierarchy has no problem including those who "identify" as Catholic when they count the total number of Catholics. It would seem they are happy to include them when they want to tout the church's numbers but exclude them when they don't want to hear perspectives that speak to the need or even possibility of reform.

The perspective of Catholics taken via polls do actually mean something. To say otherwise is to deny the very Catholic idea of needing to "read the signs of the times" and the related understanding of the sensus fidelium, the 'sense of the faithful.'

Finally, if we're going to take account of the Catholic people throughout all time and history, then there's no doubt quite a few issues and practices now accepted by modern day folks that would be in the minority -- the role of women, the denouncement of slavery, the charging of interest, etc.

The bottom line is that our understanding of human sexuality is evolving. It's not what it was. We know more now about its complexity and diversity than we ever did before. Our theology and our church teaching should reflect this development. It's inadequate and, quite frankly, rather callous to simply say, 'Well, we've thought this way for thousands of years so we can't change.' I'm sorry, but that's not good enough. And given the realities of the situation, it's a stance that conveys fear, a lack of trust and compassion, unreasonableness and intellectual dishonesty.

We can and should do better.