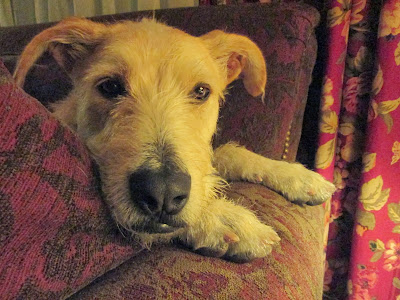 This is Eddie. He's what his primary human companions and I call "the wonder dog."  He's a very sweet and intelligent creature, and I feel very fortunate to have him and two other dogs – Quinn and Charlie – in my life. 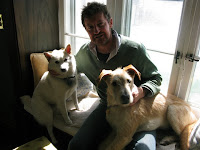 Since first getting to know each other about four years ago, the three dogs and I have developed a very special bond. Friends have observed and remarked on this, and on the different ways the dogs express it. For instance, whenever I visit the home of my friends where the three dogs live, Quinn makes a special bark made at no other time. And Eddie always expresses a sorrowful whimper and follows me to the door whenever I leave to go home.

I've mentioned previously that I believe we are in the midst of a major paradigm shift. At its root, this shift is an expansion in consciousness, in the way we as humans relate to ourselves, to one another, and to all aspects of creation. As a spiritual seeker, I believe that it is Sacred Mystery, the loving and transforming presence at the heart of all, that is awakening us to this shift and sustaining us in our efforts to embody it – individually and collective – in all our actions of body, speech, and mind.

Our embodiment of such actions are changing the way we think about and relate to non-human animals. Of course, this change has been taking place for years, but lately it's been getting some, shall we say, "mainstream" attention. For instance, journalist Mark Bekoff recently spoke to Psychology Today contributor and Emory University neuroeconomics professor Gregory Berns about the findings from a unique research project that Berns initiated called the Dog Project. Berns shares these findings in more detail in a recent essay in the New York Times called "Dogs Are People, Too" and in his new book, How Dogs Love Us: A Neuroscientist and His Adopted Dog Decode the Canine Brain (New Harvest, 2013). The gist of Bern's findings is that in terms of emotions, dogs and humans show striking similarities – something that's not in the least bit surprising to me! (Hence the title of this post!)

Following are some of Mark Bekoff's thoughts after interviewing Professor Gregory Berns.


A paradigm shift is in the works. We can no longer hide from the scientific evidence. All in all, dogs and humans show striking similarities in the activity of an important brain region called the caudate nucleus. So, do dogs love us and miss us when we're gone? The data strongly suggest they do. And, those data can further move humanity away from simplistic, reductionist, behaviorist explanations of animal behavior and animal emotions and also be used to protect dogs and other animals from being abused. Right now, animals are legally considered to be property, just like a backpack or bicycle.

To quote Professor Berns: "But now, by using the MRI to push away the limitations of behaviorism, we can no longer hide from the evidence. Dogs, and probably many other animals, especially our closest primate relatives, seem to have emotions just like us. And this means we must reconsider their treatment as property. . . . Perhaps someday we may see a case arguing for a dog's rights based on brain-imaging findings." I'm sure society will as these data greatly expand what people know about the minds of other animals.

I'd argue that Berns could have made a stronger statement and not used the phrase "seem to," because available data clearly show that many other animals have very rich and deep emotional lives and that the question at hand is why did emotions evolve — and what are they good for — rather than if they've evolved. Furthermore, while some critics of Berns's work feel that he is suggesting that prior to his studies researchers didn't really know if other animals were smart and emotional beings, this is not so. He hasn't "reinvented the wheel" so to speak, and never suggested that he has. However, he has, indeed, expanded the methods by which scientists can access the minds of other animals, and this is an important move.

Another important question needs to be addressed: Are the emotional lives of other animals exactly the same as those of humans? Scientists really don't know, and that isn't an important issue: Different people experience joy and grief differently, for example, but we don't say that if those emotions differ then one person feels something and the other doesn't. My sisters and I responded to, and grieved, the death of our parents rather differently, however we all felt deep grief at their passing. Similarly, dogs and other animals surely show individual differences in how they experience various emotions and this also is an intriguing area for future research, a point I emphasized in my books The Emotional Lives of Animals (New World Library, 2008) and, with Jessica Pierce, Wild Justice: The Moral Lives of Animals (University of Chicago Press, 2010).

Move over B F. Skinner and those who defy and deny what scientists know by continuing to claim that people who say that other animals have rich and deep emotional lives are being overly sentimental and "soft", anthropomorphic and non-scientific. They're wrong. 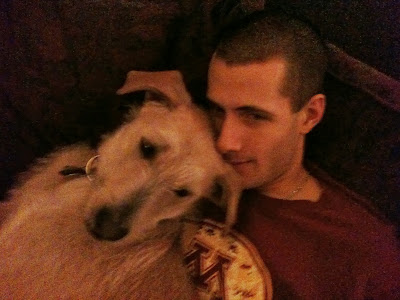 Above: Eddie and Phil.