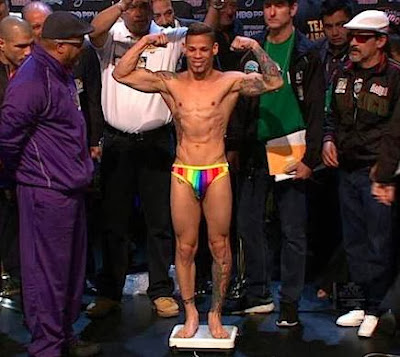 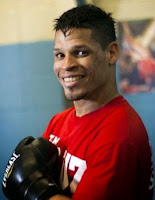 I mean, he's the first boxer to declare publicly that he's gay; he's currently ranked No. 4 among featherweights by the World Boxing Organization (WBO); he's a thoughtful and articulate role model for living a life of authenticity, and he looks great in a pair of rainbow-colored briefs!

Of course, as you may already know, Cruz suffered a professional disappointment this past weekend when his attempt to become the first openly gay boxer to win a world title was thwarted by Mexican boxer Orlando Salido. More about that later.

First, here's a little of how Cruz explained his decision to come out when speaking in October 2012 with Donald McRae of The Guardian.

I decided to be free. They can call me maricón, or faggot, and I don't care. Let them say it because they can't hurt me now. I am relaxed. I feel so happy. But to make this announcement to the whole world I had to be very strong. I have done well as a boxer, I've only lost two of my 21 fights. I won those other fights but, all this time, I have been living with this thorn inside me. I wanted to take it out of me so I could have peace within myself. I am proud to be Puerto Rican, just like I am proud to be a gay man. But I was sad and angry a long time because there are two doors to death over this one issue. There is suicidal death – when a gay man cannot stand being unaccepted and takes his own life. And there is homophobic murder. In both these situations I want to be a force for change. 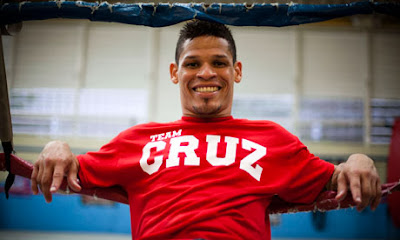 At around the same time as his interview with McRae, Cruz also spoke to Bob Velin of USA Today, noting that:

I've been fighting for more than 24 years and as I continue my ascendant career, I want to be true to myself. I want to try to be the best role model I can be for kids who might look into boxing as a sport and a professional career. 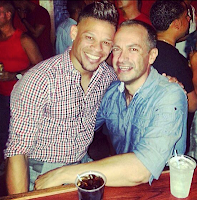 Well, he's certainly been – and continues to be – that!

I'm also sure that in his personal life, Cruz will continue to grow and blossom as an out gay man. And I have no doubt that his August 2013 announcement that he will marry his partner José Manuel (pictured with Cruz at left) is all part of his inspiring journey of authenticity.

The career of a professional boxer, however, is an unpredictable one. One day you're on top of the world, the next you're face down in the ring. Of Orlando Cruz's recent experience of this unpredictability, L.Z. Granderson of ESPN.com says the following:

But then very little in life, especially as it pertains to sports, goes the way it's supposed to.

A year had passed since the 32-year-old Cruz garnered global attention and support from the boxing community for publicly announcing his sexual orientation. The southpaw donned rainbow flag-themed trunks for the fight and had vowed to continue his historic run by upsetting the favoured [Orlando] Salido.

However, neither experience nor the crowd were on Cruz's side. Salido had twice held a piece of the title during a career that started 17 years ago aged 15 in his native Mexico. Ultimately he proved too tough an assignment for Cruz, who was appearing in his first major title bout after winning four consecutive fights against lesser competition. 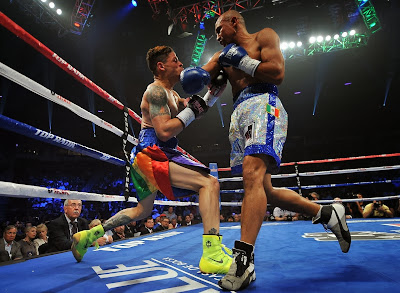 I appreciate Sean Ingle's words on Cruz's recent defeat in the ring, words that help put this disappointment in Cruz's professional life into a broader perspective.

Shortly after Orlando Cruz's forehead crumpled to the canvas in the early hours of Sunday morning, an act of involuntary genuflection wrought by a blunting right hook and left uppercut, his opponent Orlando Salido offered this verdict: "He's a good fighter, he moves well in the ring," he said. "But he's not anything special."

In boxing terms, Salido, now the WBO featherweight champion, was right. Cruz was defiant but he took a beating. At 32, he is unlikely to fight for a world title again. But we can also say this: by coming out as the first openly gay fighter, and then scrapping until his synapses were sparked, he will have chiselled away at fossilised perceptions and inspired others for generations to come. By that measure, Cruz is special indeed. 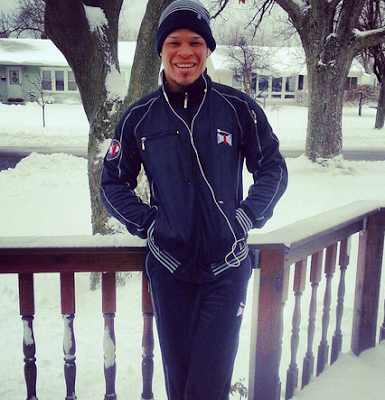