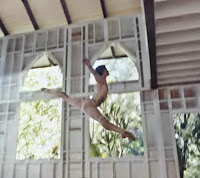 "Hey, this is tailor-made for you!"

So said my friend Mick in introducing me via a Facebook message earlier today to photographer David LaChapelle's stunning video of ballet star Sergei Polunin dancing to "Take Me to Church" by Irish musician Hozier.

Mick's absolutely right of course. I mean, this beautiful collaboration (which I share below) addresses the (often interrelated) issues and topics that greatly interest me and which I've written extensively about here at The Wild Reed: religion, sexuality, spirituality and, yes, dance.

Issues of religion and sexuality are clearly important to Hozier too. "Take Me to Church" is a blistering critique of religious anti-sexual attitudes and actions. For as Wikipedia notes about his powerful 2013 debut single:

Lyrically, "Take Me to Church" is a metaphor, with the protagonist comparing his lover to religion. The song grew out of Hozier's frustration with the Catholic Church's teachings about homosexuality. "Growing up, I always saw the hypocrisy of the Catholic church," Hozier claimed in an interview with Rolling Stone. "The history speaks for itself and I grew incredibly frustrated and angry. I essentially just put that into my words."

In an interview with The Irish Times, Hozier stated, "I found the experience of falling in love or being in love was a death, a death of everything. You kind of watch yourself die in a wonderful way, and you experience for the briefest moment–if you see yourself for a moment through their eyes–everything you believed about yourself gone, in a death-and-rebirth sense."

In an interview with New York magazine, he elaborated: "Sexuality and sexual orientation – regardless of orientation – is just natural. An act of sex is one of the most human things. But an organization like the church, say, through its doctrine, would undermine humanity by successfully teaching shame about sexual orientation – that it is sinful, or that it offends God. The song is about asserting yourself and reclaiming your humanity through an act of love."


. . . Every Sunday's getting more bleak;
a fresh poison each week.
"We were born sick," you heard them say it.

Take me to church,
I'll worship like a dog at the shrine of your lies;
I'll tell you my sins and you can sharpen your knife,
offer me that deathless death,
good God, let me give you my life.

. . . No masters or kings
when the ritual begins.
There is no sweeter innocence
than our gentle sin. 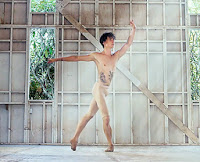 The original video for "Take Me to Church," directed by Brendan Canty and Conal Thomson, depicts the same-sex relationship of two men and the subsequent violent homophobic backlash.

Upon its release, Hozier said the video "references the recent increase of organized attacks and torturing of homosexuals in Russia, which is subsequent to a long, hateful, and oppressive political campaign against the LGBT community."

Hozier also notes that his song "Take Me to Church" was "always about humanity at its most natural, and how that is undermined ceaselessly by religious organizations and those who would have us believe they act in its interests. What has been seen growing in Russia is no less than nightmarish."

Upon its YouTube release in September 2013, the video quickly went viral, leading to Hozier's signing to Columbia Records.

To view the original video of "Take Me to Church," click here. 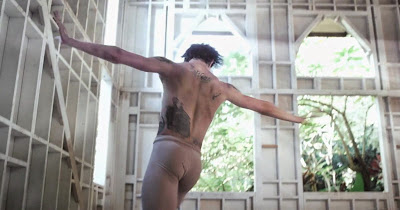 Related Off-site Link:
• Behind the Scenes of the "Take Me To Church" Video

See also the previous Wild Reed posts:
• The Art of Dancing as the Supreme Symbol of the Spiritual Life
• The Premise of All Forms of Dance
• The Dancer and the Dance
• The Soul of a Dancer
• The Church and Dance
• The Naked Truth . . . in Dance and in Life
• Recovering the Queer Artistic Heritage
• Gay Men and Modern Dance

He looks like your alter ego; the Superman to your Clark Kent.