No Room for Them 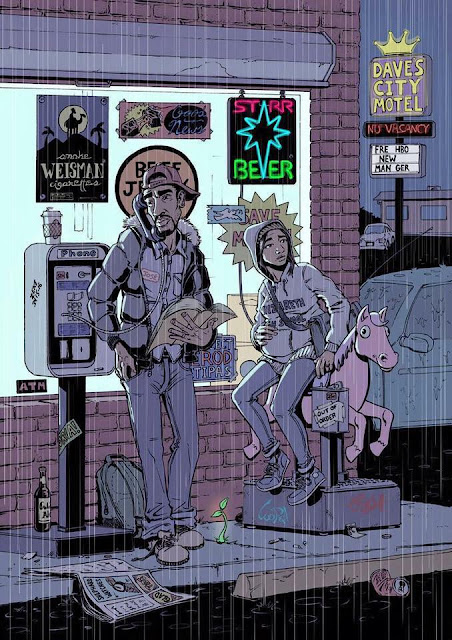 In 2014, the graphic novelist, Everett Patterson, of Portland Oregon decided to do a Christmas card in the vein of the graphic novel pioneer Will Eisner, "who so often depicted, with religious reverence, noble individuals enduring the many minor discomforts and petty indignities of urban America."

The result was a very untraditional nativity scene, perhaps on first blush, looking almost blasphemous, but more accurately depicting the true nature of the story than the typical nativity scene nowadays. The true story just wasn't as nice as we make it out to be in children's Christmas pageants.

In his Gospel, Luke hints at the indignities suffered by the Holy Family when he writes that there was "no room for them in the inn." Despite the twisting and hoop jumping of modern scholars who want to say that the inn was the last place Mary and Joseph would like to be, and that the grotto with the barn animals was preferred, the text itself indicates otherwise. Luke would not have mentioned the inn, if that weren't the preferred place to be. But the text doesn't say there was no room. The text says there was no room for them. And this is the cause for a little head scratching. How is it that Joseph can't find hospitable lodging for him and his pregnant wife in his home town? No uncles, or brothers? Why should he have to knock on the door of the inn in the first place? And do we really think the whole country side was so anxious to pay their taxes that the small inconsequential town a half an hour walk away from Jerusalem had absolutely no vacancies? Why would not one of these Middle Easterners so famed for their hospitality allow the young family to share quarters?

The answer is consequences. A whole village intent on making sure there were consequences for the improprieties of this young woman. Joseph taking her in rather than divorcing her or having her stoned was not doing "the right thing" according to these people. His response was corrosive to the moral fabric of the whole nation by sparing this young woman the consequences of her (apparent) actions. So there would be no room for them in the inn, lest their own daughters should be given wild ideas.

It would be just the beginning of the indignities Jesus would suffer, [. . .] indignities that would culminate in crucifixion. And that is what Everette depicts for us with this wildly popular scene full of hidden innuendos. (Look all over the picture to find details from the Nativity story in Luke's Gospel. How many can you find?) A modern-day Joseph and Mary, using the last pay phone in town, trying to find shelter across the street from the sort of motel that conjures images of Jesse Pinkman getting a root beer for Wendy from jailed vending machines. It's a dark world and the only hope is the shoot from Jesse's stem breaking through the concrete. A shoot that thirty some years later would be a tree bearing the fruit of life so that all of us would escape the consequences of our own indignities shared in failing to see Christ himself in the least of these.

Labels: Christmas, Something to Think About