The Origins of Mother's Day

Here’s a little known fact: the very first Mother’s Day was organized by Julia Ward Howe as a day of peace and reconciliation between the North and South after the American Civil War and to renounce war as an instrument of national policy.

Arise then . . . women of this day!
Arise, all women who have hearts!
Whether your baptism be of water or of tears!
Say firmly:
“We will not have questions answered by irrelevant agencies,
Our husbands will not come to us reeking of carnage,
For caresses and applause.
Our sons shall not be taken from us to unlearn
All that we have been able to teach them
of charity, mercy and patience.
We, the women of one country,
Will be too tender of those of another country
To allow our sons to be trained to injure theirs.”
From the voice of a devastated Earth a voice goes up with our own.
It says: “Disarm! Disarm!” 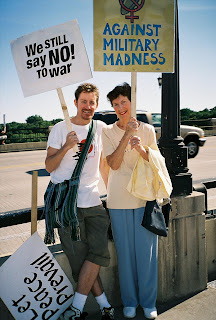 During the summer of 2005 my parents visited me in the U.S. from Australia. On July 27, Mum and I attended the weekly Wednesday afternoon peace vigil on the Lake St./Marshall Ave. Bridge. This bridge spans the Mississippi River and links Minneapolis and St. Paul. Earlier in the day, both my parents and I participated in the weekly vigil outside the corporate headquarters of Alliant Techsystems – Minnesota’s largest military weapons contractor, and the nation’s largest manufacturer of ammunition.

Is that Michelle Bachmann singing in the video?