“Take, All of You, and Eat”: Communion and the Rainbow Sash

Part 1 – What Motivates People to Wear the Rainbow Sash? 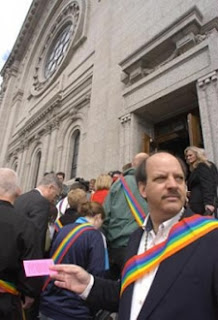 My friend Lisa Nilles has recently graduated from a local Catholic university. One of the papers she completed towards the end of her studies was entitled, “Take, All of You, and Eat”: The Recent History of Catholic Clergy Denying Communion to Baptized Catholics. A significant part of Lisa’s paper focuses on the denying of Communion to wearers of the Rainbow Sash.

As I’m sure most visitors to The Wild Reed are aware, the Rainbow Sash is a symbol that proclaims that its wearer is (or knows and affirms) a gay, lesbian, bisexual, or transgender (GLBT) person who embraces and celebrates their sexual orientation and identity as a sacred gift.

One of the many strengths of Lisa’s paper is that it outlines the history of the Rainbow Sash movement’s relationship with the archdiocese. It also contains an insightful interview with Dominica Brennan, O.P., of the Canonical Affairs Office of the Archdiocese of St. Paul/Minneapolis, as well as many powerful testimonies from people who donned the Rainbow Sash and were denied Communion during the 2005 and 2006 Pentecost Sunday masses at the Cathedral of St. Paul.

Although Lisa has given me permission to reprint her paper, I feel that the blogsite format doesn’t lend itself to such a lengthy publication. For this reason I’ve decided to share excerpts from Lisa’s paper over the next week or so. The entire paper will, however, be published shortly on the CPCSM website as a PDF file.

Lisa’s intention in allowing her paper to be so readily available is, she told me, to simply “get it ‘out there’ so that it can be of any use to anyone anywhere who seeks to understand, welcome, and advocate for complete GLBT inclusion in the Church.”

It is in this spirit that I share with you today some of the responses of the fifteen Rainbow Sash wearers interviewed by Lisa for her paper. These responses are to the question: “What motivated you to wear a Rainbow Sash and proceed to receive Communion at the Cathedral of St. Paul?”

What motivated you to wear a Rainbow Sash and proceed to receive Communion at the Cathedral of St. Paul?

[There was an earlier] event at the University of St. Thomas . . . [at] which the Office of Family Life [held] a conference to argue against gay marriage. So my motivation [to be present at the cathedral] was a desire to let the Catholic Church know our son is as much a child of God as are his three siblings. . . . Instead of referring to him as “disordered,” he should be welcomed as a full sacramental member in the Church.

To celebrate the intrinsic goodness of my lesbian daughter and every other GLBT child of God. If solidarity with the marginalized is perceived as resistance to Church teaching, so be it.

This is, I think, the fourth year my wife and I attended this Pentecost service [at the cathedral]. We are involved in a number of social justice issues and solidarity with GLBT persons is an important extension of that outreach, made more personal to us because we have a lesbian daughter. My daughter is right when she says, “My folks would be involved even if they didn’t have me because that’s who they are.” I am proud of that and will do anything nonviolently to counter the prejudice and bigotry of the Catholic Church.

I am very involved in my church and in the National Association of Catholic Diocesan Lesbian and Gay Ministries (NACDLGM). A major part of my identity is my membership in the Catholic community, but as a lesbian Catholic, I often feel discriminated against and unwelcome in the institutional church (though at the local level, I’ve always found very supportive and affirming people). The documents that continue to come from Rome and from our bishops are extremely hurtful, especially to young GLBT Catholics who don’t yet have a strong sense of God and of themselves as beloved by God. As a professor, I once had a student send me a cry for help in the form of an e-mail where she commented, “I’ve been in a relationship for two years now, and it’s been God’s greatest gift to me, but I’m going to hell because it’s with another woman.” That’s the kind of psychological binds the Church places people in – they recognize and embrace the gift of God, but feel condemned because the Church tells them that what they are experiencing is evil. This will never change until more of us come out and are open about who we are and what our experience of grace and love has been. I chose to participate in the Rainbow Sash because it’s essential that the body of Christ see us for who we really are: people committed to the Church and eager to be recognized and to have our gifts affirmed. Unlike race, sexual orientation is invisible, and the Church prefers that we would remain invisible. Things will never change until we are seen. The Rainbow Sash is an attempt to make visible the GLBT people among us.

I have a son who is 6'2" with dark curly hair, marvelous design skills, who is a plain old fashioned good person who just happens to be gay. I am tired of “my” Church ignoring his many qualities in order to focus on the mystery of his sexuality which, because they cannot understand, they chose to condemn. So I thought this a good way to show my unconditional support for him and all who share this mystery.

I grew up Catholic. I don’t believe that any Catholic should be forced to choose between their God-given sexual orientation and their faith community. Denying GLBT Catholics fair and open participation in Catholic worship and community is profoundly anti-Catholic and a form of spiritual violence.

I feel very strongly that Jesus invited everyone to the table when at the Last Supper. He invited us to, “Do this in memory of me.” He did not say anything about excluding anyone, just simply, “Remember me.”

NOTE: In Part II of “Take, All of You, and Eat,” Rainbow Sash wearers talk about their emotional and intellectual responses to being denied Communion.


See also the previous Wild Reed posts:
My Rainbow Sash Experience
“Receive What You Are, the Body of Christ” – Reflections on the Eucharist
Trusting God’s Generous Invitation
Celebrating Our Sanctifying Truth
Truth Telling: The Greatest of Sins in a Dysfunctional Church
Thoughts on Authority and Fidelity
Reflections on the Primacy of Conscience
The Question of an “Informed” Catholic Conscience
Voices of Parental Authority and Wisdom
Who Gets to be Called “Catholic” – And Why?
Comprehending the “Fullness of Truth”
The Many Forms of Courage
Take This Bread

Image: AP Photo/Janet Hostetter. The caption accompanying this photo at CommonDreams.com reads as follows: “Charlie LaPierre, right, greets Rainbow Sash Alliance supporters outside the Cathedral of St. Paul, in St. Paul, Minnesota, Sunday, May 15, 2005. A group of about 100 gay Roman Catholics and their supporters were denied Holy Communion at Pentecost Mass at the Cathedral. The Rainbow Sash Alliance has been taking Communion on Pentecost at the Cathedral for the past four years, but Archbishop Harry Flynn changed the policy this year.”