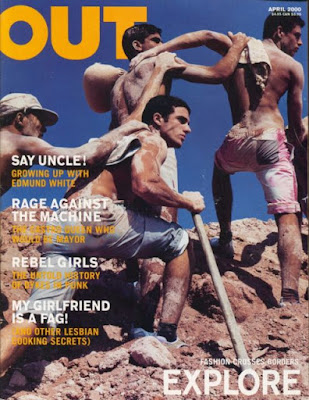 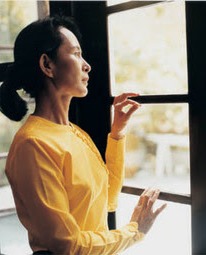 Awarded the Nobel Peace Prize in 1991, Aung San Suu Kyi is the non-violent, pro-democracy activist and leader of the National League for Democracy in Burma. She has been kept under a state of house arrest by the military dictatorship of Burma since 1989.

To mark the occasion of Aung San Suu Kyi’s birthday, I’d like to share the first ever “political” commentary I had published – one that, as you’ll see, refers to events, or rather conditions, in Burma and their connection to corporate-led globalization. I also highlight (and lament) the gay community’s “selling out to corporate rule” - which is the “lose/lose situation” of my commentary’s title.

This particular commentary was published in the June 30, 2000 issue of the Twin Cities’ Lavender magazine. I wrote it as founder of the now defunct group Queers United for Radical Action (QURA).* Reading it seven years on, I can only smile at what a firebrand I was back then!

A Lose/Lose Situation
By Michael Bayly

Editor’s Note: The following piece was written by a reader in response to Paul Varnell’s commentary, “This March Is Sponsored By . . .” (Lavender, May 19, 2000).

Recently, OUT magazine concocted a “fashion spread” for its April 2000 edition. Entitled “Burmese Dreams,” this eight-page piece was the usual pathetic attempt to sell overpriced and, in this case, supposedly Burmese design-inspired clothes to gay men.

What made this particular marketing ploy especially repugnant was the fact that OUT magazine editors not only approved the putting of brown face paint on a Caucasian model, but also showed this model holding various tools and implements used in Burma’s slave labor camps.

These camps, established by Burma’s brutal military dictatorship, and populated by an estimated six million men, women, and children, serve the interests not only of the corrupt military regime, but also of Western corporations which profit from the military’s trampling of human, labor, and environmental rights in Burma.

This situation typifies the result of corporate globalization’s bottom line – profit above all other concerns. Though the case in Burma is perhaps the most extreme, the reality is that transnational corporations, based predominately in the United States and other northern hemisphere nations, and concerned primarily with auto, textile, and oil production, reap huge profits from exploiting the people and natural resources of nations in the southern hemisphere – be they in Southeast Asia, Africa, or Central and South America.

It is this state of affairs that Paul Varnell would have the GLBT community uncritically embrace – all for the “successful” advancement of the movement.

Varnell insists that the co-opting of the GLBT movement by corporate entities is a “win/win situation.” Yet in reality, the total, unquestioning acceptance of corporate influence of the sort Varnell advocates ensures, in any social movement, that the fundamental task of decision-making is inevitably, and often subliminally, transferred from the people to business “elites.” In other words, we get duped.

“Of course you’re accepted!” we’re told. “We’re marketing our product in a special way so that you will buy it and know that you are just like everyone else.” Many of us, however, do not want to be “just like” the consumerist junkies who comprise our society’s mainstream.

Furthermore, in the setup advanced by Varnell, power and direction are no longer channeled from a sense of egalitarianism and a base of democracy, but from a system of plutocracy – the rule of money. This is the “solid and reliable” reality Varnell would have us embrace – a reality that ensures our exploitation as surely as it is currently ensuring, through corporate globalization, the exploitation of millions of people and the environment.

Sponsorship and commercial arrangements may be as “American as apple pie,” as Varnell suggests, but other values – call them “meat-and-potato” values, if you like – should take priority if we are to maintain a healthy values system: human and environmental rights, for instance, or active resistance to greed and oppression.

Now, we all know what happens when we gorge ourselves on apple pie without first having a substantial meal of the basics. Yet, unfortunately, many in the GLBT community seem to be skipping the basics and heading straight for the “extras.” The results are draining our movement of vitality, vision, and credibility. OUT magazine’s aforementioned “fashion spread” is clear evidence of this.

As a gay man, I know whom I stand in solidarity with – and it’s not corporate America, whose greed ravages the people and environment of the planet. I didn’t undertake the painful journey of coming out from the closet of ignorance, denial, and oppression to ignore, deny, and oppress others. Yet alignment with corporate mantras such as “profit over all else” and “motives count for absolutely zero,” regardless of how “solid and reliable” they may appear to some, does just that.

Thankfully, there’s resistance to the GLBT community’s selling out to corporate rule. Many individuals and groups boycotted the recent Millennium March due to its overt corporate pandering. Of those who did attend, many noted a distinct blandness about the event, and longed for the spirit of creativity, adventure, and political consciousness of past events.

Closer to home, another example of this resistance is the Minneapolis City Council’s recent passing of a Selective Purchasing Agreement, which directs the city away from corporations and companies (such as 3M) that do business with Burma’s military regime. Though the measure was vetoed by Mayor Salyes Belton, whom many believed to have bowed to pressure from powerful corporations such as American Express, the initial passing of the measure was a hopeful and inspired moment.

The driving force behind getting the Burma Selective Purchasing Agreement presented and passed, albeit briefly, was Twin Cities resident Mick Schommer [right]. A gay activist, Schommer, like many individuals and groups within numerous and diverse communities, demonstrates the capability of making the connection between all forms of oppression. And as recent events in Seattle (against the World Trade Organization) and Washington, D.C. (against the World Bank) attest, this “connection” is increasingly being recognized as unfettered capitalism manifested in a distinctly corporate form of globalization which values profit over all other considerations.

The selling out to corporate rule is a betrayal of all that makes our journey as GLBT people and as authentic human beings unique – heightened conscious insight, increased creativity and inclusivity, and greater compassion. It also implicates us in the exploitation of others and the environment.

* QURA was a network of LGBTQI activists involved in a diverse range of social justice issues. The network was dedicated to educating itself and the wider LGBTQI community on the threats to democracy, human life, and the environment posed by the nexus of corporate globalization, militarism, and environmental degradation. QURA also sought to organize and participate in educational and non-violent direct action events in order to facilitate positive and radical social and economic change, and to facilitate and share a uniquely queer spirit of resistance to all forms of oppression.


Related Off-site Link:
Faces of Resistance: Images and Stories of Progressive Activism at the Turn of the Millennium (1997-2006) – Michael Bayly.

That was well written and it rings as true today as it did when it was written. In my view, full human liberation is not possible unless we free ourselves from the chains of the corporate ruling class, and liberation movements should not be compartmentalized. You can't support one form of liberation in one breath and then support oppression in the next.

Thanks for your positive feedback.