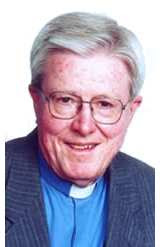 Why is it so often that it’s retired Roman Catholic bishops who make the most sense?

I know, I know . . . it’s a bit like retired military generals. Once free from the threat of censure or firing, they often find the courage to speak truthfully about the realities of war – often to the chagrin of political leaders.

So too with Roman Catholic bishops, and their willingness to speak truthfully about the state of the Church. Case in point: recently in Australia, Retired Bishop Geoffrey Robinson (pictured above) has made the rather obvious observation that “the [Roman] Catholic Church needs to reverse 2,000 years of teaching on sex and power.”

I’m glad the bishop refers to his call for reform as “radical.” All too often people mistake this word for meaning “extreme.” That’s not what “radical” means. It means to go to the root, to recognize and address the underlying issues and/or problems. As you can see, I’m all for reclaiming the word “radical.”

Anyway, Barney Zwartz of The Age of Melbourne reports on the bishop’s radical and prophetic call, ahead of the publication in Australia of a new book by Bishop Robinson entitled, Confronting Power and Sex in the Catholic Church: Reclaiming the Spirit of Jesus.

The Catholic Church is still not serious about confronting sexual abuse, only “managing” it, according to the Sydney bishop who headed Australian efforts to tackle abuse.

Bishop Geoffrey Robinson says the Catholic Church needs to reverse 2000 years of teaching on sex and power as part of radical reforms from the Pope down.

While it refuses to look at some fundamental teachings — including sex outside marriage, women priests, homosexuality and papal power — the culture that produced and protected abusers will continue, he says.

These explosive claims — unprecedented for a bishop — are in a book to be launched tomorrow: Confronting Power and Sex in the Catholic Church.

Bishop Robinson, 70, who was abused as a child, headed the Australian Catholic Bishops Conference professional standards committee for a decade until he retired because he was so disillusioned in 2004.

Calling for the most radical changes since Martin Luther started the 16th century Protestant Reformation, Bishop Robinson says the Pope has failed the church, and the church has failed its members.

“I’m aware of how radical the call I’m making is. I’m looking for a very different church,” he told The Age.

He said the response of the church, especially the Vatican, to the sexual abuse crisis did not go deep enough. “The most profound factor about sex is that the church has had a morality for 2000 years based on offences against God and I find that quite inadequate. I ask if we should move to a morality based on relationships, on good and harm to people.”

[. . .] He suggests there is “a crying need” in the Catholic Church to reconsider such issues as sex outside marriage, contraception and homosexuality. “The responsibility appropriate to adults must not be reduced to the obedience appropriate to children, and too often that happens in the church. I don’t think God does that.”

To read “Bishop Calls for Catholic Reform” in its entirety, click here.

To read the introduction to Bishop Robinson's book Confronting Power and Sex in the Catholic Church: Reclaiming the Spirit of Jesus (in PDF format), click here.

See also the previous Wild Reed posts:
Chris McGillion on the “Exacerbating Actions” of Cardinal Pell
The Two-Sided Catholic Crisis
Beyond Papalism
Authentic Catholicism: The Antidote to Clericalism
Paul Collins and Marilyn Hatton
Uncle Vince is at it Again
It’s Time We Moved Beyond Theological Imperialism
Pan’s Labyrinth: Critiquing the Cult of Unquestioning Obedience
Thoughts on Authority and Fidelity
Rita Larivee on Being “Authorized by Baptism”

You beat me to it - I just posted something about this too.