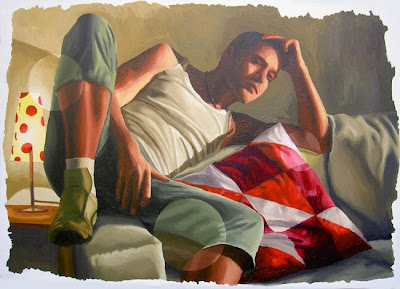 In these excerpts, Ó Murchú examines how “consecrated celibacy in all the religious traditions is based on a spurious understanding of human sexuality” – one that is “fundamentally violent to both God and people.”

Specifically, Ó Murchú identifies and analyzes the “patriarchal reductionism” of sexuality – a “darkness of ignorance and superstition [that] may well be the greatest violence the world has known.”

In all the great monastic systems, celibacy denotes single-mindedness, an unencumbered devotion to God and to the development of the spiritual life. Implicit in this ideal is a cultural antagonism toward sexuality as something that is a fundamentally alien to God and to spiritual growth. The assumption seems to be that spiritual growth and sexual fulfillment do not blend well together.

Consecrated celibacy in all the religious traditions is based on a spurious understanding of human sexuality, one I suggest that is fundamentally violent to both God and people. Sexuality is portrayed as belonging to the unruly passions and instincts which distract from the things of God. Sexuality is about pleasure and joy, which strangely we find unable to attribute to God and to God’s creativity in the world.

And this leads us to deeper considerations. Sex in itself is not just the problem. There are several religious hang-ups around the human body and its God-given processes. The body tends to be dualistically opposed to both the soul and the spirit. The body is deemed to be earthy, materialistic, prone to sin, an obstacle to the workings of divine grace. Consequently, the discipline and subjugation of the body plays a major role in early Christian asceticism and indeed in the monastic systems of all the great religions. Since sexuality is an integral dimension of our embodied existence the alienation of the body in the name of spiritual growth further convolutes the anti-sexual polemic that was already quite virulent.

Since the unfolding spiritual vision was very much the product of men and male thought patterns, it is not surprising that the female body and female sexuality became the primary and greatest casualty of this violent spirituality. Ironically, women, despite all their deficiencies, were deemed to be capable of strong sexual allurement, and their sexuality, more so than that of men, was deemed to be particularly unruly. The consequences are all too obvious even in the contemporary world. And the final aspect of this strange quagmire is the body of the earth itself; that, too, was to be shunned and spurned. Those called to the vowed celibate life were to flee the world, abandon it, and hate it as much as possible. The world, the flesh, and the devil all belonged to the one despicable package. Only a radical denial of all three, especially in the sexual realm, could guarantee entrance into life eternal.

Up until recent times we assumed that the anti-sexual polemic was inherent to religion generally and to Christianity in particular. This is the way God ordained things (although for centuries people have suspected that this was not the case), and to question the package is to deny divine revelation itself. So we developed spiritual strategies to cope (and allegedly grow in grace); we offered it up in sacrificial obedience to the will of God, and the more heroic we were in discipline and asceticism the greater would be our reward in the life to come.

For much of the Christian era, we were neither encouraged nor allowed to ask questions. Christian subservience required total and unquestioned submission, until people began to realize that that was more about man’s (literally) way of doing things rather than God’s. People at all levels of religious adherence began to adopt “a hermeneutic of suspicion.” We began to leave behind a religious infantilism and grow up – often painfully – into the freedom and courage that belong to the children of God.

A liberating option and, at times, a frightening one! Particularly frightening as one begins to realize that even God himself/herself has also been subjected to patriarchal brainwashing. We begin to realize that formal religion may be more of a human invention than a divine creation. We discover, thanks to several breakthroughs of modern science, that God has been creatively at work in the world for billions of years, yet religions construe the divine revelation as if it all happened merely in the past few thousand years. The extent to which formal religion has kept people in the darkness of ignorance and superstition may well be the greatest violence the world has known in the past five thousand years.

And as we unveil the ancient spiritual story of our human and earthly evolution, we reconnect with powerful spiritual movements that resonate deep in our primitive soul. We reconnect with the sacredness of our earth, with the female face of God known to humans for over thirty thousand years during Paleolithic times, with the creative unfolding of God displayed in cycles and seasons of both the earthly and human body, and, finally, with sexuality, the primary source of ecstatic energy considered to be the core of God’s own prodigious fertility.

Along comes religion, the final invention of the patriarchal will-to-power, and out goes all that had been happening for over thirty thousand years with the focus on the Great Earth Mother Goddess. That was the “paganism” that formal religion sought to eliminate. Little wonder that humanity today finds itself in the depths of alienation; little wonder that people in their thousands are flocking out of the mainstream religions.

In Part III of “Thoughts on Celibacy,” Diarmuid Ó Murchú’s suggestions for “undoing” patriarchy’s “violent subversion” of sexuality will be presented, along with his contention that “the integrity and authenticity of the call to celibacy is not dependent upon the ascetical ability to forego sexual engagement,” but upon a “quality of engagement” – emotionally and spiritually – with “the major sexual questions of our time.” Such engagement, insists Ó Murchú, will ensure that we touch “the very depths of sexual aestheticism,” and will call for the “vow of relatedness.”

For Part I of “Thoughts on Celibacy,” click here.


For more of Diarmuid Ó Murchú’s insights, see the previous Wild Reed posts:
• Authentic Catholicism: The Antidote to Clericalism
• Reflections on Babel and the ‘Borders Within’

See also the previous Wild Reed posts:
• The Non-negotiables of Human Sex
• The Sexuality of Jesus
• Joan Timmerman on the “Wisdom of the Body”
• In the Garden of Spirituality: Joan Timmerman

Opening Image: “Eitan” by Raphael Perez, who generously allows his artwork to be used for free and for any use other than commercial. To view more of Raphael’s artwork on The Wild Reed, visit Sons of the Church: The Witnessing of Gay Catholic Men – A Discussion Guide.

beautiful text
with you all the best
and thanks for using my artworks :-)