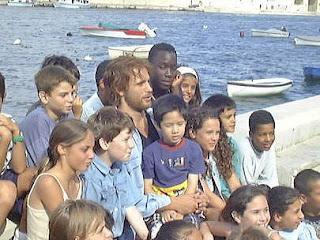 As you’ve probably gathered from recent posts, I’ve been reading, during Holy Week, Marcus Borg and John Dominic Crossan’s The Last Week: What the Gospels Really Teach About Jesus’ Final Days in Jerusalem. I’ve found it a very insightful and, in many ways, inspiring book.

As Holy Week concludes for 2008, I’d like to take this opportunity to share the following excerpt from that part of Crossan and Borg’s book that offers reflections on Easter Sunday.

Two themes run through [the Gospel] stories that sum up the central meaning of Easter. The first, in a concise phrase, is Jesus lives. He continues to be experienced after his death, though in a radically new way. He is no longer . . . confined to time and space, but [is] a reality who can enter locked rooms, journey with followers without being recognized, be experienced in both Galilee and Jerusalem, vanish in the moment of recognition, and abide with his followers always, “to the end of the age.”

Together, the appearance stories in the gospels make explicit what is promised in Mark: “You will see him.” They underline the parabolic meaning of Mark’s story of the empty tomb: Jesus is not among the dead, but among the living. Indeed, this is one of the central affirmations of Easter: Jesus lives. He is a figure of the present, not simply the past. The presence his followers had known in Jesus before his crucifixion continued to be experienced and to operate after it.

. . . [T]he truth of the affirmation “Jesus lives” is grounded in the experience of Christians throughout the centuries. Not all Christians have had such an experience. It is not essential. To quote from one of John’s Easter stories, “Blessed are those who have not seen and yet believe.” But some Christians to the present day have experienced Jesus as a living reality. For us, this is the experiential ground of the first of the central Easter affirmations: Jesus continues to be and to operate. The spirit, the presence, his followers knew in him before his death continues to be known. Jesus lives.

To state the second affirmation of the Easter stories in an equally concise phrase: God has vindicated Jesus. God has said “yes” to Jesus and “no” to the powers who executed him. Easter is not about an afterlife or about happy endings. Easter is God’s “yes” to Jesus against the powers who killed him. The stories underline this in different ways. In Luke and John, the risen Jesus continues to bear the wounds of the empire that executed him. In Matthew, the risen Jesus has been given authority over all the authorities of this world. Mark, writing most concisely among the authors of the gospels, says simply, “You are looking for Jesus of Nazareth, who was crucified; he has been raised.”

The authors of the gospels do not speak about Jesus’ resurrection without speaking about his crucifixion by the collusion between collaborators and imperial power. In the words of the earliest and most widespread post-Easter affirmation about Jesus in the New Testament, Jesus is Lord. And if Jesus is Lord, the lords of this world are not. Easter affirms that the domination systems* of this world are not of God and that they do not have the final world.

Opening Image: A still from the final scene of the 2000 made-for-television film, Jesus. On her always insightful and interesting weblog, Perspective, Crystal notes that Jesus “had an unusual ending, one that [CBS Television] cut from the American version because it was thought too controversial.” That alone piqued my curiosity! Reading Crystal’s post further I learned that in the film’s final scene, set after the resurrection, Jesus tells his disciples that he will be with them always, even to the end of the world. The film than shows Jesus (played by Jeremy Sisto) in a modern day setting with a number of children. Hmm, I wonder who exactly the folks at CBS thought they’d be offending by retaining such an ending? The company’s decision to omit it seems to me to have been an unduly cautious and conservative one.


* According to Crossan and Borg, the phrase “domination system” is shorthand for the most common form of social system – a way of organizing a society – in ancient and pre-modern times, that is, in pre-industrial agrarian societies. It names a social system marked by three major features:

1. Political oppression. In such societies the many were ruled by the few, the powerful and wealthy elites: the monarchy, nobility, aristocracy, and their associates. Ordinary people had no voice in the shaping of the society.

2. Economic exploitation. A high percentage of the society’s wealth, which came primarily from agricultural production in pre-industrial societies, went into the coffers of the wealthy and powerful – between one-half and two-thirds of it. This was achieved through structures and laws about land ownership, taxation, indenture of labor through debt, etc.

3. Religious legitimation. In ancient societies, these systems were legitimated, or justified, with religious language. The people were told the king ruled by divine right, the king was the Son of God, the social order reflected the will of God, and the powers that be were ordained by God. Of course, religion sometime became the protest against these claims. But in most pre-modern societies known to us, religion has been used to legitimate the place of the wealthy and powerful in the social order over which they preside.

Crossan and Borg also point out that: “There is nothing unusual about this form of society. Monarchical and aristocratic rule by a wealthy few began about five thousand years ago and was the most common form of social system in the ancient world. With various permutations, it persisted through the medieval and early modern periods until the democratic revolutions of the last few hundred years. And one could make a case that in somewhat different form it remains with us today. In this sense ‘domination systems’ are normal, not abnormal, and thus can also be called the ‘normalcy of civilization’ . . . At a broad level of generalization, Good Friday is the result of the collision between the passion of Jesus [for God and God’s justice] and the normalcy of civilization.”


See also the previous Wild Reed posts:
The Triumph of Love: An Easter Reflection
Light of Christ (Easter 2008)
He is Risen! (Easter 2007)
A Wretched Death, a Wretched Burial
Blaming the Jews, Canonizing Pilate
Palm Sunday: “A Planned Political Demonstration”
Palm Sunday Around the World (2007)
“Here I Am!” - The Lenten Response
The Lenten Journey

Thanks for the mention. On this very cluttered :-) Hollywood Jesus page, you can see all the changes that were made between the US tv and the international versions of the movie Jesus.